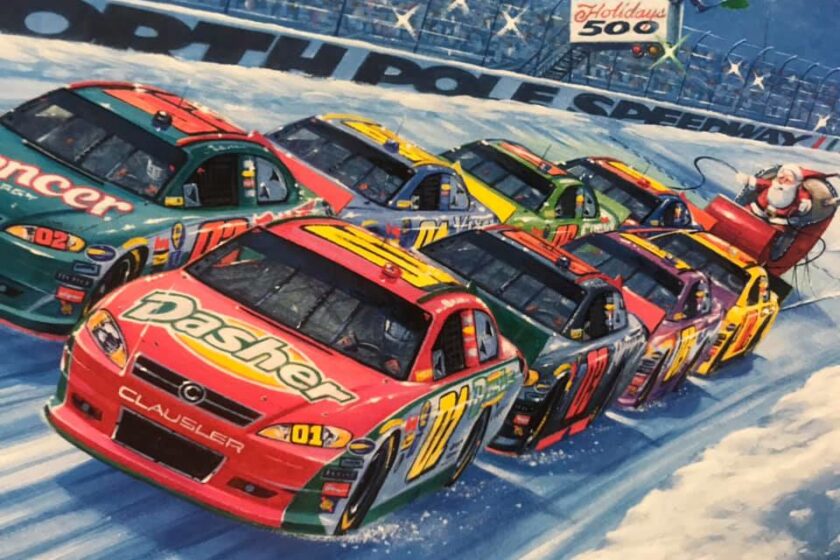 Listen, Joey, we know Shell’s colors are red and yellow, not red and green, but it’s Christmas, and that driver’s suit with the tinsel and sleigh bells, well, we’re going to auction it off after the race, and it’ll bring big bucks for charity. Goodyear swears the rubber on these sled runners will make you go faster than tires, too. It’s going to be great!

Most of us have a Christmas morning tradition (even many who aren’t part of the religious faith that’s responsible). Opening presents likely plays a part, as does breakfast, whether the kind that would have fed all of Bethlehem or something weirder, like toast with holiday-wrapped candy. Church was more likely last night, but that’s possible, too.

So what should come next? “OK, everybody, let’s get dressed. We’ve got to leave in half an hour or we won’t get good seats at the race.”

After all, watching NBA basketball on Christmas Day has been going on for years, and while the NFL hasn’t embraced the idea quite as wholeheartedly, when it suits – like this year with Christmas on Sunday – you’ll have plenty of football choices – that’s American football; the Premier League in Europe is quiet. Other sports at least occasionally join the party.

(Interesting, I read an article in a college newspaper asking students whether this was appropriate, and one questioned it a bit, then noted that police, firefighters, and at least some people in service positions or retail have to work, so why should highly paid athletes be any different. Don’t know that I’d ever thought about it that way.)

I’m sure that somewhere, somebody has held a race on Christmas, but the closest NASCAR has ever come was the infamous Grand National/Cup race at Savannah (Georgia) Speedway on December 29, 1963, when Richard Petty outran 22 other drivers to score a lap victory over Jack Smith. For the record, Jack Anderson of Pearisburg, Va., hauled his Ford more than 400 miles to race (a 6-7 hour trip even today, using interstates that didn’t exist in 1963), only to wreck after running 72 laps and take home $60 for his effort.

Savannah really shouldn’t count, because it was a desperation make-up date for a rained-out event . . . and they didn’t use the date again.

NASCAR used to run Grand National/Cup races on other holidays, specifically Memorial Day, July 4, and Labor Day. Now they’re typically the closest Sunday or Saturday night to those holidays. I suspect that’s because more people have to work on holidays today; small businesses used to close, but today – with WalMart open and Amazon ALWAYS an option, you can’t afford to close and lose the business to them. If you’re open for business, nobody can go to the race. Kind of sad.

I loved it when North Carolina had Easter Monday as a state holiday, and TriCo Speedway (now Orange County) ran a special late model sportsman (and later late model stock car) race that afternoon. Daytona’s July 4 Firecracker 250/400 advertising claimed that the 10:00 a.m. starting time would have you on the beach by 2:00/2:30.

Now everybody works all the time. As I rolled back into my neighborhood from church today (I’m writing this on Sunday), there was an Amazon Prime truck going one way and a U.S. Postal Service van taking non-Prime Amazon boxes the other way.

Maybe, though, a good race run in a warm area could draw enough of a television audience that it wouldn’t really matter how many fans could get away from work/church/family to attend in person. If live racing was available on TV on Christmas Day, would you watch?

If it was the right race, I would. If the right race was up against football or basketball, no contest. Just push that pile of wrapping paper away from the TV, and add yet one more thing for which to give thanks.

(PHOTO CREDITS – Our “cover photo/drawing,” as well as the drawing of Santa climbing into a race car, are from White’s Pit Stop, www.wpsracing.com, which sells these as Christmas cards. The Jack Anderson model is from Racin Grafix. The TriCo Speedway Easter Monday ad is from Racers Reunion, maybe by way of TMC Chase down in Tennessee. The Christmas tree stock car ornament was on eBay.)