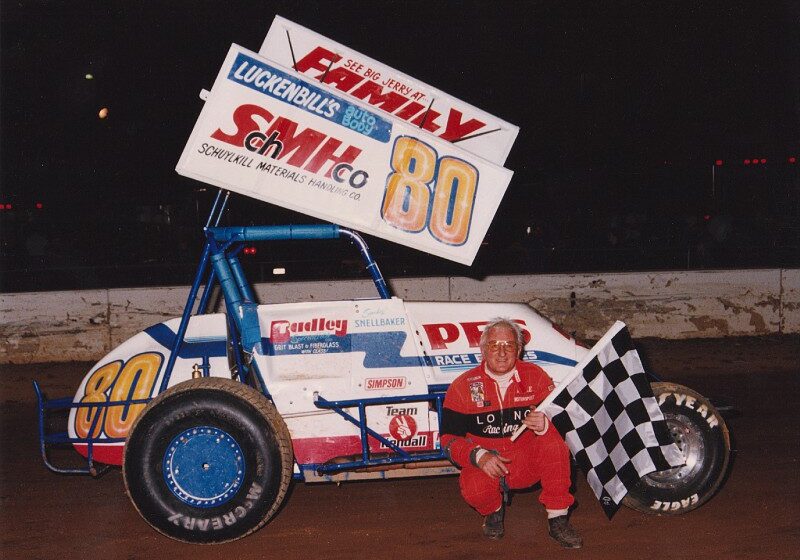 (The author is meandering through a life of race-fandom, while he still remembers at least some of it.  Part 4 of the Six Decades series, if you missed any part, click here.)

Our 1985 move from Central North Carolina to South Central Pennsylvania (about three miles north of the famed Mason-Dixon Line) brought some jarring cultural changes: the roads had “guide rails” instead of “guard rails”; snow “laid” on the ground rather than “sticking”; nobody said “y’all” (a few actually said “y’uns”), and – worst of all – there was no pork BBQ to be found.

Also, there wasn’t a paved short track running late models within two hours (and that was two states away in Manassas, Va.). There were something like half a dozen tracks within an hour, but most raced sprint cars, and we stock car addicts looked WAY down on anything that couldn’t rub fenders.

Since we moved in September AND had to deal with Sandy having a baby a few weeks later, all racing kind of took a back seat, but in late October or early November I ventured to Hagerstown Speedway, about 45 minutes away and across the state line in Maryland, to see a doubleheader of stocks and sprints, the latter just because I had no choice.

The surprise was I liked sprint car racing.

Late in the ’86 season, I also got to Lincoln Speedway (less than 45 minutes east, near where I would later finish my working career) for an enduro race, which started something like 75 cars and was enormous fun . . . but that wasn’t what you’d want to do every Saturday night.

Still, I was a stock car fan, so the next season, when racing cranked up, I started looking for places running stocks. An ad in the local paper for a place called Silver Spring Speedway near Harrisburg caught my attention, because it featured “sportsman” cars, and the only racers I’d ever seen called that were stocks.

So, I headed north (about an hour) one Saturday night, and my life changed.

“Sportsman” turned out to be called “Super Sportsman,” and they certainly proved themselves to be “super.”

The cars look like sprints but with different – much more basic – chassis, and rules were kept simple and unchanged enough for drivers to remain competitive in cars 15-20 years old.

A night at “the Springs” also included limited late models and street stocks, and the normal car count for that three-division show was usually over 120, with the super sportsman cars generally drawing 50-60 entries.

All that meant that it usually took 15 or more heats and consolation races to set the fields, so even with a 6:00 p.m. starting time, racing frequently continued past midnight.

And what racing it was. The big plus was handicapping: the points leader in the lead class could start as far back as 16th in the field, so there was passing on every lap, and the races were fantastic.

Sadly, the track was in an area that eventually built up with commercial development (and residential wasn’t far away). Even with a huge weekend flea market and a small mobile home park, the finances couldn’t work forever, and government officials made their desire for another property use to replace the track, so after 2005, Silver Spring closed and was replaced by a large shopping center. The magic was gone.

As mentioned earlier, at least there were other nearby tracks. Lincoln became the default, and the sprint car racing there was really good. Williams Grove – one of the most famous sprint car tracks in the country – was an occasional stop, as was Susquehanna, which ran different programs, depending on the promoter.

Excluding the Hunterstown Speedway go-kart track, Trail-Way Speedway was the closest, running smaller or less expensive classes. For one year in the early 2000s, it became the default when our son raced there in micro sprints. He suffered because he didn’t have a father who could work on his car – I could write about him, but that didn’t help weekly performance at all – and when his mechanic went back to motorcycle motocross racing, his career ended. I feel somewhat responsible for that.

Occasionally there were trips to the more distant paved tracks, Manassas to the south, and Jennerstown, about three hours to the west. Fun, but too far.

But there was another element to the racing life then, and it went beyond being a fan. When Paul Sawyer completed his dream of a fully competitive NASCAR track at Richmond and built Richmond International Raceway on the site of the old Richmond Fairgrounds Raceway, he added Dave Fulton to the public relations staff. Dave asked me if I wanted to volunteer as an extra PR staff member on race weekends.

That led to 25 years of “weekend warrior” work at the speedway (eventually with a paycheck), starting with interviewing drivers (back before that task was centralized with the manufacturers’ PR folks), then writing for the track website, and finally serving as office manager for the Infield Media Center. It was an exhausting job – typically around 45 hours over three days – but most of the people were fantastic, and I wouldn’t have given it up for anything.

A handful of highlights:

Obviously, there were lots of other moments, some not highlights. I was yelled at by a couple of famous drivers who were angry at race’s end and didn’t want to be interviewed, and I had to take over postrace activities when the PR director needed to address a spectator death in the parking lot during a race. When Jerry Nadeau was badly injured, I helped prepare the story we’d have to release if he died. For each of those, though, there were dozens that were great fun.

All that continued through 2013 in Richmond, and the short track racing for a few more years. Then I retired, and what happened after that will make up the next – and final – installment.

A Note About the Cover Photo – Ray Hendrick had been my first driver hero back in Richmond. When we got to Pennsylvania, I took an instant liking to Smokey Snellbaker. For years one of the greats of sprint car racing, Smokey was nearing the end of his career when we arrived and was driving super sportsman cars at Silver Spring. I had a chance to meet him a couple of times, and he seemed to be a great person, too.

(PHOTO CREDITS – The Smokey Snellbaker photo is from his car owner, Phil Long. I’m not sure about the origin of the Kramer Williamson photo, but a very similar one is by Lee Greenawalt, one of our area’s best, so this might be his, too. The Silver Spring Speedway action shot is by WendyRacingPhotos, and the aerial is from Speedway and Road Race History. The Richmond Raceway aerial from 1988 is from the Richmond Times-Dispatch. The Burton/Gordon duel is from an old Richmond Raceway blog with no further credit provited there. The photocopier photo is Commercial Copy Machines of Chesapeake, Va.)