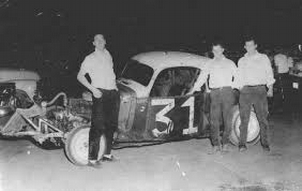 Since my buddy Dave Fulton has opened this can of worms, I guess it’s time to get the old cane pole out and do a little fishing.

Actually, some of what follows may seem to contradict elements of Mr. Fulton’s tale of the ill-fated JoFaDa racing team, so I should admit that my memory is less than three months younger than his. You should be careful in concluding with any confidence which version of our stories is right. I say believe ‘em both.

By the way, that cover photo isn’t the John and Frank and Dave who made up JoFaDa, although we might have imagined things that way back in ’66.

An introductory thought: Most young folks who get into racing have family members or friends already involved, so they’re just getting into the action they’ve already been observing. Not so with any of the three JoFaDa partners, although Dave’s Uncle Eddie was a rabid racing fan, but I remember his stories largely encouraging us AFTER we had decided this was our sport.

Also, lots of new racers come from mechanical families, and although my Dad was good at that kind of thing, I very seldom saw evidence of it first-hand.

We just somehow managed to fall in and get hooked.

That’s a long way of explaining why we decided we could have a race car even though two of the three of us would struggle changing our oil, and the third was hooked on little English sports cars.

Does that help to explain why this enterprise got off to a slow start and then went downhill?

OK, here’s where the Fulton and Buhrman accounts differ. My recollection is that we bought the Oldsmobile from an individual, and I only mention that because it leads into a story.

I think we paid the guy $75 for the car, so it seemed really nice of him to offer to deliver it to us. He towed it over, dropped it off, collected his money, and was gone.

We went out to start our soon-to-be Victory Lane Special, but nothing happened. Our “friend” had been considerate because he’d taken the battery out of the car and kept it.

We were angry, at least for a few minutes. Then we looked in the trunk to see if he’d absconded with the spare tire, too, and instead found to our surprise that he had left behind two chrome wheels, worth a bit more than the battery. He was about as thorough as he was honest. We sold the wheels.

After the car was stripped (and a less-than-professional #119 spray painted on the doors), we somehow towed it away, and – I’m pretty sure about this part but wouldn’t bet my house on it – we ended up with the car in a large warehouse-type building on an island in the middle of the James River in downtown Richmond. The building had become a communal garage for sports car enthusiasts, which is probably how we got there, since John had a pair of Austin Healy Sprites (which might have combined to constitute one half-decent car) and a Triumph TR3, and he occasionally did road rallies in one or more of them.

The car stayed in that building until something traumatic happened to the engine while John was working on it; since we wouldn’t have understood what happened had it been explained to us, we didn’t ask. Since we had no resources to replace the engine (and maybe because we were concluding that any further expenditures would be just as foolish and futile as those we’d already made), the Oldsmobubble was towed to John’s family’s land in Virginia’s Northern Neck, hauled as far out in the woods as possible, and used for target practice.

That’s my story, and I’m sticking to it.

Here’s some rationalization, though. I believe our failure was due in part to our living in the wrong parts of Richmond. Almost all the good racers lived south of the James River; we lived north of it. I only remember one other guy in Dave’s and my area who had a Southside Speedway car, and his ’57 Chevy hobby car sat in his surburban home driveway except on Friday nights, when it sat at the rear of the field in races. If he couldn’t do it – and he might even have been a legitimate mechanic – what hope did we have?

So far, this recollection has concentrated on the Oldsmobubble, but I don’t want to neglect the truck, since it was MINE!

The truck was a ’53 or ’54 Chevy stake truck, and I bought for $350 it from a guy who knew how to weld, so the deal was that he’s add a frame to the back that we could attach ramps to, so the car could make the pretty steep climb up into the truck. This our seller did, although he did set the truck bed on fire once with his torch. That set us up to attach the ramps, which we never obtained. Once the car became a bulls-eye in the woods, it didn’t seem so important.

I need to say something about that “steep climb” part. It may have seemed dumb that you almost needed an elevator to get a car from the ground into the truck bed, but it wasn’t all that unusual back in the day when economics required racers to use everything from school buses to hearses to ambulances to inappropriate trucks as their haulers. The tracks knew it too: South Boston Speedway had a dirt ramp that you could back your tall truck up to and roll the car off without using ramps that looked like an Olympic ski jump. I remember a mid-‘60s Grand National/Cup race in Richmond when Tiny Lund used such a truck and found a ditch in the parking lot that was deep enough that he could roll the rear wheels into it, lowering the truck enough to safely off-load his #55 racer.

HOWEVER, my truck did serve other purposes while I owned it. After JoFaDa had been buried, memorialized, and forgotten (well, sort-of forgotten), I still had this truck, and I was now in college (U. of Richmond), where the student radio station was my primary activity. One summer, a fellow student who lived in Baltimore built a new console for the radio station (where the disc jockey would “spin the wax”) and had no way to get it to Richmond . . . until I volunteered.

It was a memorable trip. First, I was stopped at a weigh station and ws informed that Maryland required mud flaps on trucks – I had none. I promised never to darken the state’s doors with my vehicle again, and – spotting an idiot when they saw one – they let me off.

Then we broke down in downtown Baltimore. An older police officer – who likely saw it as less dangerous work than other things he might be asked to do – stayed with me until a tow truck came. My Baltimore buddy had connections, so we got the truck fixed the next morning (it was a distributor problem). We loaded the wooden radio studio console on it and tied it down with fairly inconsequential twine, compensating for the weakness of the stuff by using so much of it that it looked like Gulliver tied down by the Lilliputians. There may have been several accidents from people getting distracted laughing at us on the way back, but I didn’t notice.

What I did notice was that the cab roof had almost rusted through in the center, and when you got up to speed, the wind would get underneath the part that was loose and cause it to flap noisily. It had no radio, so that was my music for the road.

The truck’s last duty came a couple of years later – yes, I really did own it that long – when the student radio station group decided to enter a float in the Homecoming Parade. The University of Richmond’s teams are called the Spiders, so we attached a large pole in the middle of the truck bed, created a huge ball out of chicken wire, covered it with blue crepe paper (the school colors are blue and red), and attached eight chicken wire-and-wood legs that could be flapped around from inside.

Then we found a freshman that we could stuff inside the thing, so he could flap the legs and shoot a fire extinguisher out the mouth. The whole thing also spun around.

I should note that the University of Richmond does not have an engineering program, and this project was the work of liberal arts majors. Nevertheless, by some miracle or intervention of God, the pole holding the spider and the freshman stayed attached to the truck and didn’t send both tumbling out onto the football field. When we got back to my parents’ house (where the assembly had taken place), the whole thing was intact, save for a good deal of crepe paper attrition.

My recollection is that Dave was right about my father’s involvement in selling the truck – and I got $250, which means all that fun we had only cost $100, plus the odd repair bill. (Pops also sold two of my cars, so that should have earned a spot on his resume.)

Of course, my truck’s adventures had nothing whatsoever to do with racing, but I imagine some of those other weird hauler/tow vehicles used back in the day also had stories attached, so I hope you’ll forgive my ramble outside the stated purpose of this website.

Actually, just a couple of months ago, I saw a lower-division stock car towed by a pretty classy looking limousine, so there’s still a tenuous link to our era out there. If any budding racer wants to start with a ’53 or ’54 Chevy, I’ll see if I can track mine down . . . and there’s probably an Oldsmobile out in the woods of Virginia’s Northern Neck. . . .

(Photo Credits – The cover photo – which isn’t the JoFaDa trio, is from a collection on CatamountStadium.com, and the driver was Carl Rogers. The can of worms came from a 15-year-old blog by Stig Brautaset; no idea where Stig got it. The photo of Lee Petty’s ’57 Oldsmobile came from a website called Curbside Classic, which gave no credit for it. The Chevy truck photo is from Jalopy Journal. The limo hauler photo is by the author.