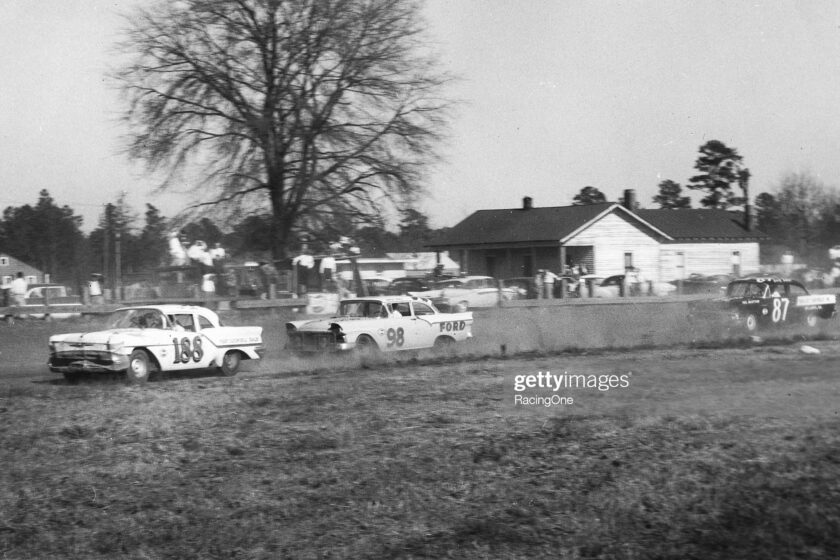 Hundreds of racers over the years have traveled back roads heading to long gone racing venues.

I had a nice back road experience a few summers ago.

My wife and I, along with our two grandsons, drove over from Charlotte to Wilson in eastern North Carolina for a couple of days to visit her remaining family in her birthplace and the birthplace of each of my grandsons’ mothers. After enduring the traffic of Interstate 85 & Interstate 40 and thinking of pleasant back road memories, I hatched a plan that I would reveal to my wife and grand kids only when it was time to depart Wilson and return to Charlotte.

So, after two days of eating all the eastern North Carolina style barbecue I could devour at the world famous Parker’s BBQ on U.S. 301 across from the fabled and now gone Wilson County Speedway, I was ready to reveal my “plan” to my wife for our return route to Charlotte.

My “plan” was to return to Charlotte on the back roads, not the interstates.

Before heading west back to Charlotte, I first drove south on I-95, a drive I hadn’t made since heading from Wilson to Darlington and Daytona in the 70s. That road was bumper to bumper on Friday morning of July 4th week, but we wouldn’t be on it long. As we passed Smithfield, home of the late actress Ava Gardner, I pointed out the old Sylvania television factory, one of the last in the United States to manufacture TV sets.

I also pointed out the former location of the huge billboard that stood beside that stretch of I-95 in the 1960s & 1970s erected by the United Klans of America. It used to picture a hooded Klansman on a reared and also hooded steed with the tag line in huge letters reading, “You Are in the Heart of Klan Kountry.” That did not interest my grandsons enough for them to put down their portable video games for a look. I am glad they didn’t live in a time when we persecuted our neighbors because of the color of their skin.

I turned off I-95 at Dunn, NC onto U.S. 421 and passed by the Dunn-Benson Ford dealership that had been run by Carlton Lamm, onetime proprietor of the Barbecue Barn Restaurant in Wilson, NC and owner of Late Model Sportsman cars that won the Southern 200 at Wilson in the 70s. “Winding Wayne” Andrews was one of Carlton Lamm’s drivers back then. Carlton today is in several Halls of Fame for Dirt Track Racing.

At Lillington, we got on 2-lane NC Highway #27 for an east/west journey through Pineview, Johnsonville, Cameron, Carthage, Biscoe, Troy, Albemarle, Red Cross, Locust and Midland before reaching the outskirts of Charlotte and continuing south on the I-485 beltway to our southeast Charlotte home in the Ballantyne area.

We encountered several scenic North Carolina county courthouse squares and circles in the county seats that we drove around along our peaceful journey. Although the temperature was 100 degrees, we had trees overhanging the road and often drove in shade. There was no traffic. It was a far cry from I-85. It was wonderful. I wish my grandsons had been more interested. We passed numerous historic markers. One commemorated a Gaelic poet and another a long gone pastor.

Several towns and courthouses were on the National Register of Historic Places. We passed one marker about a Tory gathering with General Cornwallis during the American Revolution before he marched to battle General Greene at what is today Greensboro. When I explained who the Tories were, my 7 year old grandson stated, “Grandpa, there is no such thing as Revolution. We did not come from monkeys!”  That was our best laugh of the trip.

It was so peaceful along the route. Throughout the northwestern end of Harnett County, the shoulders of the 2-lane road had been widened and covered with sand and straw on each side. A sign warned of equestrians  for the next 14 miles.

It was just an absolutely beautiful day and magnificent cross state drive, even if the boys were bored.

Then it happened. Very unexpectedly.

We had recently passed through the historic town of Carthage, county seat of Moore County, with its scenic courthouse in the middle of the road. The town is a 53 mile drive from Level Cross.

I rounded a shaded curve and on the right side of the road sat a now unused and aging tobacco barn. Kudzu creeping up the left side facing the curve partially obscured what had been painted on that abandoned tobacco barn.

However, I could still make out an artist’s beautiful tribute to two men who passed a month apart in the Spring of 2000. One was young, one was old.

Staring at me from the left side of the old tobacco barn was the face of a young Adam Petty with the number “45” below the image. To the right of Adam and also staring directly at me was the grizzled visage of Lee Petty. Beneath his portrait was the number “42.”  The paint was starting to fade, but it was all still very legible. I assumed it had been painted back in 2000 or 2001.

It was an unexpected and memorable treat to encounter this wonderful work of art.

Anyway, we continued our two lane journey to Albemarle, where the road gained two more lanes near the Honda dealership owned by the late driver, Dick Brooks in the 70s/80s.

At Midland, I made a right turn and took a two mile detour on Highway 601 so I could show Joyce Concord Motorsports Park where grandson, Tommy and I had taken in some races.

Arriving home I felt somewhat like Charles Kuralt and had thoroughly enjoyed being “On the Road,”  but even more so I had enjoyed being on “The Road Less Traveled.,”