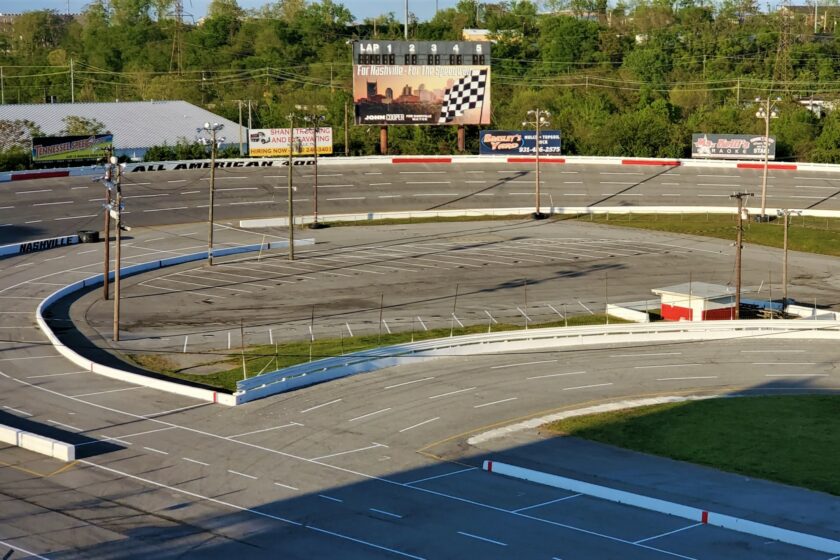 The temperature had reached 92 degrees on the sunny afternoon of September 13, 1981 at the dowdy old Richmond Fairgrounds Raceway. Thirty-two cars were lined up on pit road for the start of the Wrangler SanforSet 400 NASCAR Winston Cup Series stock car race on the ragged half-mile.  A young rookie named Mark Martin, whose boyish face resembled that of a choir boy, was parked at the head of the pack, having bested all the big name teams in qualifying for the pole position.

The former dirt track had been paved by promoter, Paul Sawyer in 1968, but it ranked as one of the ugly duckling stops on the Winston Cup tour, nothing like the magnificent three-quarter mile speed palace Sawyer would open on the same site in 1988. It mattered little to the sellout crowd of 27,000. Always a racing hotbed, the Richmond track had sold out for years. With so many military bases in close proximity, the Richmond grandstands were always filled with many service personnel and veterans.

What did matter to the crowd was that it was now race time and no engines had been cranked. Flamboyant P.A. announcer, Ray Melton tried to quell the anxiety of the overflow crowd by making commercial pitches for Virginia Beach dental clinics and Norfolk restaurants like the El Toro, located on Military Highway. Interspersed between his P.A. commercials were Ray’s colorful descriptions of the men making up the field. But you could tell Ray was also antsy for the “Command”  to be given to start engines.

Nobody knew what the holdup was and no explanation had been given to the crowd. Some began a chorus of boos. Well, two people did know the reason – promoter, Paul Sawyer and his son, Billy. But, they weren’t telling. They wouldn’t even tell NASCAR why they wanted the race held up. There was no television scheduled that day, but Barney Hall and his Motor Racing Network radio crew were on the air killing time.

I am a Richmond native, but I was at the track that day not as a fan, but in my capacity as Manager of Wrangler NASCAR Special Events. On this day, not only would Wrangler sponsor the Dale Earnhardt #3 Pontiac owned by Richard Childress, we’d also be sponsoring our very first race.

The Cluett Peabody Company was one of our suppliers at Wrangler. They owned chemical processes named Sanforizing and SanforSet that prevented fabric shrinkage and wrinkling. With no consumer end market, those good folks gave Wrangler $40,000 to sponsor the Richmond race and highlight their processes used in the manufacture of the denim used to make Wrangler Jeans.

With hundreds of guests and many things to monitor that go along with an event sponsorship, my mind was more occupied that day with the race sponsorship than the car sponsorship of Dale Earnhardt. Our guests were all in their seats, having depleted most of the supplies in a large Wrangler hospitality tent pitched behind the main grandstand. I, too, was antsy for the race to begin.

For those not familiar with the late Richmond promoter, Paul Sawyer, who passed in 2005 at age 88, let me give you a brief background. Born in Norfolk, Virginia, the crusty Sawyer had a heart of gold – he just didn’t want you to know it. From 1939 until his early retirement in 1965 to devote his full energies to race promoting, Sawyer had been employed at the Norfolk Naval Air Station heading up the unit that salvaged precious metals from wrecked and retired aircraft. He had taken time out to serve his country in the United States Army during World War II.

In the early 1950s, Sawyer teamed with another Norfolk native who became his best friend and business associate. That was when he began building modified race cars for AMA motorcycle champion, Joe Weatherly. So successful was their partnership that they started promoting races together at Princess Anne Speedway and Chinese Corner in the Tidewater, Virginia area as well as at Wilson, North Carolina and beginning in 1955, at Richmond. When Weatherly got a factory Ford ride, he convinced Sawyer to buy him out.

During a stellar promotional career, Sawyer earned a reputation as a friend of the fan and a friend of the racer. He slipped thousands of dollars to drivers with torn up race cars and no gas money home. During its 50th Anniversary Season in 1998, NASCAR recognized Sawyer in Hollywood with its NASCAR Founders Award. During his career, Sawyer was also presented with the Buddy Shuman Award and the NASCAR Award of Excellence. His beloved Richmond International Raceway was presented the Myers Brothers Award by the National Motorsports Press Association.  Sawyer has been inducted into the National Motorsports Press Association Hall of Fame, the International Motorsports Hall of Fame and the Virginia Sports Hall of Fame.

During 1981 Daytona SpeedWeeks, a deal was consummated in Daytona between Sawyer and Wrangler for the first sponsorship of one of his Richmond races – the September Winston Cup event. Between February and September I made several trips from Wrangler’s headquarters in Greensboro, North Carolina to Richmond to work out details of signs to be hung, buildings to be constructed and grandstands to be expanded.

I really got to know Paul well during these trips, making a friend for life. Little did I know that ten years later he would employ me. Once, when we had budget cuts and would be unable to attend the July 4th Daytona races, Paul sent plane tickets to my family, along with a voucher for a rental car and a note telling where our prepaid hotel room was located. Every Christmas, my daughters looked forward to receiving a UPS shipment containing “Papa Sawyer’s Ham.” It arrived every year, a fully cooked Smithfield ham from the peanut fed porkers of Smithfield, Virginia. There is not enough space here to write of all the things that wonderful man did for my family through the years.

During my 1981 trips to Richmond to attend to race sponsorship preparations, I became aware that Paul’s younger son, Billy saved all of the various racing periodicals that came weekly to the racetrack. Once a week Billy collected the publications and drove across the city to the McGuire’s Veterans Administration Medical Center, a 427 bed hospital and rehabilitation center opened in 1946. The hospital serves the men and women who have served our nation. There Billy talked racing with veterans who had sustained terrible injuries protecting our freedom and way of life. The racetrack never publicized the close relationship it had formed with the hospital and our wounded veterans. It was just the right thing to do in the eyes of the Sawyer family.

During one of these trips Paul and Billy showed me a new grandstand I had funded named the “Wrangler Grandstand.” Coming off turn 4, it was located right at the main gate to the racetrack. At the section closest to the gate, the Sawyers proudly showed me a special area designated for individuals with disabilities. Long before the Americans with Disabilities Act (ADA) tackled sports stadiums to be sure they had appropriate access, the Sawyers were looking after their race fans who were wheelchair bound or otherwise disabled.

Returning to race day – just as it seemed that the crowd on that hot 1981 Richmond afternoon might riot from their impatience, the sound of multiple sirens began to be heard over the melodic, sing-song sales pitches of announcer, Ray Melton. The sirens got closer and louder – many, many sirens.

Suddenly with lights flashing and engines revving, Henrico County police patrol cars and City of Richmond motorcycle officers led an amazing procession through the gate between the main grandstand and the new section for disabled race patrons. Crew members lined up on pit road and spectators in the stands strained to see what was happening. A line of green Army ambulances, red fire department ambulances and white volunteer rescue squad ambulances followed one behind the other, stirring the dust in front of the Richmond stands.

The booing in the stands had now stopped. As we looked on in disbelief, Paul and Billy Sawyer personally directed the ambulance traffic. A group of servicemen appeared and began to unload the precious cargo being gingerly transported by this special caravan. No one walked from one of these ambulances. No one was placed in a wheelchair. Each and every individual who had arrived in this unusual procession was instead placed on a stretcher, and accompanied by a personal nurse, was transported to a position of honor in Paul Sawyer’s new grandstand section.

A faint roar had begun to build in the stands and along pit road by this time. On cue, a prepared script was given to announcer, Ray Melton. He informed the now roaring crowd that the men and women who were being transported to a place of honor in the Raceway’s new section were all United States military veterans who had suffered the loss of all four limbs in combat preserving our freedom. They had no arms, they had no legs. They were all quadriplegic Veterans who were sometimes described as litter cases. These were the folk Billy Sawyer visited with and read to from his collected racing publications weekly at the McGuire Veterans Hospital.

Though these service personnel got their racing papers from Billy and Paul every week, many had never seen an actual race and had no reason to think they ever would. They didn’t know of Paul Sawyer’s tenacious nature and his love of the United States of America and those who served. We could no longer hear anything being said over the P.A. by Ray Melton. The deafening roar from the crowd had by now reached a thundering crescendo.

Only now did Paul Sawyer give a hand signal and the American flag behind pit road began a slow journey up its pole. There was no band and no celebrity record label performer on hand that day in 1981 to desecrate the song of our nation. Instead, Harlan Hoover of Carolina Sound inserted a cassette tape and the strains of our National Anthem sweetly and patriotically wafted throughout the battered Richmond Fairgrounds Raceway facility. It was a stirring rendition recorded by a military band. Many of us heard it in our youth before cable when television stations actually signed off the air and military planes flew over Mt. Rushmore in the background as it played.

As the Star Spangled Banner played, Paul Sawyer moved among the distinguished group of military veterans. On each head he placed one of our blue and yellow Wrangler hats. At each stop he saluted. The moment is indelibly etched in my memory. It was unforgettable. It was electric. I could never recount it in such a manner that it could possibly have the same chilling and spine tingling effect experienced by those 27,000 Richmond race fans.

Our Wrangler driver, Dale Earnhardt placed 6th that day, two laps down in the Childress Pontiac. The 1981 Wrangler SanforSet 400 ironically was won by Benny Parsons, driving for Bud Moore, himself a veteran and a hero of the Allied invasion of Europe in World War II.

It wasn’t Veterans Day, but it was a day for veterans.