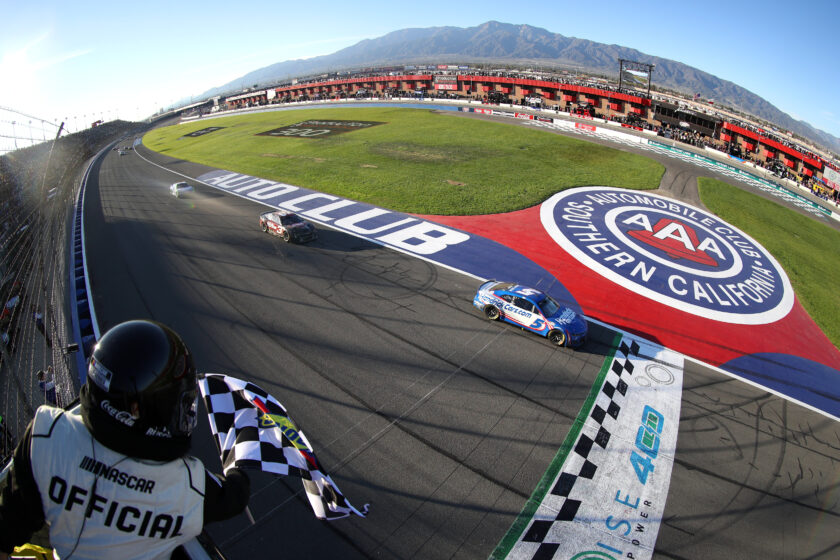 Pretty impressive stat!. It’s the talk of the sport. Now that a few days have passed and the afterglow has dimmed a bit, let’s take a closer look and see just what it and other Fontana race stats mean.

Yes there were 32 lead changes, but…

Upon closer review of the NASCAR Cumulative Report we find that of the 32 Lead Changes in the Wise Power 400, 19 of the Lead Changes came under Caution with the remaining 13 Green Flag Lead Changes.

13 Green Flag Lead Changes is a little different than 32

Of those 13 Green Flag Lead Changes, eight occurred during the influence of the Start or Restarts where the field is lined up double file and is bunched.

Historically, within three laps of a Start or Restart the field has settled into single file and for this exercise passes that take place in that window are considered Start or Restart passes to differentiate them from other Green Flag Lead Changes.

The race saw thirteen Green Flag Runs, with the longest being 19 Laps. Since no single run extended long enough there were no Green Flag Pit Stops, so we saw no Green Flag Lead Changes because the Leader relinquished the lead to pit.

This means for the race, there were five Racing Lead Changes. That is a term used in our analysis to describe Green Flag Lead Changes that resulted from one driver racing past another to take the lead after the three lap Start/Restart period (described above) and holding it to Start/Finish Line.

This is what fans think of when they hear the term “Lead Changes”-two or more cars racing for the lead and they changed positions up front. As we see the term “Lead Change” doesn’t always reflect racing action, so the term Racing Lead Change is used to better define and measure the Green Flag racing at the front.

So, for Sunday’s race, there was 32 Lead Changes registered but only 13 took place under Green and of those only 5 took place after the field got past the “bunching” afforded by Starts and Restarts.

Five is a bit different than 32…

What about all those Caution Flag Lead Changes?

The Caution Flag Lead changes were interesting. On the surface it would appear that there was all this action back and forth because of all the pitting issues with the new car. Interestingly, that wasn’t so much a factor as Pit Location. At Fontana, if the leader’s Pit Stall is located before the Start/Finish Line, the leader will give up the lead when they stop in their Pit Stall, turning the lead over to the first trailing car who passes the Line. If Pit Stops are in order and the car who led them onto Pit Road is the first one off, they will reassume the lead when they get back to the Start/Finish line.

The result is NASCAR scores two Lead Changes per caution, just because of where the leader pits.

In Sunday’s race, Tyler Reddick selected Pit Stall 26, the last Pit Stall before the Start/Finish Line. So each caution he led the field onto pit road he would pull into his Pit, give up the lead and then take it back when he was the first car back out.

During the first Caution, Reddick was the leader and when he pulled into Stall 26 he gave the lead to Erik Jones who was pitting near the end of Pit Road in Stall 6. While Jones was being serviced, Reddick would pass him back and be scored the leader when they crossed the line again.

This was repeated Caution after Caution and when Reddick wasn’t doing it, Chase Briscoe, who was pitted in Stall 27, next to Reddick would create the Caution Flag Double when he would lead the field down on Pit Stops.

Even Kyle Larson got in on the act during the 11th Caution as he was pitted in Stall 31. He led the field into Pit Road and pulled into his stall before the Start/Finish Line allowing Blaney to take the lead as he sailed past to pit in Stall 22. That Double was a little different as Briscoe stayed on the track and assumed the lead when they got back to the line, but it was the same mechanics.

Long way to say the bulk of these Caution Flag lead changes would have never occurred had the #8, 14 and 5 selected Pit Stalls beyond the Start/Finish line.

Pit Stall Selection was the difference.

Anything else about those Caution Flag Lead Changes?

A couple of other things showed up in the Caution Flag Lead Changes. Kevin Harvick stayed on the track during the 3rd Caution and took the lead after William Byron pitted. He pitted the next lap to give the lead to Reddick who had won the race off pit road.

Joey Logano registered a Lead Change on Lap 156, the last lap of the 9th Caution. To do that he had to beat Erik Jones to the Line to take the Green.

With only Five Racing Lead Changes why was the race “so good?”

Several other stats help define the action at Fontana and why so many felt this was a “good race.”

NASCAR reported that during the 141 Green Flag Laps run Sunday there was a total of 2696 Green Flag Passes. Of those, there were 1166 Quality Passes, or passes that occurred in the Top 15 positions. When you compare the percentages of Quality Passes-43.2% to the cars running in the Top 15-41.7% you see that more passing was taking place up front.

Five Incidents. Five Spins. Two Stage Breaks That resulted in 59 Caution Flag Laps which not only reduced the available Green Flag Laps but broke up the race and prevented any long, Green Flag Runs from occurring. Those, along with the Start created 13 opportunities for Lead Changes off of Starts and Restarts, which competition took advantage of eight times.

The race had 13 Green Flag Runs covering the 141 Green Flag Laps. This resulted in an average Green Flag Run of 10.8 laps. The longest run was 19 laps. With runs so short, the field stayed more bunched, cars had less chances of being lapped, more chances to recover lost laps through Lucky Dogs and Wave Arounds when they did.

Coupled with the fact that 9 of the 13 Green Flag Runs had at least one Lead Change, allowed the race to play out differently than what we have seen in the past at Fontana.

Combine all that with the new car, new drivers up front, top drivers in the rear on a track with new surface conditions. Throw in an eventful practice and qualifying plus the Clash Bump and you get the Fontana reaction.

Is it enough to continue the NEXT-GEN momentum?

Only time will tell. It’s on to Las Vegas to find out more.

But those 32 Fontana Lead Changes you keep hearing about, on the surface, they look pretty glittery till you look a little deeper.

“Cause everything that glitters is not gold.”