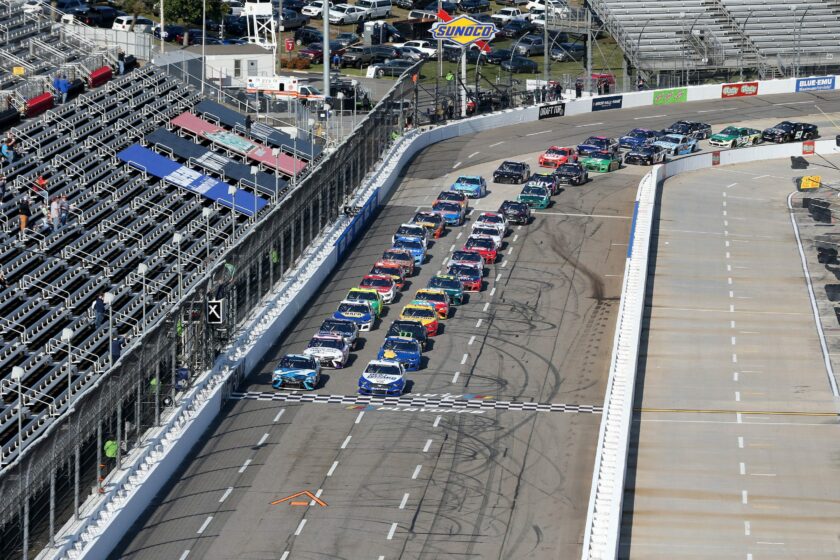 This is it! Martinsville. The decider of which three of the remaining seven Playoff Contenders will advance to compete for the Championship in Phoenix.

Kyle Larson is the only one locked in for sure when he leads the field to the green flag for Sunday’s “Xfinity 500”, having punched his ticket as the only winner in the round of eight.

The stage has been set and the various advancement scenarios have been discussed all week. They will be reviewed in detail one more time during Sunday’s pre-race, just to make sure we all understand and to further advance the mantra that the current Playoff system is the best way to crown a Champion.

So when they roll off on Sunday, everyone will be watching the Seven to see who is above the Cut Line and May advance and who is below and will see their Playoff chances end. Kyle Larson is in with his Round of Eight wins. Kyle Busch is fourth in points and currently sets the Cut Off Line. Chase Elliott and Denny Hamlin are sitting pretty with a sizable points cushion over KyBu. Ryan Blaney, Brad Keselowski and Martin Truex, Jr. are right on KyBu’s heels and can point their way in without a win provided they can climb past Busch. Joey Logano, bless his heart, he needs a win.

It’s gonna be something to watch. Rumor has it that Vegas has set the Over/Under on how many times we see the “If the race ended now” points standings graphic at 54.

I’ll take the over.

While everyone is focused on the Playoff contenders, fans need to remember their Wingmen, their non-contending teammates, affiliates and OEM partners who will play a role in their chances to advance. Their roles in determining who advances may be as exciting to watch as the seven Contenders drive to survive to Phoenix.

Now the standard line from all the team owners is there are no team orders-everyone, contenders and non’s are out there running their own race. How it shakes out is how it shakes out. A look back indicates otherwise.

And this race last year says it best.

Your remember the scenario? Denny Hamlin and Kevin Harvick were battling for the final position with a single point separating them. Hamlin’s teammate, eliminated Contender/ Wingman Kyle Busch was doing all he could do to keep Harvick behind him so Harvick could not collect the much needed point that would advance Harvick to the finals and send Hamlin home.

While Harvick was busy with Busch, Denny had his own issues. With laps winding down he was having trouble getting off the turns and was doing all he could to maintain position with competition breathing down his neck. Lame Duck Teammate/Eliminated Contender/Wingman Erik Jones had a faster car and had not only caught Hamlin but was all over his back bumper. So much so that Denny took to the radio to complain how hard his teammate/Wingman was racing him.

If that wasn’t bad enough, a little further back was Harvick’s teammate/Wingman, Cole Custer who was also coming in a hurry. If Custer could get by Hamlin, his teammate, Harvick would advance to Phoenix and contend for his second Championship.

Lurking just outside all this was Hamlin’s other Wingman, teammate Martin Truex, Jr. who, after some earlier bad luck, found himself a lap behind but was still running fast enough to help see his teammate Hamlin home.

So that’s the scenario as Martinsville was winding down. It was like the final scene of Top Gun being played out on the half-Mile paperclip with some Days of Thunder thrown in for good measure.

You remember how it played out. Everyone knew Jones was the faster car, so much so that his Crew Chief came on the radio and not only told him the situation (facts of life, so to speak) and later his spotter told him “Don’t pass him Jones” followed by “Stay with him and get what you can.”

Erik was not happy, but being the dutiful, albeit Lame Duck Wingman fell in behind his teammate to protect his 6 from the charging Custer. It’s not like this was anything new for Jones. Go back and look in past Playoff races-once eliminated from the Playoffs, if you wanted to find Erik Jones just look at the back bumper of a Playoff teammate and there you would find him, providing that points cushion between them and other contenders.

That’s just what good Wingmen, even Lame Duck Wingmen, do.

After the message was delivered, Erik let everyone know the score-that he had the car but wasn’t allowed to pass. He raced the #11 hard, showing he had what it took to pass but never did, before settling into the role of the compliant Wingman and once again providing the much needed cushion for the struggling Hamlin.

Custer was still coming. Seeing that Jones was between him and his target of passing Hamlin to eliminate him from the Playoffs he now had two JGR cars to get around he continued his charge.

But as Lee Corso would say, “Not so fast” as Wingman Truex, Jr. sprang into action. A lap down, he could have and probably should have stayed out of the fray and stayed behind Custer to let them settle it out between the lead lap cars. Instead, the lap down Joe Gibbs Racing Wingman passed Custer, putting two JGR cars between Hamlin and Custer.

Custer was still coming but now with three JGRs lined up ahead of him it wasn’t going to happen. Denny was safe and secure in the rocking chair and as the field came to the Checkered Flag, Harvick had little choice but to make a last ditch Hail Mary move to spin Busch to get the point.

It failed. It was exciting, but it still failed.

Behind the spin, Wingmen Jones and Truex, Jr. sealed Hamlin’s deal with Truex, Jr. swinging low and nearly stopping in front of Custer as Harvick was sitting sideways on the track. With the bottom lane blocked and Jones covering the top, together they escorted the #11 into the final Playoff spot.

A post-race flap ensued as the radio transmissions telling Jones not to pass hit social media. Comparison were made to the 2013 “Spring-gate” scandal.

NASCAR said they would look into it but found no wrong-doing. Hamlin was allowed to advance to the Playoffs, where he finished fourth.

As we return to Martinsville to set the final contenders for the 2021 Cup Championship, a few things have changed from 2020. Erik Jones and spotter Rick Corelli are now with Richard Petty Racing. Crew Chief Chris Gayle now finds himself out of Cup and now calling the shots on the #54 in the Xfinity Series. 11 wins with four different drivers while JGR teammates have collected zero wins this season makes ones say hmmm… about the move.

Denny Hamlin who needed help from Jones, Truex, Jr. and Kyle Busch to advance last season finds himself fairly secure this time. This year it’s his Wingmen, Kyle Busch and Martin Truex, Jr. who need help to advance. Will Denny take a chance and return the favor? Can Christopher Bell become the new Erik Jones-Wingman Extraordinaire? Will affiliate Bubba Wallace step in and help out? Considering how he and Busch have been getting along of late, that might be a stretch.

How will Erik Jones race his former teammates, especially Hamlin who not only got him called off at Martinsville last year but took a Talladega win away from him as well?

There are lots of questions for JGR going into this cutoff race.

At Hendrick Motorsports, Kyle Larson is in and Chase Elliott should be sitting pretty. He has a nice points cushion, won there last year and has three awesome teammates/Wingmen-Larson, William Byron and Alex Bowman. Those teams run fast enough there that they can provide whatever cushion may be needed and all are in a Playoff position where filling the Wingman role doesn’t adversely affect their chances. But then there is Kevin Harvick. Can they and NASCAR keep him from ending Chase’s Playoff run?

Penske has three teams still contending and all three are below the Cut Line. They all run good here, finishing P2-P4 here last year but I’m sure they could all three use some help. Logano needs to win, Ryan and Brad need to get past Busch and hope someone behind them doesn’t win. Matt DiBenedetto runs well there and with Wood Brothers being a Penske affiliate maybe he could provide some help to someone… but the question becomes, who?

Will other OEM teammates come to their aid? Harvick sure could and would probably take great joy getting a Ford in the Finale at the expense of a particular Chevrolet. Aric Almirola won at New Hampshire, which is similar to Martinsville. And we know Custer can bring it here. Ryan Newman is a tough one to pass on any track and Martinsville doesn’t make things easier.

And then you have drivers like Kurt Busch. Where does his loyalties lie-with His current OEM, Chevy or future OEM, Toyota? Both would welcome his help for sure.

Martinsville should be some kind of race. As you watch those seven who are scrapping to make it to Phoenix don’t forget to keep an eye on the Wingmen who are out there competing as well. How they race can determine who will make it to Phoenix as much as the efforts of the contenders.

And as far as team orders go, there won’t be any, just “heightened situational awareness”.

Blocking, there probably won’t be any of that either, even though Joe Gibbs would have never won a Super Bowl without his “Hawgs” leading the way.

However it plays out Sunday, it should be exciting-for Contenders and Wingmen alike! To get a feel for what you should look for, look and listen to the final twenty laps or so from last years race.

Till then, it’s Gentlemen Start your Wingmen!