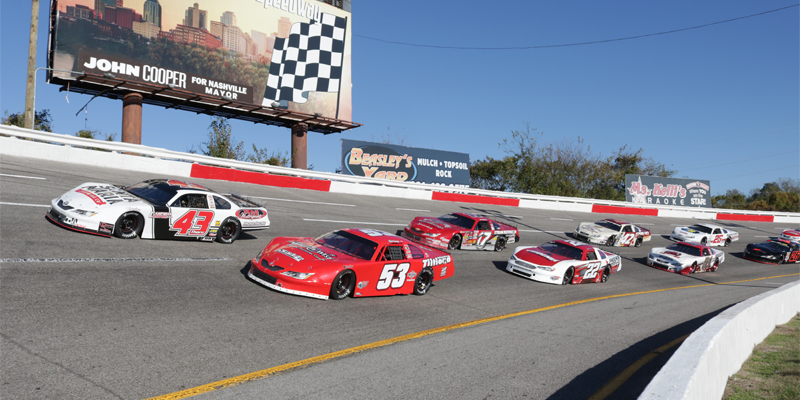 ( Editors note ); In his previous article Frank mention he had been watching some races at BAPS Motor Speedway here’s his report from his latest visit.

It doesn’t begin to tell the story.

11 minutes, 44.081 seconds does a better job. That’s how long the two veteran drivers battled tooth and nail over 20 laps, seldom if ever separated by a full second, with tension building every lap.

Officially, Dodson only lead one lap, the 17th, but starting with lap four, the Middletown racer grabbed the lead for at least part of a lap perhaps half a dozen times in his PowerMist Racing Fuels/Crockett Log Homes/Fastener Specialties #20. Each time, Duke had the necessary response.

Each time, the Selinsgrove veteran and 2019 IMCA/RaceSaver National Champion (and PASS Champ) found a path to guide the Fairfield Chevrolet/Apache Tree Service/Bud Godek Auto Body #67 back into first.

Despite the intensity, there was no contact, a fact Duke mentioned in victory lane.

“It was a blast,” he said. “It was a 20-lap race, but it only felt like it went five laps. It was really nice to race with somebody as clean and respectful as Doug is for the lead like that. We raced rally close and really hard, but I don’t think we touched at any given point during the race.

“Hopefully, we could show some people tonight how good racing the PA Sprint Series has.”

Duke said that he tried to adjust his line on the track to gain a better advantage over his challenger, but only with partial success.

“There about halfway through the race, I tried to move my line up a little bit – it seemed like I was peddling a little bit, my car was loose trying to run the bottom. When I moved up I could stay in the gas a little longer, and it felt like I could keep him at bay. And I thought I was doing good, and then with about two laps or so to go, there he goes again on the outside of me. We were really lucky to hold him off.”

While Duke and Dodson were staging their battle for the ages, the action was equally intense behind them. Will Brunson of Middleburg, who had started fourth, settled into third early and managed to hold that spot throughout the race for a career-best finish.

Behind Brunson was chaos. Rookie Logan Spahr, who finished second at BAPS last weekend, ran as high as fourth and was in the thick of the battle until slipping back in the final laps. Brothers Mike and Dom Melair of Warrington battled one another and others to hold top five spots throughout, with Mike finishing fourth and Dom fifth.

Dave Brown of Aston started eighth and quickly made his way into the top-five battle, ending up sixth, ahead of Devin Adams of Lebanon, who fought his way forward from 11th. Spahr, last week’s Port Royal winner Kenny Heffner, and Kennett Square, Pa., racer Josh Bricker completed the top 10.

The race was slowed only twice for cautions. Last week’s BAPS winner Buddy Schweibinz slowed at the outset and brought out caution on the second lap. After a couple of slow circuits under caution, he retired.

On lap 10, Austin Reed, who was fighting for a top 10 spot, hit the wall in turn three and had to be towed off. Neither restart brought Duke much relief from the relentless challenge from Dodson.

Rowdy Heffner from Red Lion, who started 24th, earned the event’s Hard Charger Award with an advance of eight spots to 16th. Bricker moved up seven spots to earn his top-10 finish.

Heats for the 27-car field were won by Duke, Brunson, and Dom Melair. Because the program was running late, the B-Main was cancelled and all cars allowed to start. Kevin Nagy and Logan Jones were unable to make the call, so 25 racers took the green flag.

The race was part of a two-day Insinger Performance/Sunoco Nationals Fueled by Miller’s Racing Parts, and a second complete PASS program was scheduled for Saturday, but a wet weather forecast caused the Saturday racing to be postponed, and the PASS part of the show will not be made up.

For the latest news and schedule information, visit www.pasprintseries.com, the PA Sprint Series Facebook page, or @pasprintseries on Twitter.