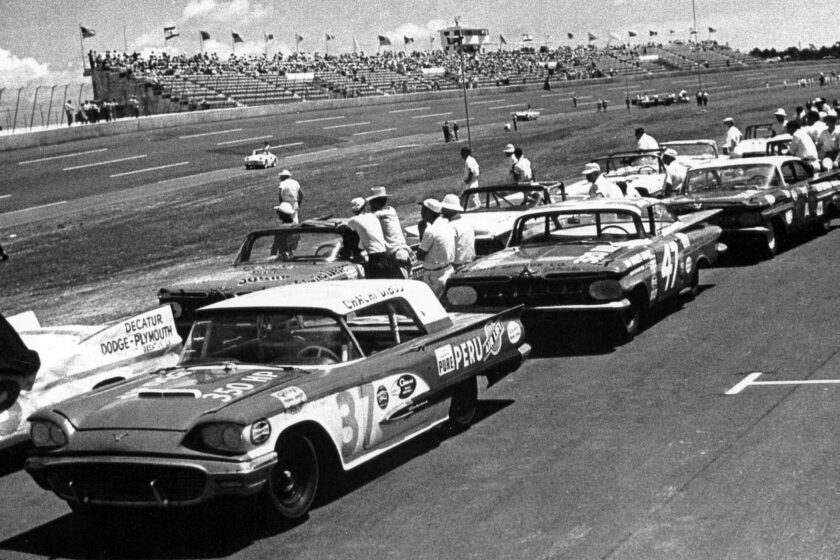 Let’s get the cheap shot out of the way first. Imagine the story that starts this way:

“The Detroit Tigers earned their playoff spot despite having a worse won/loss record than the White Sox because they were ahead after six innings more often.”

“The Cardinals are only in the Super Bowl because they qualified for the playoffs by leading more games at halftime.”

Can somebody, anybody, get through to Daytona and convince the brain trust there that stage racing was, is, and always will be a fundamentally bad idea?

I want to dwell on that word “fundamental” in this piece, because I believe that those steering the future of NASCAR (especially its three national touring series) are doing so without paying attention to some things that are fundamental. The one above is that everybody remembers who won, but not who was leading at arbitrary points in the race. Nobody remembers who was ahead after six innings in a baseball game, or after halftime (worse, after one or three quarters) in a football game.

Quick: Who lead the Masters this year after 27 holes? I say 27 because, not only is that a partial/preliminary result, but it’s an unnatural one – we remember 18, 36 or 54. NASCAR’s stage points are arbitrary “endings” that have nothing to do with the flow of a race, which makes a terrible idea even worse.

OK, enough stage-bashing, or I’ll get wound up and start ranting about charters and driver development programs, too.

When Bill France first began to focus on his Strictly Stock (later Grand National and today NASCAR Cup) division, his pitch to the fans was simple:

Come out to the track and see how fast that car you drive can really go!

That’s what differentiated the class from the modifieds (then typically just called stock cars but with lots of modifications allowed for speed), roadsters/hot rods (stripped down and souped up stocks), “big cars” (Indy-style, built-for racing machines), and midgets (smaller look-alikes of Indy-style cars). Unlike the modifieds, you couldn’t do much with the strictly stocks and still be legal.

For whatever reason, that worked, and over time the Grand National Division (and its Short Track and Convertible spin-offs) became NASCAR’s headliners. I also will admit that I can’s say how much the gradual “non-stock-ing” of these vehicles was accepted by fans (as opposed to opposed, ignored or just not noticed), but I do know that when the “Car of Tomorrow” showed up, and the divorce from stock cars was final, fans said, “That’s enough!” During the 2008-2012 period that chassis was used, the sport’s popularity went into the tailspin from which it has never really recovered.

Now we have the Next Gen car, which looks quite a bit more like what you and I drive but remains a wolf in sheep’s clothing, the wolf being a purpose-built race car, and the sheep something that sort-of looks like a Chevy, Ford or Toyota but has next-to-no relationship to the cars we drive.

That’s a different sport, and maybe one of the problems is that NASCAR hasn’t figured out a pitch that’s as compelling today as Big Bill’s see-how-fast-your-car-can-go was back then. (Big Bill also didn’t go with different aero packages for different tracks, but that’s yet another story of how far we’ve strayed.)

To me, the “stock car” issue is a fundamental that’s not being adequately addressed.

Here’s a corollary. In the early days, nearly everybody was driving a car that they could see somebody race.

GM, Ford and Chrysler were the “Big Three” manufacturers, and all were active. Chevy wasn’t a player until it produced a V8 engine in 1955, but Olds and Pontiac were popular racers, with Buicks and even Cadillacs showing up. Ford had the engine everybody wanted, so it was big, but people also liked Mercurys, and even some Lincolns showed up. Chrysler, a solid #3 in those days, had Chryslers and Dodges regularly in competition, with Plymouths eventually growing from an occasional to a regular presence.

The rest of the automobile manufacturers controlled only 9% of the market back then (GM had 46, Ford 26, and Chrysler 18, if you do a composite for the entire decade of the 1950s), but most of the others were also active, with Hudson, Studebaker and even Nash putting factory dollars into the sport.

Today, all GM brands combined control about 17% of the market, with Ford holding 14, and Chrysler 13 (mostly Jeeps and RAM trucks), so the overall Big Three share has dropped from 91% to 44. Toyota has 14%, Honda and Nissan 9 each, Hyundai 7, and everybody else a combined 17.

Another way of looking at it: In the ‘50s, nearly everybody (90%+) could see a car like theirs on the track; today, that number is closer to one-third (Chevy, Ford and Toyota), which means the vast majority of Americans are driving cars/trucks that don’t compete in NASCAR.

Actually, most of them are driving SUVs. I can’t help but that that’s a problem, too.

A Final, Unrelated Note – As regular readers know, I am a fan of sprint car racing (where, among other things, the Saturday night sprint racer can enter his/her car against the World of Outlaws or All Star Circuit of Champions when they come to town). No charters.

Recently, former All Star champion and Outlaws rookie Aaron Reutzal was found to have attempted to pass off a car with significant roll-cage shortcomings as legal by taking an inspection sticker from another car and applying it to the problem chassis. For this he was fined (money and points) and suspended from Outlaws competition for 30 days. The team also was fined money and points.

There’s more to the story, of course, but I mention this to contrast it with NASCAR’s hesitation to use suspensions as penalties, preferring instead hefty fines (which may or may not cause any actual hardship to the driver or team) and crew/car chief suspensions.

I also mention it because I think the Outlaws got it right.

I like Reutzal, but regardless of the whys and wherefores, he made a stupid mistake. Still, he’s not an evil person, and I hope he recovers.

In this case, though, the punishment was really harsh – he ended up splitting with his Outlaws car owner and now drivers with the All Stars (clearly the “one-step-down” series) in a car that doesn’t appear to be nearly as strong as he had when he won the championship.

It was also fitting. I was working at Richmond Raceway in 1994 when Jeff Burton was disqualified for a bizarre safety violation when holes were found to have drilled in his rollcage. That didn’t keep him from winning Rookie of the Year, but it did significantly damage his finish in points.

NASCAR’s big problem is that its rules so micro-manage cars that you can’t disqualify somebody for a “rounding error” violation, but the penalties now being levied seem to have no effect.

Maybe we need something in between. In the PA Sprint Series, where I volunteer, we start drivers in the rear of their heat races (which really hurts in a large field when at times only half the cars in a heat will qualify for the feature) or at the back of the cars that redraw for feature starting spots (usually, that means starting 12th. Remember, these are for 20- or 25-lap races, where starting position can mean everything. These penalties have teeth.

NASCAR’s task is to rethink rules so they make sense to fans and keep drivers reasonably honest, then to make penalties for violations hurt enough to actually discourage cheating. If I thought that was really likely, I probably wouldn’t be writing this.

(Photo Credits – Cover photo is of the starting field for the Daytona Firecracker 250 in 1959, when stock cars were STOCK cars. It's from the Jacksonville Times-Union and is credited to either the paper's archives or the former International Speedway Corp., now NASCAR. The Kevin Harvick photo was taken by Paul Abell for the Associated Press at Atlanta in 2018. Pepper Cunningham and other drivers on the Daytona beach came from NASCAR Legends on Twitter. The Nissan photo is from DailySportsCar.com and is credited to Pierre-Laurent Ribault or Nissan. The car crusher photo is from BonniesCarCrushers.com, “Southern Colorado’s scrap metal masters.” Based on the photo, I’m inclined to recommend them.