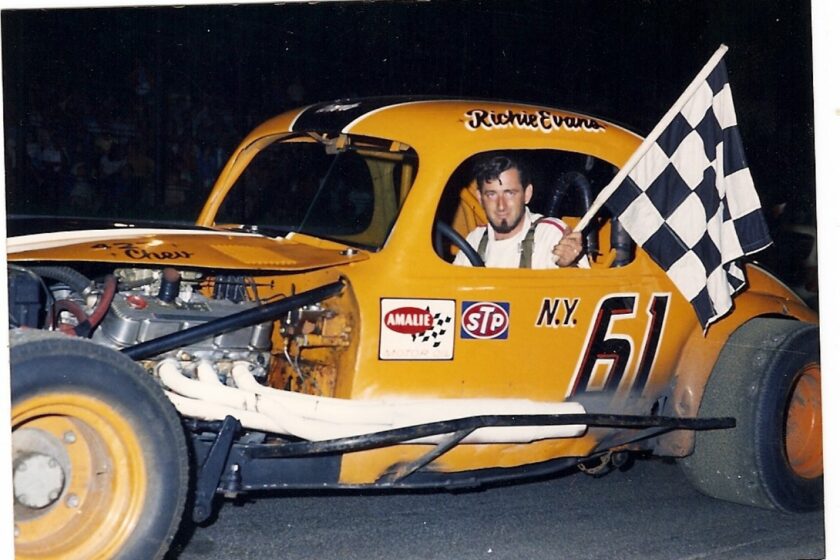 Back in the stone age, when I was a teenager, there was (and still is, though it’s paved now) a half-mile dirt track located some 30 miles east of Rochester NY, where I grew up. It’s called Spencer Speedway, and many of you will remember folks such as Richie Evans, Geoff Bodine and Jimmy Spencer racing there, but they all came later. (Been told that it wasn’t exactly “dirt” even to begin with, but some combination of tar, gravel and dirt. Sure did get dusty when the cars were on it!)

At about age 15 or 16, I was “dragged” out there by an old boyfriend that was fascinated by drag racing. In those days, the dragsters were burning something that passed for high-powered fuel but reeked of ether, and it just made me sick. Anyone near my age that had a tonsillectomy back then knows exactly what I mean.

Ah, but one weekend night we stayed on after the stinky cars were through because there were scheduled to be a couple of feature races for something called “stockcars”, and the rest, as they say, is history.

Bear in mind that we are talking early to mid-fifties here, but the cars were of a much older vintage, having a born-on date in the area of 1938 to 1941, pre-World War II. They strongly resembled the little “Legend” cars that we see today except that they were full-sized.

I couldn’t tell you the name of a driver I saw there that night, but I knew I’d found something special; something that really piqued my interest and made me ecstatically happy to be a part of it. Time and again, I went back to that little dirt track (Without that particular boyfriend) to watch the likes of Dutch Hoag, Elmer Musclow and Lee Bliss turn circles while flinging rooster-tails of dust and dirt all over the crowd. The crowd loved it, and I did too! It was all about speed, and those men were our heroes, whizzing around that little bull ring, sliding sideways through the turns and daring to risk their lives to put on the best show on earth for the race fans, a stock car race!

In 1955, the Big Guns from the Grand National circuit came to town to race at the Monroe County Fairgrounds out on West Henrietta Road and my darling Aunt Isabelle, who indulged the every whim of that scrawny teenager she loved, got tickets for herself, my poor unsuspecting grandmother and me to go and see a Grand National race. Life doesn’t get any better when you’re not yet seventeen!

The race was won handily by Tim Flock, who wound up alone on the lead lap, but there were a few other interesting names among those that I saw that day; names such as Lee Petty, Buck Baker, Fonty Flock and a guy named Junior Johnson, just to name a few.

I have to admit that being as young and ignorant as most teenagers, I really didn’t understand back then why some of the local heroes, especially Dutch Hoag, who was the best that Spencer Speedway and the Northeast had to offer at the time, didn’t fare well against those interlopers, but I would learn over the years what it means to race the best and try to beat the best.

It was some 30 years or so before I was able to see another live Grand National race, but for all that time, I followed the series closely (buying copies of the Monday edition of the Charlotte Observer from a local News Service) and looking forward to weekly copies of GNS… Grand National Scene. It was the best I could do while living in Western New York State. I cheered lustily when ESPN decided to take a chance and begin televising the races. Looking back today, I’m not at all sure that was a good thing. Sometimes, less really is more.

Now, Spencer Speedway, Oswego, up around the Lake, Nazareth, down in Pennsylvania and the like are not in a league with Indianapolis, Daytona or that big ugly track in Alabama. (Hold your fire! I used to like Talladega, until the restrictor plates came upon the scene. Now, it just flat scares me!) Neither, I guess, are the small Southern tracks like North Wilkesboro Speedway, Hickory Motor Speedway, Myrtle Beach Speedway, Columbia Speedway or Bowman Gray Stadium and many more, all of which have been removed from the Grand National [Cup] schedule over the years.

Still, the small local tracks provide some of the best racing to be had, and they are the venues that give us the best of the racers we see on the TV screen every Sunday. Over recent years, I’ve had many readers and race fans tell me stories of disillusionment and disappointment regarding the current state of NASCAR racing at its highest level. The reasons for that are many and varied, ranging from a seemingly endless parade of boring races to the impact on the wallet of being bled by not only the tracks but by every hotel, motel, restaurant and gas station within their local hospitality industry.

Then of course, there is the television coverage, or lack of same, that so many of us are subjected to on a weekly basis. Whatever the individual reason, many fans have canceled long-held reserved seating at almost any track you can think of and are planning vacations in the mountains or at the beach instead of at the track.

What will happen in the end to the “Big League” remains to be seen, but there is something quite simple that we as race fans can do. My advice is to take your kids out to the local short track; whether it’s dirt or asphalt makes no difference. Whether they run stockers, modifieds, DIRT, Sprints or Midgets is immaterial. Show the kids where real racing comes from, lest they be fooled by the bread and circuses that now pass for the upper echelon of racing on television. You won’t see Dale Earnhardt Jr. or Michael Waltrip in the infield, and you’re not likely to run into Rutledge Wood, but you just might see the guy that lives down the road a piece, out on the track and racing hard.

What you will see for sure are drivers that still race for the win rather than looking at some “big picture.” You’ll see older drivers still racing, with no one suggesting that they might like to sign into a nursing home, and you’ll see youngsters that still have to prove their worth before even being considered for a top ride. If any of that sounds familiar, it might be because that’s what Grand National racing used to be all about, before the big dollars took it over.

It’s funny; I don’t mind being old, because I enjoy having two beautiful granddaughters and watching them as they approach adulthood. I couldn’t do that when I was young because grandkids are our own children’s way of paying us back for all we did for them. First, we have to earn them. (I do, however, tell my daughter that if I had known that being a Grandma was this much fun, I’d have done that first.)

But I do miss the little dirt bullrings of my youth, right down to the need to shower twice to get all of the dust and dirt out of places I didn’t know I had. Racing should be fun, and it should be about the race and who wins! If I want a show, I’ll order one up “On Demand.” Please, would someone explain that to NASCAR?

Be well gentle readers, and remember to keep smiling. It looks so good on you!

(Editor’s note: This story is publish with the permission from the author! It was originally published on RaceFansForever; )