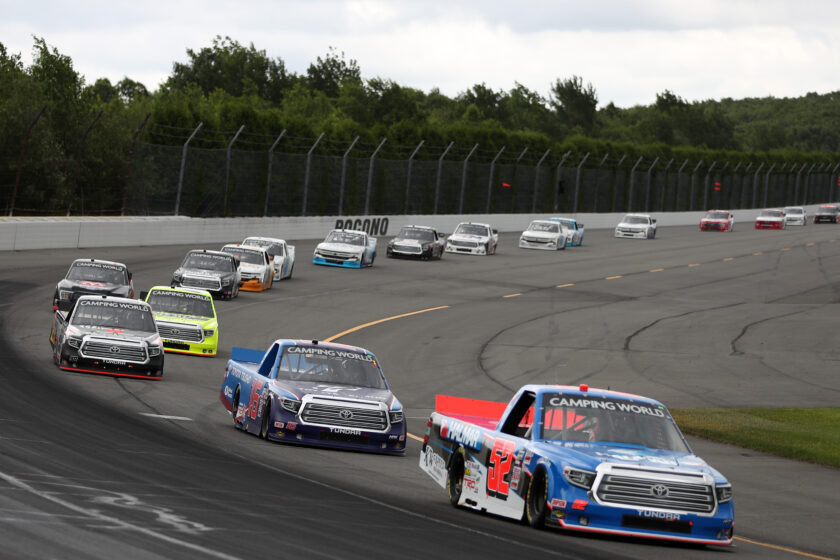 For some reason I’ve always liked the racing at Pocono Raceway. To have 4 races on two day is great, maybe just a little bit to much to take in. I would have loved watch the ARCA-race also. But the ARCA-races aren’t aired in Sweden, and I didn’t have time to look for a live stream. This weekend gave us some good racing all over the series, maybe the best it have been this year. Sometimes living in Sweden have its advantages a 6:pm local starting time for the races instead of mid-day works just fine for me.

Saturday evening started with the Trucks. For some strange reason the truck-race was 50 miles shorter than the ARCA-race, ought to be the other way around. Todd Gilliland and Zane Smith was starting on the front row and the battle for the lead was on once they got going. To start the race Johnny Sauter, Jack Wood and Chandler Smith was involved in an accident coming to the line. The incident left Wood out of the race and Sauter and Smith with damaged trucks.

From there on out the race was free from cautions for incidents up until Stewart Friesen fund trubbel in turn one with just under ten laps to go. The Caution and the way lane choices fell set thing up for an exciting finish. On the restart John Hunter Nemechek has able to pass his boss Kyle Busch to take the win. Sheldon Creed took third, Tyler Ankrum and Austin Hill rounded out top five.

Not going to say much about the Xfinity race at Pocono. We sew great racing and team able to play different strategies. However on lap 25 Justin Haley took a very hard hit when he was involved in a crash. The hard impact not only knocked the wind out off Haley but it also kept him out of the Cup-race as well. By the end of the race, Austin Cindric held of a hard charging Ty Gibbs for the win. Justin Allgaier took third place behind Cindric and Gibbs. Due to Justin Haley recovering from the accident, Allgaier found himself running the Cup-race, later on.

What to take away from the two cup-races? The HMS-cars are still fast and it not over until the checkred flag flys, the black and white flag that is! The guys in the NBCSN-booth was talking records and winning streaks while Kyle Larsons car blew a tire and hit the wall in turn 3. That gave us the first of the weekends surprise Cup-winners. Alex Bowman seamed to me more or less chocked by the fact he won the the race.

Next day new surprise when by the end of the race no caution fell near the end of the race, and that Kyle Busch hade enough fuel to take him to the finish-line. Busch hade a good handling car but with the transmission in his car was stuck in fourth gear. However this time Busch hade the luck on his side and was saved by the long green-flag run to the checkred flag. For complet results of the races please check out Racing References.

The new SRX-series raced at Eldora and Tony Stewart took home the win at his track. Second dirt-track win in a row for Stewart. Even if the SRX-series isn’t broadcasted here in Sweden, I was lucky enough to be able to find the races on Youtube in a day or so. IMHO the SRX series has been great to follow. I really like what they done so far with the concept of the series. And I think it only can get even better next year around. I’ll be looking forward to the next race at Lucas Oil Raceway.