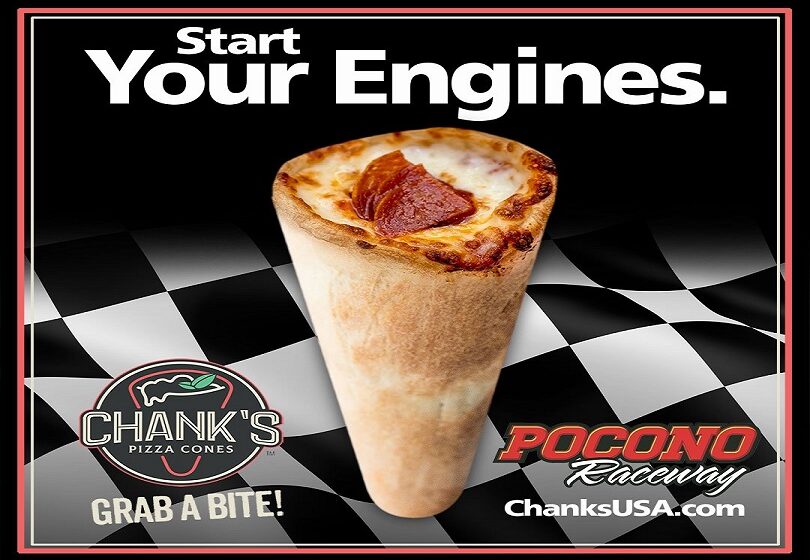 I bid you welcome gentle readers, and extend an offer to our assigned reader of all things NASCAR to take the day off or at least take extra time for lunch. This will be a fun and nonsense column, not requiring your attention, though you are more than welcome to read and smile with the rest of us.

Something about the upcoming race in Phoenix caught my eye this morning and just demanded that I toy with the subject… that subject being food at a race track… or “Track snacks” if you will. For years, Don and I had reserved seats in the Terrace Club at Pocono Raceway, because it was the closest track to where we lived, though still a 6-hour drive. For Sunday’s race, that meant we were ensconced in private seats at the very top of the grandstand, under the striped awnings. Up there, the food was free and perpetual, from coffee and doughnuts to a luncheon buffet that was always kept full, and the bar was “open.”

We were always there for the full weekend, Friday, Saturday and Sunday. We’d stay over Sunday night and drive home leisurely on Monday morning in daylight. That was the way we did every race we ever attended, unlike today when folks might show up when the Anthem is being sung, grab any seat that’s available and cheap, only to leave before the race ends to avoid the traffic jam. That bunch definitely doesn’t “get it!”

Ah, but let me take you back to Pocono, where we started. That track, owned by the wonderful duo of doctors, Joe “Doc” and Rose Mattioli (May they rest in peace), served more food and of a greater variety than any other we ever attended. Everyone had hots and burgers; most had barbeque and French fries were ubiquitous. Pocono had a row of food booths on the grandstand side that would put to shame the biggest carnival you can name. Booth after booth, each with something different to tempt your palate, and If you didn’t find it there, you could go through the tunnel to the infield where another array of different delights awaited

You could get any vegetable imaginable deep fried to perfection, with every bit of “good-for-you” nullified by a covering of seasoned bread, salt and pork fat. Who here has been to another track where you can buy pierogies? That’s a little Polish delight that is pasta stuffed with potatoes, sometimes flavored with cheese or onions, and deep-fried to golden brown… heaven with gravy!

They offered a gastronomical world tour, from Italian pasta to Greek Gyros (pronounced year’o) and Mexican tacos on the side. Beverages? Oh, they had them! You could drink the usual… Bud or Coke and things of that ilk, even cool, clear water, but the one this lady always headed straight for upon arrival was the strawberry-banana slushy! I’ve make slushies at home many times, but there was just something so special about finding that at a race track. Maybe… it was because they left out the rum… do you think?

These days, I guess Pocono might not stand alone in the massive display of carbs and calories, and for certain we have a contender in the little flat mile in the desert known as Phoenix International Raceway. Last year they announced the birth of something called the “NASCAR CARBuretor Crunch.” Unless you’ve read about it, you could guess from now until they reopen North Wilkesboro and not come up with the recipe for this little appetite appeaser. A collaboration between PIR and Americrown (Americrown Service Corp… the Food Folks of NASCAR), the item was a deep-fried peanut butter and jelly sandwich encrusted with Cap’n Crunch, covered with bacon crumbles, fresh sliced bananas and caramel drizzle.

The best description I can come up with is breakfast for four, and it was only $7, which by race track standards isn’t all that much. Oh, by the way, the calorie count for that breakfast/lunch/dinner combo was a mere 900. One PBJ Sandwich!

This year, Americrown Chef Carl Van Wagner decided he could do better than he did last year, and has come up with something he calls the “Two-wide Spicy Tempura Burger” and the “Fuzzy’s Desert Mule.” OMG! Just when the American Society of Cardiac Surgeons thought they could relax a bit!

The entrée, the Two-wide Spicy Tempura Burger is a tempura battered all Natural grass fed-beef patty topped with ham, charred peppers, Yancy’s Fancy jalapeno cayenne cheddar cheese and pineapple ketchup on a whole wheat bun. Don’t you just love the attempt at getting a “health food” recommendation for putting all of that on a whole wheat bun?

And then of course, we have the perfect beverage to top off that handful of meat, veggies and heartburn, “Fuzzy’s Desert Mule.” PIR partnered with new track sponsor, the award-winning “Fuzzy’s Ultra-Premium Vodka,” and Chaco Flaco Unusually Delicious Drink Mixers to create the Fuzzy’s Desert Mule. PIR’s spin on the classic mixology includes Fuzzy’s Premium Vodka, Chaco Flaco Berry Mojito Mix, Ginger Beer and ice. Prices for these culinary delights are $10 for the Two-Wide burger and $9 for the Desert Mule, which you’re going to need after the second bite of that chili-laden burger.

“With food and drinks being such an important part of the race day fan experience, we asked our chefs to create a one-of-a-kind delights that fans can’t get anywhere else,” said Kristie Maggs, Senior Director of Consumer Marketing & Partnership Activation. “Just like NASCAR, these creations are a new twist on classic Americana with a little extra horsepower.”

Pocono, move over! There’s a new player in race track epicurean adventure, and its name is Phoenix.

It’s time now for our Classic Country Closeout, and I know the perfect place to start! This is Bobby Bare doing a tender little love song called, “Greasy Grit Gravy.” C’mon, smile! You know you want to laugh out loud!

Next we’ll hear from a guy that never got enough to eat as a child. This is Little Jimmy Dickens singing “Take a Cold Tater and Wait.

Now how about a couple of real Southern specials… both the singer and the song? This is Red Foley, singing about “Hominy Grits.” Enjoy!

If we’re doing food, we need to include our veggies, and how better to do that than to listen to Buddy Baker singing the praises of “Butter Beans.”

Oh heck, we can’t have all that food and no dessert, so here is Bing Crosby dishing up a great big helping of “Shoo Fly Pie and Apple Pan Dowdy.”

Be well gentle readers, and remember to keep smiling. It looks so good on you!

(Editor’s note: This story is publish with the permission from the author! It was originally published on RaceFansForever;