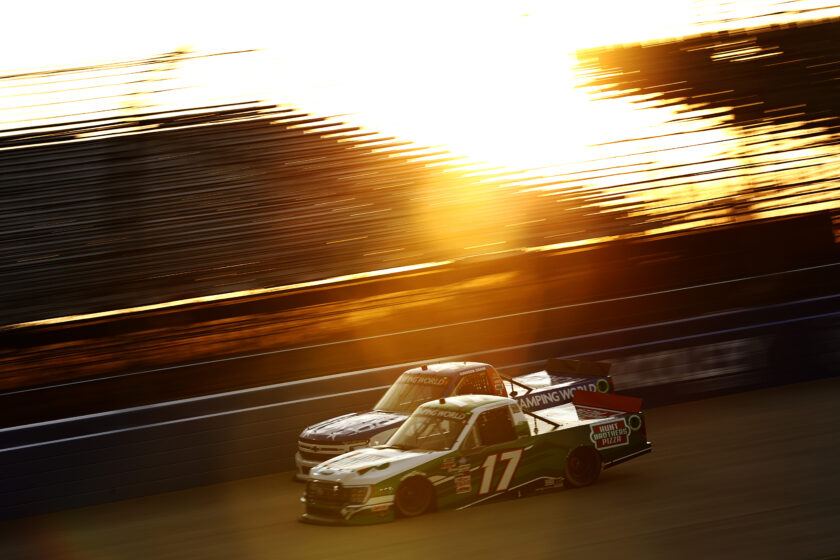 Another new track again last weekend, Nashville Superspeedway. Maybe I should say a return as some of the NASCAR series raced there ten years ago. IndyCar and Indy Lights where racing at Iconic Road America track near Elkhart Lake. The new SRX series hit the dirt at Knoxville Raceway. A track we will see the Truck Series racing on next month.

NASCAR held practice and qualifying for all three series this weekend. So go fast or go home, one might say. But things are not always that easy, when there’s NASCAR Provisionals and Owner Points involved. To this weekends Xfinity and Truck races, there was 42 entries for 36 spots on the grid. This means you need to be within the thirty-one fastest un-less you weren’t high enough in owners point to get one of the Provisionals.

I really don’t know what to say about the racing on the return of NASCAR to Nashville Superspeedway. The best I can come up with is the racing was a bit different. I mean the track is different than any other track, so why shouldn’t the racing be? My hopes are that it’ll be better next time when the teams have figured out a bit more on what’s needed to run fast there.

Well in the Truck-race Derek Kraus took the lead at the start of the race and won the first stage. At the start the second stage Austin Hill hade the lead, but Hill soon got passed by Chandler Smith. Smith held on to the lead and won the second stage. William Byron was back in Trucks this week, maybe to get a feel for the track befor the Cup race. However on lap 78 the engine in his truck expired and put down fluids on the track. So this caution set up a little mix on strategies towards the end of the race.

At the end Grant Enfinger and Ryan Preece battelled for the win with Todd Gilliland coming up from behind. Ryan Preece won the race, while Gilliland was able to pass Grant Enfinger to take second with Enfinger in third. Ty Majeski has only made two starts this year with top ten in both, so Majeski gets this weeks shout out.

Kyle Busch and Austin Cindric started on the front-row in the Xfinity race. Cindric took the lead to win the first stage. At the start of second stage, Kyle Busch seemed to have gotten the car more to his liking and took the lead. Busch led 6 times and 122 laps to take His one hundred victory in the Xfinity series. Justin Allgaier and a few other drivers where able to lead laps but in the end Kyle Busch would take the lead back Justin Allgaier finished runner-up for the second consecutive week behind Kyle Busch. Harrison Burton finished third, with Josh Berry (last race with JR Motorsports) and AJ Allmendinger rounding out the top five.

A few notes about the Cup-race; Kyle Larson continuing to kick butt in Cup this time he led 264 of the 300 laps to win his third points-race in a row. Aric Almirola won the pole and finally got a top five after a miserable season so far. Ross Chastain came in second the best finish of his 96 Cup-starts. JJ Yeley had two pit-road speeding penalties at Nashville. Yeley now leads “Fastest Man On Pit-road League” with five penalties, this year. Oh and Chase Elliott got disqualified for FIVE loose lug-nuts!

IndyCar and Indy Lights took to one of my favorite tracks, Road America. Josef Newgarden started on pole in the race with Colton Herta on the outside. Newgarden took the lead and held on up until different pitstop strategies started to mix up the running order. Kevin Magnussen had been called in to sub for Felix Rosenqvist who was still recovering after his hard crash in Detroit. Magnussen led a few laps in his first IndyCar start ever, but was forced to retire early when the engine lost power.

By the end of the race Josef Newgarden had the lead on the restart after Ed Jones had spun in turn 12. However a problem with the ICU-unit in Newgardens car and left him limping around the track for last laps of the race. Alex Palou took the win with Colton Herta second and Will Power in third, Scott Dixon and Romain Grosjean rounded out top five. Marcus Ericsson had started from eighteenth place on the grid, drove up to grab a sixth place finish, good rebound.

Linus Lundqvist took the fourth place in the first race and a fifth in the second race of the weekend. Kyle Kirkwood won the first race and David Malukas the second race. At the halfway point David Malukas is on top of the standings with Linus Lundqvist and Kyle Kirkwood just eight points behind. So this is going to be exciting to see who’s going to take home the title.

The New SRX series race on the dirt at Knoxville was quite good, This new series is going to be fun to follow over the next weeks. Great to see Tony Stewart win the race and Hailie Deegan in second Ernie Francis, Jr. third. Eldora is up next time around. Going to bee fun to see What Tony Stewart can do on his own track. And In a couple of weeks Hailie Deegan returns to Knoxville for the Truck series race there.