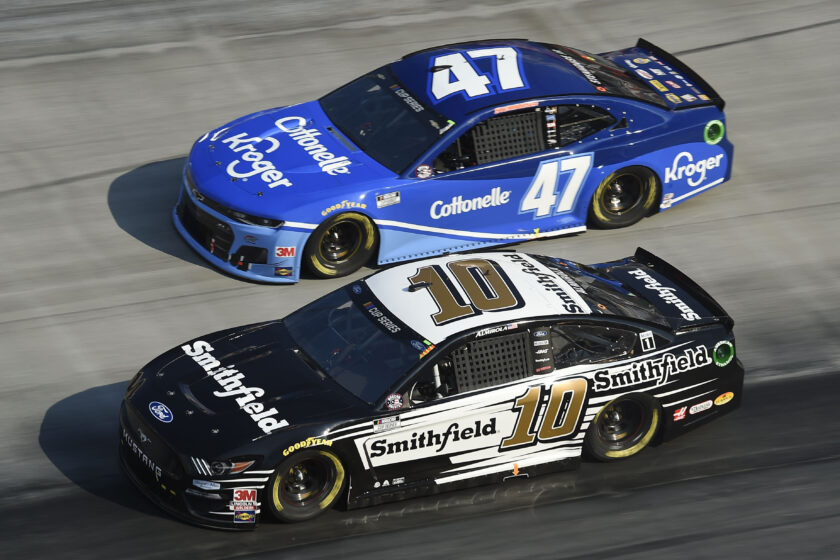 The idea was for NASCAR to identify three acceptable areas of placement and allow the owners and sponsors to place the numbers in the one that gave them the most value.

When I wrote the piece I looked at it from what I thought was a broad perspective and the impact it would have on fans, owners, sponsors and broadcasters. If everyone else was happy, what difference would it make? Sounds pretty good, doesn’t it?

Turns out, I didn’t consider broad enough. Seems that spotters feel pretty strongly that inconsistent placement of numbers doesn’t make their difficult jobs any easier. I think “Stupid” was the exact term used by one.

If only he could open up and tell us exactly how he feels on the subject, but I think I can read between the lines and get his gist.

The article garnered the following email response from a reader from parts unknown. It provided a much-appreciated perspective that I had never taken into consideration and reads as follows –

“Another eye opening article David, thanks, the readers like your insight. I wonder if there was any considerations given to this.  The Dave Moody reference to him using the numbers to identify the cars seems a little convenient when I suspect he is using more of appearance of the car in his memory. Being a former scorer and discussing with others this occurs more often than the actual reading of the numbers.

What would concern me more is the increase dangers in the deployment of safety equipment. Officials in Race Control both Operationally and in the Fire and Safety, dispatch these pieces of response equipment based upon quick identification of the car in need and the ability to communicate accurately the on-coming traffic.

We all think that under a caution the race cars have slowed, and they have to some degree. Reality is there is some reduction in their speed, but not to the point that a Fire Truck or Restoration Truck can out run or out maneuver a race car. So you’re asking a Fire Truck to identify, travel, locate and response to an Emergency, in a vehicle that has a top speed of approximately 70 MPH loaded with people and equipment.

Consider this is also more challenging under the lights as the interior lighting systems reduce the vision as well. The Driver of one of these response units need to quickly be able to identify the on-coming traffic with large, centered numbers and not waste time of trying locate the number on the car, then response. NextGen has a more pronounced fender flares than these flat sided current cars and this single modification could slow the identification process.  In a bat of the eye the opportunity to safely respond is gone.

Making a single mistake in communication or identification has a serious consequence.  All to make a sponsorship more valuable. Over the years there have been serious accidents involving these brave men and women manning the Emergency Equipment. We all watched as a jet truck was hit in Daytona on the fourth or fifth lap of a caution period.

I am not a NY Yankees fan, wonder if Major League Baseball would mandate the removal of the pinstripes on the uniforms. What an uproar we would hear and rightfully so. In sport, part of the joy that comes with sport is traditions in uniforms. Better yet, let’s dig up Fenway Park and put a dome in. Over the years, each winter we are reminded of a wreck of two of the most iconic cars in stock car racing, Two Hall of Famer’s in the 21of David Pearson & The Wood Brothers Ford and 43-Richard Petty in the STP Dodge from Petty Enterprises. True fans remember and new fans both recognize those two cars in that unbelievable finish for the history of the sport.

Some things need to be left alone!”

The reader pointed to a vital yet often forgotten group who depends almost solely on the car numbers to do their job efficiently and safely – and that’s the Emergency Response Teams. Everyone else has a variety of means to identify vehicles from roof numbers, paint schemes, transponders and such to do their jobs or to enjoy their sport. However, those men and women at track level, often at night, in vehicles with limited visibility have only the car number to make the positive identification necessary.

Were their needs taken into consideration? Sadly, I for one didn’t. If I had, I would have never written the piece to begin with as I would never knowingly suggest anything to put them more in harm’s way or hinder them from doing their critical jobs.

More importantly, have the unintended consequences that may result from these changes been factored in to what has so far been explained as a dollar and cents decision? Has the Sanctioning Body done that yet?

If so, I’ve not heard it. How about you?

Let’s face it, Car Numbers placement can look good in any of the three locations in a static environment-on a sheet of paper, a Zoom meeting screen, a proposed T-Shirt or the latest die-cast. Even on a pace lap or a TV close-up panning along there may not be a problem. However, as described by our reader, it all changes in a spotter’s or the emergency response team’s dynamic worlds.

Aren’t they worth consideration in this?

Heck, even with today’s door numbers, current paint schemes and number fonts make it a tough job. I like the Trackhouse Racing’s scheme for the upcoming race in Nashville-

However, with the paint scheme and number style and font when you imagine it at even caution flag speed through the lens of an emergency response team, is that a 99, 89, 89 or 88? Now shift that around to the other two proposed locations and see what that does for you? How much simpler does that make correct identification?

And before you say I’m exaggerating and it doesn’t really matter, keep in mind it was just a few weeks ago that the entirety of NASCAR missed a truck, not a number, but a truck nearly stopped in the racing groove resulting in two destroyed vehicles. Imagine what it could have been.

But if a truck can be missed, how much easier can a number be misread?

On this topic, does anyone know why the numbers have been on the doors to begin with? Back in the early days, numbers were all over the cars. Doors were filled with sponsorship as numbers were almost secondary. Google Hudson Hornet and see. Some were also three digits or digits and numbers, but that’s a different discussion. But the search will show you what we had before there were door numbers.

Eventually they were moved to the doors where they have remained until the 2020 All Star Race at Bristol. Was the move to place them on the car doors for scoring? Consistency and uniformity in appearance? Elevating the sport to a “professional” level? Easy identification for everyone? “Branding” before branding was cool? Did it best fit everyone’s needs? Or maybe it was something else.

Why was that “fence” put up? I’ve read different accounts but nothing truly definitive.

Why has that “fence” remained in place for 50+ years? Is it tradition blocking improvement or could it be that what we have is the best alternative after all? That seems to be the case from a spotters’ or an emergency response team’s perspective.

What has changed to make it necessary to take that “fence” down for a different “fence”?

Aren’t these questions that should be asked first before this goes much further?

The fact that the Car Number Placement discussion has gone for so long and now the owners have recently felt the need to commission a study for a new “fence” makes me wonder. If the new “fence’ is so good, why so much hesitancy, why so much work in justifying the removal of the old “fence”?

If truly better, it can and will endure… just like that old “fence” has for so many seasons.

If truly better, why hasn’t it already been done? Maybe too expensive to change mid-season or is being “saved” as part of the all new Next Gen package? Or maybe, just maybe the realization that this new “fence” may not offer everything that old one provides?

Maybe that’s why that old “fence” has stood the test of time.

This sport is in the biggest whirlwind of change it has probably ever seen. “Fence” after “fence” has been uprooted and cast aside for new “fences”. Some forced out of the day’s necessity but others through opportunity it presented. And it’s not over yet as more “fence” removals are in the near future and beyond. Yet I for one wonder if anyone is asking the Cowboy question above?

Change alone will not move this sport ahead, because not all change is improvement.

Only improvement can move the sport in a positive direction.

Though no improvement can result without change, “why” has to be the question asked if improvement is the true end goal.

We just spent a big weekend in Texas. Hopefully a little Cowboy wisdom rubbed off while there.