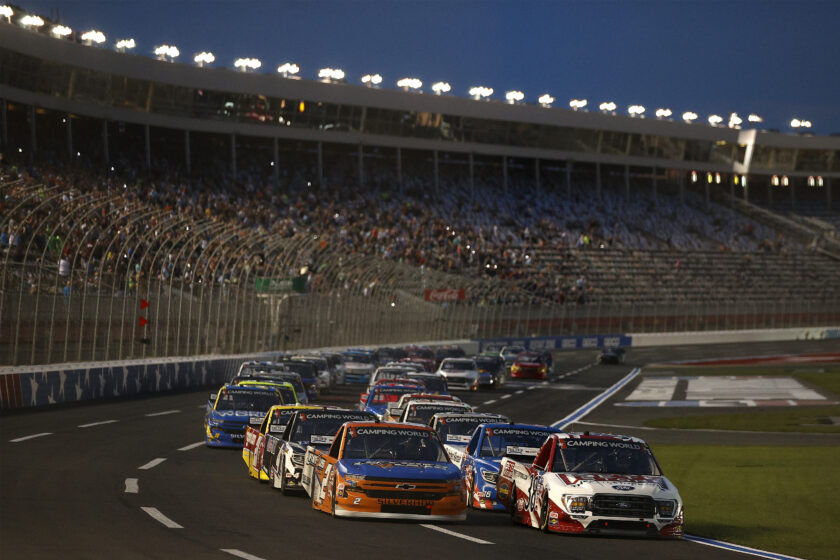 Weekend action started off Friday with practice sessions for all three NASCAR series and Carb day practice for IndyCar. Qualifying and a Truck race was on the menu as well. Mother Nature once again made her presence noted. This time it was IndyCar fans received the worst of it with just over a two and a half hour delay for track drying. The Indy cars finally took to the track and almost got their full two hours practice in before the rain again came down. Scott Dixon was fastest at Carb day practice, Simon Pagenaud second and Josef Newgarden third. With Marcus Ericsson inside the Fast Nine and Felix Rosenqvist with a decent starting spot, hopes were high here in Sweden for Sunday’s Indy 500.

Rain also came down in Charlotte just as Xfinity practice ended. NASCAR opted to cancel Truck qualifying in favor for a Cup car practice session. With the canceled qualifying all 38 trucks that were still on the entry list made it to the race. Last weeks winner Todd Gilliland started from the pole with Sheldon Creed on the outside. Creed took the lead on the opening lap of the race and won the caution free stage 1.

Todd Gilliland came out with the lead after the pit-stops before stage 2. John Hunter Nemechek, fast, soon passed Gilliland. A late caution in the stage opened for some pit-strategy, leaving the door open for Zane Smith to win stage 2.

Matt Crafton’s truck was smoking and speeding down pit road. At the same time Trey Hutchens came to a near stop on the front stretch after having a tire go down. At the same time, Johnny Sauter was full steam ahead battling with Drew Dollar. With no yellow out, Sauter had no warning. Hutchen’s truck was slow and he slammed into the back of it. A NASCAR spokesperson said “…officials focused on Matt Crafton and whether there was any oil on the track that needed cleaning to avoid any further incidents.” Come on NASCAR! Somebody needs to have an eye on what’s going on at the track.

Nobody had anything for John Hunter Nemechek at the end of the race. Not even his damaged truck, hit by flying debris from the Sauter – Hutchens accident, could slow him down. Carson Hocevar second and Ben Rhodes raced for third. Stewart Friesen and Todd Gilliland rounded out the top five. Why not use the red flag near the end of the races instead of having cars going around the track for 8-10 laps, when cleaning the track after an incident?

Riley Herbst won his first the pole for Saturday’s Xfinity race with Chase Briscoe on the outside. Herbst held on to the lead for a few laps before Daniel Hemric took over, and won the stage. Daniel Hemric and AJ Allmendinger took turns leading the first half of the race. Hemric also won the second stage. Ty Gibbs and Chase Briscoe where involved in an incident at the end of stage 2, but Briscoe soon recovered and led laps later in the race.

However at the end of the race Ty Gibbs had made it back to the front. Ty Gibbs had a strong car and led the last 20 laps to take the win. The young Gibbs later went on and won the ARCA  race after leading all 100 laps. Austin Cindric, was second and Harrison Burton finished third. Another top five for Brandon Brown, P.4, and Tyler Reddick P.5 in Jordan Anderson’s #31.

The 105th Indy 500 offered good racing. 36 lead-changes and close racing up until the end. Our Swedish driver had no luck in the race. Marcus Ericsson was one of the many drivers that fell victim to the caution for Stefan Wilson’s crash on pit lane. As so many times before, a caution in the middle of pit-stops always turn things upside down. The next time the caution flag flew was on lap 119. Graham Rahal was coming out from the pits when he lost the left rear wheel and crashed. Conor Daly hit the bouncing wheel but was fortunate to be able to continue the race.

After running inside the top 25, Simona De Silvestro’s brakes failed before a late-race stop and she spun in the pits, and had to settle for P31. I hope we’ll see more from the Beth Paretta team and Simona De Silvestro soon. A few words about Felix Rosenqvist also. Rosenqvist led 14 laps in the race, however problems on the last pit-stop put him a lap down and he finished P.27. After his early troubles, Marcus Ericsson was able to move up in the field and salvage a P.11.

Helio Castroneves was running near the front all day and leading laps and passed Alex Palo with one lap to go. The veteran was able to hold off Palo during the final lap to take his fourth win in the Indy 500. He joins elite company. This time driving for Meyer Shank Racing after spending the last 20 years racing for Team Penske. Alex Palo took second and Simon Pagenaud third, Patricio O’Ward finished fourth and Ed Carpenter fifth

Kyle Larson started on pole for the Coca-Cola 600 with Ricky Stenhouse, Jr. on the outside. Larson took the lead at the start of the race and with only a few cautions this led to much green-flag racing. Kyle Larson led 327 laps of the 400 and with the rest of his HMS team mates running near the front. The HMS-guys led 373 laps total. At the end of the night or in my case the beginning of morning, Larson won with Chase Elliott in second while Kyle Busch took third preventing the HMS drivers to make it another 1, 2, 3, 4 finish. Don’t miss David Nance’s break-down of Coca-Cola 600 here.