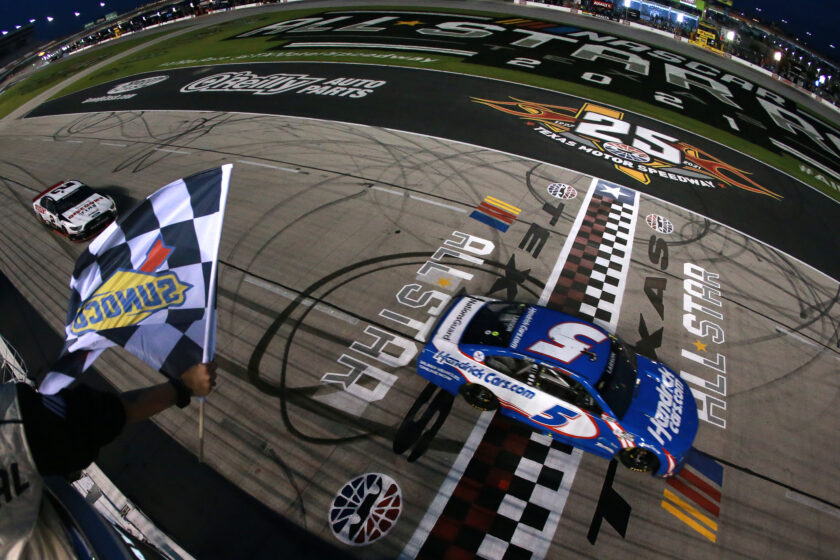 It was an intense weekend this week with double-header races in IndyCar and Indy Lights on Belle Isle in Detroit. All three NASCAR series raced at Texas Motor Speedway with regular point-races for Trucks and Xfinity, along with the All Star races for the “Cuppers”. If that wasn’t enough, there was also the inaugural race for the new Camping World SRX series at Stafford Motor Speedway. With all that racing going on it shouldn’t be to hard to find things to write about, right? Well, maybe it was almost to much to really take in at once.

I’m going to start with a shout out to Linus Lundqvist even though I wasn’t able to watch the races. Lundqvist took home two second place finishes in the Indy Lights races on Belle Isle. Linus Lundqvist, is leading the series one points standings ahead of his team-mate David Malucas and four points in front of third place Kyle Kirkwood.

At the start of Saturdays Indy-race Patricio O’Ward had the pole-position with Alexander Rossi on the outside. While our Swedish racers were starting about mid pack. Felix Rosenqvist had a fast car and seemed to be on the right strategy when disaster struck on lap 23 when the throttle stuck wide open on his car. Rosenqvist’s car gunned right in to the tire-barrier in turn six knocking down the concrete block behind it. Fortunately, Rosenqvist didn’t sustain any major injuries from the incident. Rosenqvist was released on Sunday after spending the night under observation at a local hospital.

After the restart of the race Will Power was leading the race and had the strategy in place along with a strong car. Another incident on the track leading to a red flag took away Power’s chances of winning, when overheating toasted the ICU-unit in his race-car. Marcus Ericsson had moved up to second before the red flag flew. Ericsson found himself in the lead at the restart after Will Power’s car refused to start. Ericsson held the lead on the restart and led the final laps for his first IndyCar win. Rinus VeeKay came in second and pole-sitter Patricio O’Ward third.

For Sunday’s race Marcus Ericsson’s had used up all of his good luck from the day before. That left him running out of fuel in one of the last corners at the very end of qualifying round. Due to that Marcus Ericsson had to start from the 22nd spot on the grid. Josef Newgarden won the pole and took the lead in the race. Newgarden led the first 67 laps before being passed with 3 lap to go by the winner Patricio O’Ward. Felix Rosenqvist was sidelined after yesterday’s horrendous crash and instead Oliver Askew was back in the #7 car for his first race of the year. Askew’s day was cut short when an engine problem forced him to retire with 46 laps in the books.

I’m not to fond of the use of the traction-compound PJ-1. This time again it took the trucks about two thirds of the race before the “Coke-syrup” began to come in. No one could stop John Hunter Nemechek when the track finally came in. Nemechek had been running near the front for most of the race and took his fourth win of the year. Chase Elliott took second place in his first start this year in the #24 truck. Ross Chastain came in third but was later disqualified for an infraction on the throttle body on the carborator on the truck(More here). Instead Grant Enfinger nabbed third place and Austin Hill finished fourth. Chandler Smith rounded out the top five. A shout out to Josh Berry P.10 in his first start in the #25 Truck.

The track came in a bit quicker when running the Xfinity race than it did during the truck race. Kyle Busch was starting a bit back in the Xfinity race but soon made it to the front. Busch led six times during the race for a total 94 laps while racing with most of the guys we normally see inside the top ten. Justin Allgaier took second place and Austin Cindric third. Kyle Busch now has 99 win in the Xfinity series, one more to reach his 100 win goal!!

Ross Chastain had inspection issues and was forced to start from the back in the All-Star Open race. Chastain made his to the front very quick and passed the leading Tyler Reddick to win stage one. At the start of stage two, Reddick regained the lead and held on to it and won stage two. Aric Almirola led the remaining ten laps to win the final stage in the Open. Matt DiBenedetto won the fan-vote to advance into the All-Star race with the stage winners.

I don’t have much to say about the All Star race as Kyle Larson continues his “butt kicking” and HMS is on a roll. I don’t need all the gimmicks with stage and inverts and so on. For me good racing is enough and we had a few laps at the end of the race when Brad Keselowski was racing the HMS team-mates Chase Elliott and Kyle Larson for the win. Kyle Larson won the race with Keselowski second and Elliott third.

I was able to find the first race for the SRX series on Stafford Motor Speedway online after a few days. It is still to early to say much but I think it ‘s going to be exciting to follow the series to see how it develops. It was good to see local racer Doug Coby take the win with Greg Biffle second and Tony Stewart third.