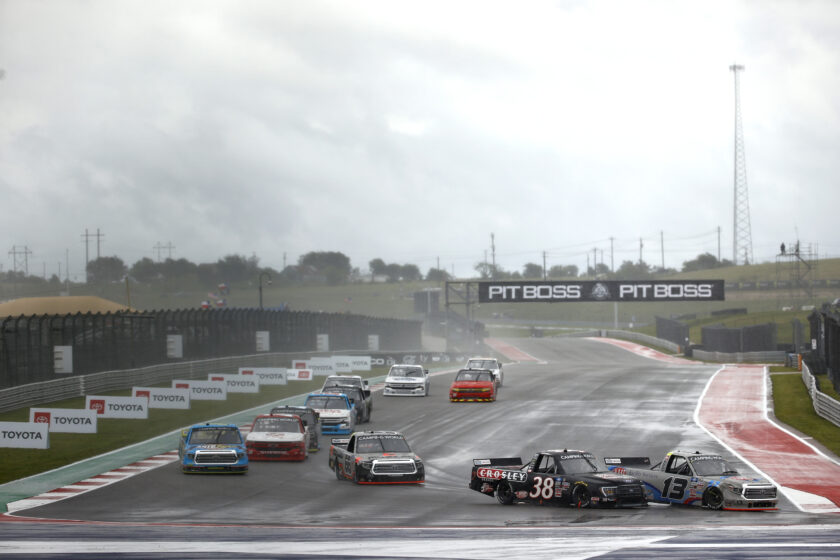 All three NASCAR series racing at COTA, and qualifying for the Indy 500 was on the menu this weekend. Circuit of the Americas is a great race track and it can give us some good, interesting racing in the future. This time however, Mother Nature again stepped in and put down rain on the track. The rain during the weekend left us with a question. How much rain has to fall, before it’s to much? Until next time, I hope NASCAR has taken a long hard look on how to officiate a rain-race and when to make the calls. Also, what can the track owners do to prevent standing water on the tracks?

This was the first time for NASCAR to race on COTA, and hopefully not the last. NASCAR held a short practice session and qualifying for each of the series. In Trucks, Tyler Ankrum won the pole with Kaz Grala on the outside in the wet conditions. At the start of the race Kaz Grala took the lead. Tyler Ankrum slipped back a few spots but hung in the top five for most of the race. With a few laps to go before the first stage break, some of the teams opted to pit for tires and fuel in order to gain track position after the stage break. At the end of the stage Todd Gilliland was racing hard with Kaz Grala and manage to pass for the stage win.

On the pit-stops after stage one, Todd Gilliland received a penalty for the crew being over the pit-wall to soon. In these wet conditions it was hard to get the timing right. Gilliland had to start stage two from the back of the field. With a fast truck and the driving skills to match it, Gilliland managed to navigate through the field and into ninth place before the end of stage two. Ben Rhodes won stage two with Matt Crafton second. Early stage two leader Sheldon Creed once again pitted for tires and fuel before the stage break.

At the start of the final stage, Sheldon Creed soon took the lead from Matt Crafton. After a couple of laps Tyler Ankrum passed his teammate for the lead. Near the end of the race Todd Gilliland had moved up through the field. Once Gilliland had taken the lead no one had anything for him. Todd Gilliland took his second win in the Truck Series and the first victory for Front Row Motorsport’s Truck operation. Kaz Grala finished second and Tyler Ankrum third. This weeks shout out goes to Grant Enfinger, a P.4, driving the #9 for Codie Rohrbaugh; a great finish.

Kyle Busch started on pole in the Xfinity race in drying conditions and he lead most of the first stage. Busch and his crew choose the strategy to pit before the stage break, and that allowed AJ Allmendinger to win the stage. Justin Allgaier and Austin Cindric had led early in stage two before Kyle Busch took over. Again the Busch tactics were to pit for tires and fuel before the end of the stage. This time Justin Haley had the chance to win a stage.

After a couple of cautions in the first two stages the third stage went caution free. Kyle Busch took the lead on the restart and then checked out to win by 11 seconds. AJ Allmendinger was the best of the rest in second and Justin Allgaier third. Kevin Harvick finished in the #5 giving BJ McLeod’s team their best finish ever in the Xfinity series.

Not going to say to much about Sundays Cup-race, Vivan Simons has it covered. Click here. So I’m going to leave it with that, maybe a note or two. Chase Briscoe took home his first top ten of the year in Cup, more to come there maybe. AJ Allmendinger, P.5 scored the first top five for Kaulig Racing in Cup. IMHO stage breaks don’t work well with road courses, it takes away much of the strategy play. However, under Sunday’s rainy conditions, those cautions could have been used to take the time to stop the field and get rid of some standing water at the worst spots

To sum up the weekend, just a few words about the qualifying for the Indy 500. All four Chip Ganassi cars were fast during the practices. So no surprise that Scott Dixon won the pole for Indianapolis 500, Dixon’s fourth pole for the 500. Colton Herta and Rinus VeeKay will complete the front row. All four Ganassi cars and no Penske cars in the fast nine was something of a surprise to me. The Swedes Marcus Ericsson and Felix Rosenqvist will start from P.9 and P.14. Good to see Felix Rosenqvist improving his time when making his second run on qualifying day. And Simona De Silvestro making the field, for her sixth time, taking the last spot on the grid.