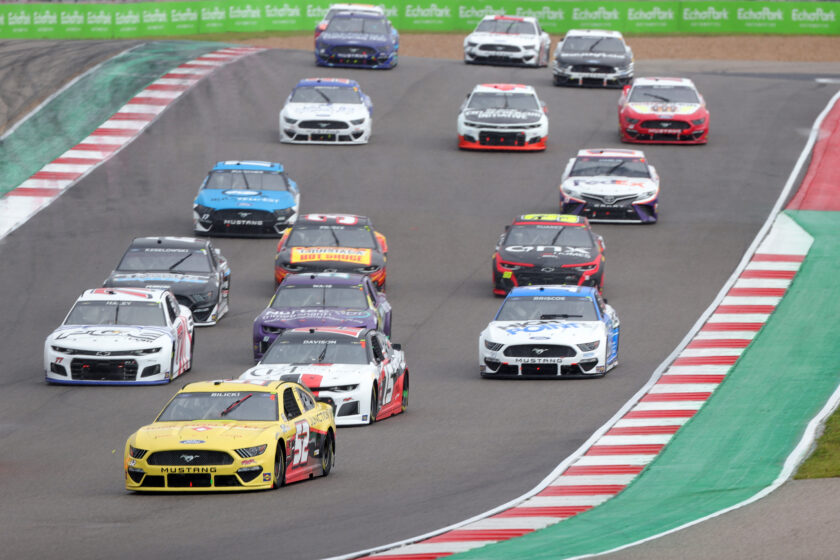 Authors note: Please bear with me on this one. It is longer than normal and I interjected some of my thoughts and personal feelings on some things. Thank you.

I totally enjoyed the invocation, but it seemed as if our National Anthem left a bit to be desired.

Seems rain was bound to affect the Cup race at COTA even though they were prepared to race in the rain. The cars had a wiper on the windshield and a red flashing light on the upper left side of the back window. There were a few drivers who opted to use rainex so they would not have to use the wipers. They had slicks in case it did not rain and rain tires in case it did. Before the race started, NASCAR let the cars come down pit road and change to rain tires if they chose to. Regardless of whether they changed them or not, the starting lineup would remain the same. That was the only thing allowed and when Blaney’s team removed some tape, they were penalized and he had to start in back of field. We were then told at Keselowski’s team adjusted some tape also, so they were penalized and Kez had to start at back along with Blaney. Mike told us they had not lost the track yet due to the rain. The stands looked as if they were full, even with rain in the forecast. We were told at one point that Texas fans would always be in attendance, regardless of weather

Stage 1 started and Cindric took the lead. Before lap one was complete, Byron was on the radio and said he needed different tires. Shortly thereafter, Byron, Logano, Elliot, Bowman, Reddick, and even ‘Dinger came in and changed their tires. Cindric and Truex were still on slicks. By this time, Cindric was putting on a show and had pulled out to a nice lead even though he was on slicks. When he finally came it, he was 8th when he returned to the track. While we were at commercial, the caution came out. Suarez had wheel hopped and locked up the gear in neutral. Pit road opened and about half the cars pitted and put on tires and got enough fuel to last them until the end of stage 2. Suarez lost a few laps while pitting and trying to get his gear out of neutral. On the restart, they got 4 wide and Cindric moved up to third. We were told that the Penske drivers’ wipers worked better than anyone else’s and then some of them were shown on TV. It was also mentioned again that some drivers chose to use rainex and not depend on the wipers. If one used the rainex and wipers, then the wipers would smear the windshield and one would not be able to see through the mess it would create. LarryMc told us some drivers may pit before pit road closed at 2 laps to go before the stage ended, to help them gain an advantage. Garrett Smithley spun but got started going straight again so there was no caution for the spin. DiBenedetto got into Byron and went to pits to check damage. I was uncertain what happened there as the booth did not really make it clear. Logano won stage 1.

Logano was still in the lead at the start of Stage 2 even though Briscoe, Cindric and Reddick came off pit road first. However, since not everyone pitted, they did not start at front of pack. On lap 17, Blaney’s car was badly damaged after being hit by Bell. The caution came out for this. Bell was taken to the infield medical center to be checked out and was released as being okay after the crash. Blaney was able to get car repaired enough to go back on the track. During this melee, Harvick checked up and was hit in rear by a speeding Wallace. Both were out of the race due to the crash. Wallace refused an interview, so his crew chief spoke for him, when Jamie requested an interview. The booth told us then that each driver had 3 spotters each who were placed at certain places around the track since it is considered a 3½ mile track*.

When Harvick was interviewed, he was very unhappy and said: “It’s the most unsafe thing I’ve ever done in a race car by a lot,” he said. “You can’t see anything down the straight-aways. These cars were not built to run in the rain and when you can’t see, my spotter said, ‘Check up, check up,’ because he thought he saw two cars wrecking.  “I let off and the guy behind me hit me wide-open because he never saw me. It’s unbelievable that we’re out there doing what we’re doing because we’re in race cars that aren’t made to do this, and if you can’t see going down the straightaway it’s absolutely not safe, not even close.” On Sunday, I read that several other drivers, including Truex, who was also in a horrific crash, basically said or alluded to the same thing. However, when asked about this, NASCAR spokesperson, Miller, said Harvick was entitled to his opinion, but he doubted that any of the other drivers felt the same way. I think that most drivers agreed that NASCAR having them race in the down pouring rain was a mistake.

At restart, Logano and KyBu were on the front row. It was good to see that Preece wound up in 2nd after the race restarted and everyone was trying to gain positions. On lap 25, Truex got loose, McDowell slowed for this and then was hit by Custer who wound up getting underneath Truex. Everyone was okay and also thankful no one was badly hurt. (IMO, although I think it is okay to race with some rain, they should not be racing in downpours like they were having then.) They did call a red flag and brought the air titans out to dry out the standing water at some places on the track. They then resumed the race. (On another personal note, while they were under the red flag, I thought about how much fun it would be to ride a motorcycle on this track, as long as it was not raining.) When they went back to caution, they brought all the cars down pit road and stopped them outside their pits. They allowed 3 pit crew members to go to each car and service the driver’s helmet, visor and also wipe the windshield inside and outside. I had never seen this done before. They were told they could have a normal pit stop when they chose to pit next time. They showed us the 2021 top 5 driver stats of best pit road times which included time in, pit service, and time out of pits. Harvick led the list with shortest time on pit road. LarryMc told us that as a crew chief; he would start running the race backwards as far as pitting was concerned. Back to racing and when the green/white checkered flag flew; it was KyBu who crossed the line first, therefore winning stage 2.

Stage 3 started with KyBu in the lead. All was well until 32 laps to go when Kez spun around, but he got started again so there was no caution. With 30 laps to go, KyBu had over a 6 second lead and the race had become quiet. There was some competition in the pack and we got to see some of it but mainly they stayed with the first few drivers, as usual. We did see Reddick spin around but there was no caution. They showed Chastain making some aggressive moves when there was some close racing with Dinger. We were shown several other cars and incidents, but no remarks were made about them. Green flag pit stops started and most drivers came in for tires and fuel. With 25 laps to go, we got reports that Elliot and KyBu would both have to pit again as they were approximately 2 laps short on gas. The race was fairly steady at this time. With 24 laps to go, we got a spoiler alert about the pole winner for the Indy 500.

(At this time, I would like to say something that has really been a pet peeve of mine, and many others, for years. Mike told us if we planned to watch Indy pole qualifying later, to mute our TV’s, but then blurted out the pole winner before one had time to mute. WHY, oh WHY, do they do this, when a racing event is being shown later? Fans do not want to know what happened or who won what in advance. Thank you for letting me vent about that.)

Back to the race now. The cars were getting strung out. Positions were changing due the pit stops, but the rain was persisting and getting a bit heavier. The track was getting a lot wetter, but with cars not too close together, there were no incidents at this time. KyBu resumed the lead when Bowman pitted with 21 laps to go. After pits, Bowman was in lead again and Elliot was 2nd. With 19 laps to go, KyBu made an incredible save. Bowman pitted and that put Elliot in the lead. 17 to go, he had a 10 second lead on Larson. With 15 laps to go, KuBu hydroplaned and split Dillon and KyBu and wound up in the gravel. However, he stayed on the gas until he got to the grass and then was able to drive back on to the track. I am just amazed that he was able to do that. The broadcast crew expressed the same sentiment. With 14 laps to go, NASCAR brought out the caution. There was water standing on both the front and back stretch. While under caution they showed us the big rooster tails from cars on the track and also how some of them were hydroplaning. Cindric spun when coming out of the pits due to cold tires and rain on the track. Byron was hoping they could go back to racing so he could extend his streak of top 10 finishes in the series. They brought out the red flag. They talked with several drivers and made note of the number of campers, which was double of what they normally get for a race. After a few minutes under red and right after they talked with Briscoe, they called the race, and declared Elliot the winner. Larson was 2nd, Logano 3rd, Chastain 4th and Dinger 5th. One of my favorites, Briscoe, finished in the 6th position.

Thank you for reading and I would love to have your comments, whether you agree or disagree with me. Also, if I left something out you would like to mention, please feel free to do so.