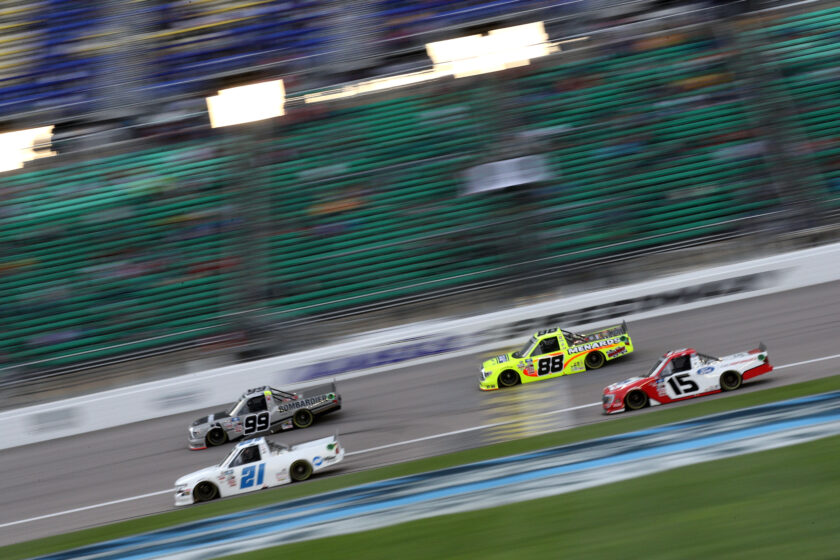 Coming into this weekend we had racing at Kansas Speedway for NASCAR Cup and Trucks. Also a double header IndyCar race at Texas Motor Speedway. IndyCar races on Texas MS are still to me a bit nerve wrecking even after so many years after Kenny Bracks horrific crash back in 2003. And with the top grooves prepared with PJ1 from the NASCAR races only makes matters worse. Indycars don’t respond well to PJ1 which is really a concoction of syrup and oil.

In the Truck race at Kansas we had a stunning 14 pit road speeding penalties, with C.J. McLaughlin in the #34 truck having 5 of them! It also make me sad to see 2 undamaged, from what I could see, truck being black flagged for not making minimum speed. One of them being Norm Benning. Benning had a really bad weekend not only did he get black flagged for being to slow in the race, he also got his Ford F-350 stolen and had to spend the night in the trailer inside the Trucks garage. Update HERE;

Kyle Busch also won stage 2, Creed and Nemechek was running near the front and a bit further back Ross Chastain was driving up true the field. Chastain being back once again back in one of the Niece Motorsports trucks. Great to see Hailie Deegan running around and inside top ten.

At the start of the final stage we had team mates lined up Sheldon Creed and Zane Smith on the inside and Nemecheck and Busch on the outside. John Hunter Nemechek and Sheldon Creed was fighting for the lead on the first lap after the restart and when Zane Smith couldn’t hang on behind his teammate Creed, Kyle Busch had plenty of room to dive under Creed and Nemechek to take the lead. However with the two first stages running without any cautions it didn’t take long before the first caution came out here in the final stage. Sheldon Creed took the lead on the restart while Busch got shuffled back in the field. With a long green flag run and a few different leaders during the green flag pit-cycle. Johnny Sauter held on longest to the lead, hoping for the caution. Sauter eventually had to pit for fuel, giving the lead back to Kyle Busch. About 10 laps later Jennifer Jo Cobb had an electrical issue with her truck and needed help to get the stalled truck of the track. On the restart, Ross Chastain took the lead from Busch but again the caution came out when Stewart Friesen got loose and spun, hitting Derek Kraus. On the last restart of the day, Kyle Busch was able to pass Chastain to win. Ross Chastain held on to second and Austin Hill came in third. Shout out to Bayley Curry P.12 after he spun his tires on the last restart and got shuffled back. Also Hailie Deegan P.13 after running some laps inside top ten.

Rain in Texas and a long time to dry out the track forced IndyCar to cancel Qualifying for the races and opted for a practice session instead. With the starting grids to be set by points, Alex Palou was on pole with Will Power on the outside. Scott Dixon started from third on the grid but took over the lead on lap 2. Scott Dixon than lead all but 6 laps of the 212 lapper. Dixons team mate Alex Palou lead the other 6 laps on his way to a forth place finish. Just as the first pit-cycle had started Josef Newgarden hit the rear of Sebastian Bourdais car and sent him into the outside safer barrier bringing out the caution. As always when a caution comes out in the middle of a pit-cycle there are winner and there are losers One of the winner was Scott McLaughlin and Alexander Rossi while Marcus Ericsson and Will Power lost a couple of spots. The Swedes Marcus Ericsson and Felix Rosenqvist made a lot of progress and was moving up towards the front and Rosenqvist was running second when the caution came out for James Hinchcliffes crash. On the pit- stops disaster stuck Marcus Ericsson when the right rear wheel came off when he left the pit stall. Felix Rosenqvist had a very slow pit-stop and when he finally got out of the pit stall he was forced to take to the grass to avoid Ericssons stranded car! In the end no one had anything for Scott Dixon this day. Dixon won with Scott McLaughlin in second. McLaughlin made the most of his good fortune, with the way the caution fell earning him 7 spots in the running order. Patricio O’Ward in third, Alex Palou fourth and Graham Rahal fifth. Felix Rosenqvist recovered to P.13. Marcus Ericsson in P.19 first car a lap down.

Just a few notes from the Sunday Cup race, for more details, check out Vivian Simons review, click HERE. In the truck race we had 14 speeding penalties, here in the Cup race only two. However NASCAR called for five penalties for tire violations during the race. One of the being addressed to Tyler Reddick when one of his tires got away from the crew, rolling across pit-road and coming to rest on the grass. NASCAR decided to waited for the green flag pit-cycle to run true before bringing out the caution. During the broadcast the FS1 booth told us that the pit-crew of Denny Hamlin had made a mistake, only securing three lug nut on the right rear tire. I was under the impression that if NASCAR found out you where missing one lug-nut you would have to come down pit-road to address the issue. What can one say, NASCAR makes the calls, not me but I’m not to sure there calls would be the same as if had made them.

New Race this time in Texas and a new mess with a wheel on the lose. First an even bigger mess with a big crash coming up to take the green flag. After 18 laps of clean up and 6 cars out of the race, they finally got the race on the way. Scott Dixon started on pole and took the lead followed by his team-mate Alex Palou. During the race Felix Rosenqvist was moving up in the field after starting back in p.17 and made it into p6. On lap 190 disaster struck Rosenqvist when he lost his right rear wheel and in the end of the day came in 2 laps down in p.16. Marcus Ericsson had a bit different pit-strategy at the end of the race. Ericssons strategy didn’t work out and He ended up p.12. Congrats to the first time race winner Patricio O’Ward, Josef Newgarden came in second and Graham Rahal third.

IndyCar has a interesting mix of drivers right now with some young and upcoming driver along with veteran driver with a lot of experience, this is going to be interesting to follow along the way. I hope IndyCar will add a few more oval races, on shorter tracks, instead of one of the Texas races, to the schedule for next year.

There you have it three lost wheels on the race-weekend that impacted the outcome of the races.