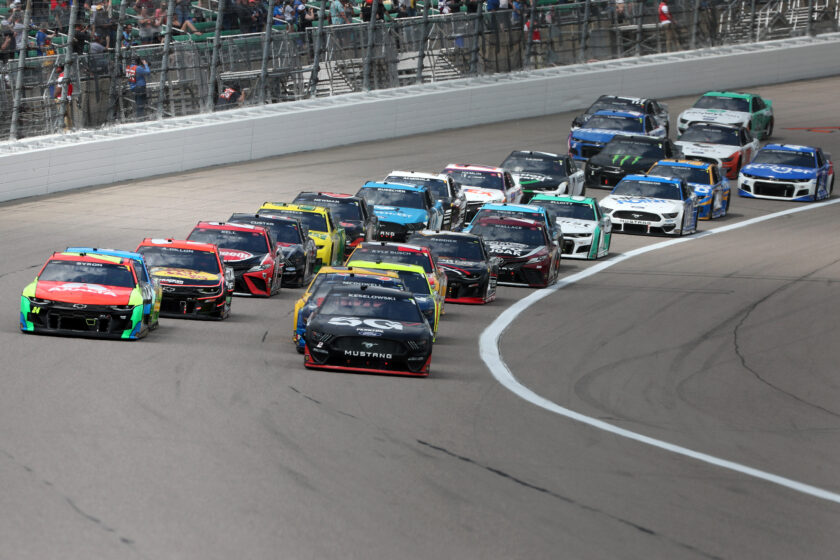 Before I write my review about the race and broadcast, I would like to mention one of my other favorite sports. I know this is an Auto Race site, but I am a very avid Supercross and Motocross fan and want to briefly mention the finals of the Supercross season on Saturday night. Both the 250 and 450 series were extremely competitive. The broadcast was great and I was glued to the television for 3 hours watching it. I was happy with the season Champions in both series. Now on to the NASCAR race.

I missed the invocation and National Anthem this race. I tuned in just before the start of stage 1. The Busch ad fellow gave the start engines command, and it was great to see fans in the stands for this race. Mike, Jeff and Clint were in the booth as usual with Jamie and Regan on pit road and Larry Mc was the tech reporter. We were told there had been 10 different winners so far this season. Jeff predicted there would be a new one at Kansas, and then Jeff talked with Byron on the radio. They gave us the names of the first 6 rows and then we had to follow the scroll for the rest. This is the norm each race and I still wish they would name them all for the fans. After that, Larry Mc mentioned that pit road could be very treacherous where many penalties abound. After they showed Logano’s rollover from last week, Jamie told us he had food poisoning a few days ago but hoped to drive the whole race. He had missed being in the booth for the truck race due to that problem.

When Stage 1 started, Kez took the lead and they updated us on the field. Then they said Larson was up 11 spots and that he had said he liked the track. It was mentioned how it was Clint’s favorite track to which Clint told them the only reason it was, was because it was home. Jeff told us the seams had less grip normally. The first commercial came 10 laps into the race. They came back at lap 15. The field was getting strung out already. They gave us updates on several drivers and how they drive. Larson and Reddick were moving up through the field pretty quickly. Harvick had dropped back to 5th. There was a competition caution at lap 25 and Larry Mc told us most cars would get 4 tires. I think it was Mike who told us there were 33 cars on the lead lap. Regan told us Harvick needed more grip and Jamie gave us updates on Byron and Kez. Larry Mc said they should be able to make it to the end of stage one now. They were back on track and got strung out fairly quickly. We were told Briscoe had pit penalty and that Newman got a penalty for body modification, which was pulling on the right side skirt to give advantage. Kez was still leading at this time. We got a brief history on Clint, as a driver, back in the day on the Kansas track and were told Byron had 8 top ten finishes and was doing great. Larson passed Kez and shortly after so did KyBu and Reddick, then KyBu passed Larson to win the stage.

Larson came out of pits first to start Stage 2. Jeff mentioned that the wind had gotten heavy on the back stretch. Clint told us that Truex was on the move. They showed us a bit of jockeying for positions 5, 6 and 7. They got strung out again and started green flag pit stops with 41 laps to go in the stage. Cody Ware spun on pit road but righted it so there was no caution for that. With 12 to go, Larson was back in the lead after passing the cars which had not pitted yet. At this time, there were 17 cars on the lead lap. Larson went on to win stage 2.

At the start of Stage 3, they were 3 and 4 wide right away. Larson was leading. Wallace and Bowman tagged the wall. Reddick on radio said he was not feeling that great and that his ice pack had fallen down from his chest. Mike mentioned the weather and clouds up above. We were also told only one person had won Clint’s $10,000. That was great! With 83 to go, they were strung out big time. They then gave us their ones to watch: Jeff – Larson, Clint – KyBu, Mike – Hamlin and Jamie – Kez. They finally had a ‘Crank It Up’ with 78 laps to go. It was a sad one because they were so strung out on the track, and the sound of just one car at a time going around the track was not very exciting. Jeff got frantic about some side drafting and Mike asked if they got that excited about it when they were still racing. Then they talked about the playoff picture. Green flag pit stops started early with 61 laps to go. They could now make it to the end if they pitted now. Reddick had a loose tire go across pit road into the grass and was penalized for that. However, NASCAR did not throw a caution until the pit cycle had been completed. The caution came with 38 laps to go.

Everyone pitted and Logano advanced many spots because he only took 2 tires. There were only 12 cars on the lead lap now. Hamlin had the lead and Larson was really pressuring him. Hamlin hit the wall pretty hard and Larson took the lead. Jeff said it was grip, but I think Hamlin was just watching Larson in his mirror instead of the track. JMO…lol. Caution was out with 22 laps to go. Back to racing, Dillon hit the wall and with 15 laps to go, Stenhouse spun and hit Cindric causing another caution. With 10 to go, on the choose rule, Larson took the outside but KyBu took the lead. Then Bell spun and took Stenhouse and Preece with him. While pitting, Preece hit his tire carrier and knocked him down, but he got up and kept working. I have not seen any updates as to whether he had any injuries or not. On the restart with 2 laps to go, KyBu took inside and Blaney took the outside with Larson behind him. Larson was pushing Blaney and looked like they may take the lead from KyBu, but Larson continued to push him in the corner so they both got loose and wound up going backwards. At the finish, KyBu was the winner with Harvick 2nd and Kez 3rd. Larson finished 19th and Blaney finished 21st. This was very disappointing to me, but Congrats to KyBu on his 36th birthday!

Thank you for reading. Your comments and thoughts will be much appreciated. Stay safe.