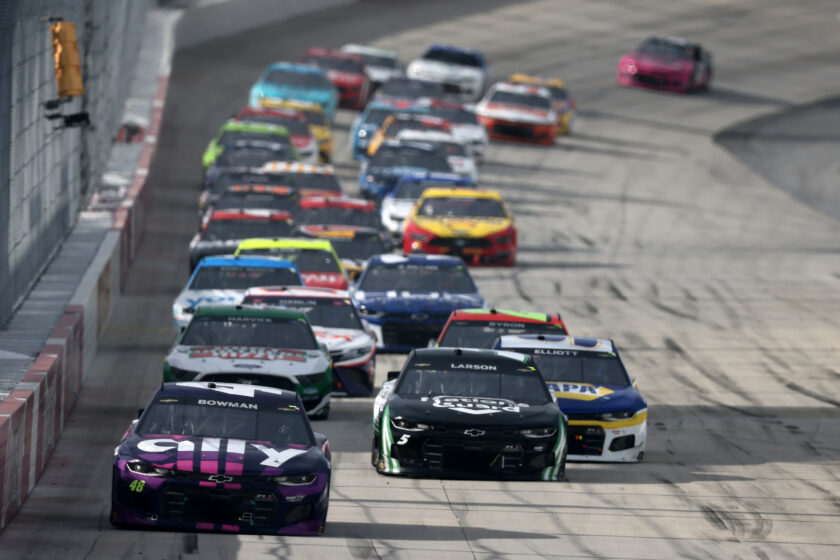 The Drydene 400 from Dover proved to be a historic event as Alex Bowman led Team Hendrick to a 1-2-3-4 finish. It was only the fourth time in the 72-year history that a race team swept the top four positions. Additionally, Bowman’s winning pass was a result of the 48 team busting off the fastest pit stop of the 2021 season to win the race off pit road. Restarting from the favorable outside pole, Bowman then blasted into clean air to lead the last three runs for the final 92 laps and the win.

It was some kind of race.

Hendrick drivers went to the front for seven of the ten lead changes and led all but 18 of the 400 laps. “Butt-kicking” was the most common description used for the race.

Although I watched the FS1 coverage of the race, I had trouble getting a feel for it. The booth gushed over the race, but once when coming back from commercial you hear Mike Joy lead with we’re showing the best race on the track for position 16. It makes you wonder.

For us who couldn’t attend and have to rely on the broadcast, I believe that a good broadcast can’t make a bad race good, but bad coverage can make a good race bad. Heaven help you if you have bad coverage of a bad race.

So what was it Dover?

Besides being historic, was it a competitive race?

I spent the first part of the week listening to the various SiriusXM programs to try to get a better perspective. I heard broadcast after broadcast that seemed to be trying really hard to convince the listeners that it was a good race. While listening, I turned to the NASCAR Loop data to try to get more clarity. I realize numbers never tell the whole story but NASCAR gathers data for a reason. What did their numbers show for Dover?

Moving to the very front, this race had a total of 10 lead changes among five drivers, with the Top Three driving for Hendrick. Compared to last year’s double-header races, each of which were 89 laps shorter than Sunday’s race had 15 lead changes each.

Kyle Larson’s lead change on Lap 38 was a result of Larson’s team winning the race off Pit Road. Bowman’s winning lead change was actually a Pit Position Pass as he took the lead from Larson when Larson brought the field onto pit road and relinquished the lead when he pulled into his pit stall before the Start/Finish. Bowman continued to his stall beyond the Start/Finish line to take the lead and then his crew busted off the fast pit stop to allow him to retain that lead which he never relinquished.

To put all this in perspective – if nothing changes but Byron and Larson pitting past the Start/Finish, there would have been two caution flag lead changes. This further shows Team Hendrick’s domination of the race as no other team could best them on pit road.

Green Flag Passes for the Lead

If a driver passes another for the lead at one of the numerous scoring loops, that registers as a Green Flag Pass for the Lead. This race had 1. This means that there was no back and forth battles for the lead. In this case, once Byron passed Truex, Jr. that was it.

This also shows Team Hendrick’s domination Sunday as once they got the lead on lap 16, we saw no other team pace the field for the remaining Green Flag laps – a pretty good indicator of a team butt-kicking.

Sunday’s single green flag lead change was a result of racing pass. This is just an old-fashioned one driver takes a lead from another. No restart. No leader pitting from the lead. One driver passing another. William Byron used lapped traffic to get the only green flag lead change on lap 16. After that, whichever Team Hendrick car was in the lead when the green flag dropped, held it to at least the next caution.

Kyle Larson won Stage One leading the final 80 laps of the Stage. He won Stage Two leading another 68 laps. Bowman led the final 97 laps for the win. Domination.

What Does the Lead Change Summary Show?

Below shows a breakdown of the Lead Changes for the Drydene 400. This gives you a different perspective on how the race unfolded

A couple of things that stand out is there were no passes for the lead on restarts-once the leader took the green, they were gone. Also, with the way the cautions fell for the race it created no long green flag runs that necessitated Green Flag Pit Stops. As a result, we didn’t see any pit stops (or lead changes) for those strategy calls.

The one thing that is clear – Team Hendrick had the field covered on the track and on pit road. This is what total team domination looks like.

What about Brad Keselowski?

Brad had little impact on the Dover race. He started 15th, climbed as high as 8th, earned 3 Stage Points before being involved in a Lap 315 incident that allowed him to finish 16th. He led no laps and his average position for the race was just outside the Top 10.

Not exactly a Brad K kind of race.

So why mention him in the title?

Monday morning brought the usual post-race discussions. With it came a steady stream of explanations of how what we saw Sunday, besides being historic was a pretty good race. It continued until mid-Tuesday morning when Jim Utter, Editor for Motorsports.com broke the news that Brad K may become the next owner/driver, leaving Penske to become part owner in Roush-Fenway Racing.

And just like that, Brad K roared to the front to dominate discussions and mercifully relegated Dover to the back burner to quietly slide into the history books.

Good or bad, competitive race or not, it hardly matters now.