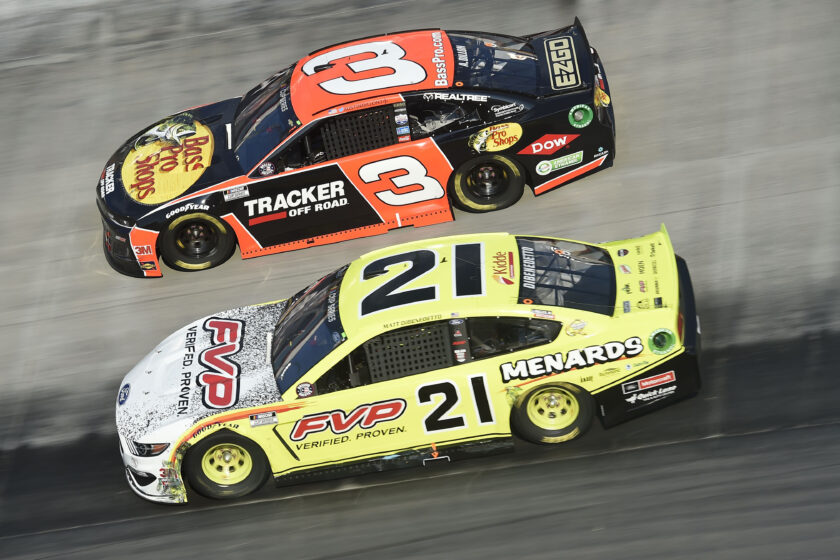 Once again, the placement of numbers on Cup cars has reared its head again. Race Team Alliance hired Nielsen to do a study about the added value of moving the car numbers. The study concluded that moving the number from its current location in the center of the door would get more sponsorship value. The results were simple math.

Make sense? Did someone really need a study to figure this out?

I’m a traditionalist (I learned this week I have a new title, but that’s a future article) so I’d be satisfied to leave them just where they are. I’m having a bit of trouble imagining the Wood Brothers with their iconic #21 anywhere else but on the door. To me and to I believe some others who have followed the sport for a while, the Wood Brothers “look” transcends a sponsor’s “look”. To borrow a wise friend’s description of such situations as moving their number, it’s not wrong, but it just isn’t right.

Maybe you have a team that fits that bill as well.

I’m a traditionalist but also a realist and understand that sponsorship money is what fuels the sport. I fully understand that a number move brings more value to the sponsors or may bring in more sponsors and that is why the owners and NASCAR are exploring it. I can only imagine what impact moving car number locations would have on revenue streams such as die-casts.

Motor Racing Network broadcaster and SIRIUSXM SPEEDWAY show host Dave Moody said on Thursday that NASCAR released images of cars with fairly complex sponsorship graphics that had the numbers placed in the three locations – near the front tire, middle of the door and near the rear wheel.

When it came to the car number he could tell no difference.

Since a long-time racing broadcaster like Moody, whose job depends somewhat on accurately identifying the cars can’t tell the difference and since no one from the Sanctioning Body has come forward to explain why they need the number in a specific location, does it really matter where the number is placed?

So here’s the idea –

On the issue of Car Number Placement, NASCAR should do three things:

1) Dictate the size the numbers to fit the Sanctioning Body’s needs,

2) identify three acceptable locations where the numbers can be placed, and

3) step back and leave it to the owners who asked for this, their teams and their sponsors to come up with the best location to best suit their needs for the most benefit.

The owners asked for the study. The owners got the study results. Give them the flexibility to put the numbers where they see fit (within the three NASCAR defined locations). Let the owners and sponsors hear the fans cheers or their ire and grief for their decisions.

If Denny Hamlin needs to move the number forward to get a big Ray Hendrick’s Flying 11 on his car to satisfy a sponsor… let him. If NAPA looks best on Chase Elliott’s car with the number near the rear wheel… have at it. Should NASCAR force the Wood Brothers to move their iconic number 21 from the door if they really don’t want to? Shouldn’t that be their choice?

Give the teams the flexibility. Now is the time.

Number Placement is one area where NASCAR needs to step back and let the owners have at it. They are big boys. Give them the boundaries and let them figure it out. From the sounds of things with the NEXT GEN car, number placement is one of the few things teams could have a choice on.

There would be one exception to this rule. For the Throwback Race at Darlington, the numbers would have to go back to the door, just like they were “back in the day”. If you are going to “talk the ‘back to our roots’ talk” then “you have to walk the walk.” If one race to go back to our roots creates an excessive financial hardship for anyone, maybe this sport is just too expensive.

Simple. Straightforward. No Fuss. No Muss.

If there is any fan criticism, they can level it not at the Sanctioning Body, but at the ones who initiated this – the owners.

In the meantime, fans need to prepare and understand that this will be for a short time. Once the benefits of number placement movement is realized, don’t be surprised if owners don’t push for the max – numbers on the side windows like the Aussie SuperCar above.

The Aussie SuperCars have done it for years, so we know it can be done. NEXT GEN borrows heavily from the cars in that series. We’re moving off the ovals to road course just like them. Is it that much of a stretch to put our numbers in the same location as they do?

Only time will tell. Maybe NASCAR could set up a bet for it. I haven’t seen what the Over/Under is for when it will happen but it’s probably out there in sports gaming world somewhere.

Everything else seems to be.

While the broadcasters toss this and other topics out on the airwaves for cussing and discussing like the NEXT GEN Uni-Nut and resurrecting North Wilkesboro, have you noticed what we, the fans aren’t talking about anymore?

The race. The product on the track.

If everyone is so concerned about sponsorship dollars, what’s going to bring more attention to existing sponsors, draw more sponsors into the sport and add more value to those whose names and logos adorn the hood and sides of cars-moving a car number forward or backwards a foot or so or putting on a darn good race?

I doubt you need a study for this one.

Unfortunately, the constant barrage of never ending “change” diverts the fan’s attention from what is truly important…

Bottom line – Put on good races, the rest takes care of itself… including sponsors and their value.

Put on good races, fan “issues” like the Uni-nut and Number Placement will fade to the back.

Now there’s an idea for you.