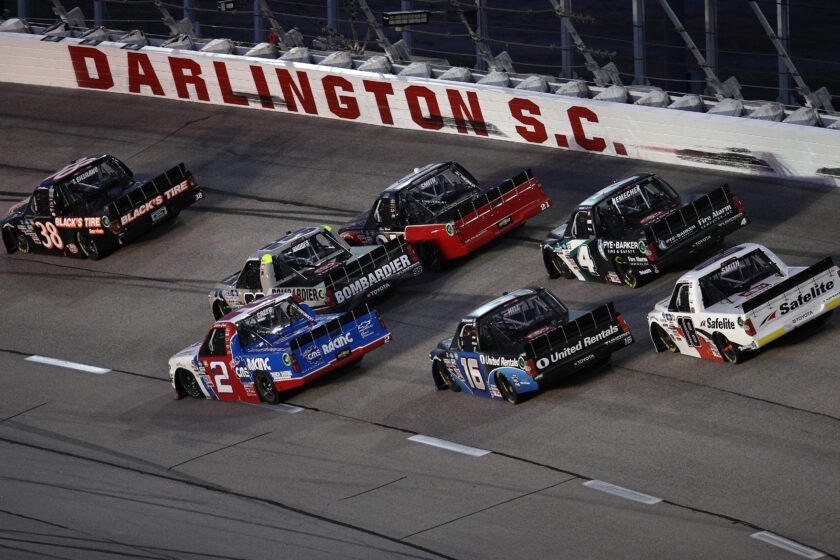 Darlington Raceway and a weekend with a lot of nice paint schemes on cars and trucks along with lots of stories about our legends of our sport is usually GREAT. And this weekend was no exception, as this may very well be the best one of the throwback weekends I’ve seen so far. A nice move by NASCAR to have it on Mothers Day and celebrate the Moms of the world, which made it a special weekend.

Trucks started off the weekend Friday Night under the lights. The Trucks always put on a show for us. This time maybe a little to much was going on.12 Cautions and well over 44 % of the race under cautions is to much. I sure would liked to have seen a bit more green-flag racing, even if restarts make things interesting.

Whenever you bunch up the field on a restart within 30 laps to go and have three groups of truck with different tire strategy, it is a sure recipe for disaster. This time the big one involved 17 trucks. On the restart On the lap 118 restart John Hunter Nemechek had the lead with his team-mate Corey Heim on his inside. Both trucks where trying to find some grip on a bit older tires. When pushed into each other from behind, it was all on from there. All three KBM Trucks were involved in the big one so no sixth win in a row for KBM this time. John Hunter Nemechek had to settle for a stage two win and a p.8 finish this time. Corey Heim has been doing great in ARCA this year and was running up front in the race but fell victim of the DVP clock. The third KBM driver Chandler Smith got parked by NASCAR for speeding around the safety vehicles. Surprised to see no one picked up on that story!

Sheldon Creed was a trucker who managed to navigate the mess of the big one. After doing battle with Ben Rhodes, Creed won the race. Carson Hocevar in third and the rest of the Thorsports gang p4, p5 & p6. A shout out to Timmy Hill, p7 must feel like a win after all he had been through during the race. Also, a shout out to Todd Gilliland for leading laps and winning stage1.

Bonus money was on the line for four of the Xfinity teams. This also means no “Cupers” other than in the FS1-booth and some quite good racing on the track. If I could make a wish, there would have been less cautions At the beginning of the race AJ Allmendinger took the lead . How ever it didn’t take to long before Austin Cindric took over and also the first of the nine cautions fell. Cindric and Noah Gragson took turns leading the race a few time with Austin Cindric winning the first stage.

Daniel Hemric came out with the lead after pit-stops and held off Noah Gragson on the restart. Hemric led up until a caution fell a few laps before the stage break. This mixed up the field as some teams decided to pit for tires and fuel and others opted for track-position. These different tire strategies normally make the restart interesting. Hemric had opted to stay out in the lead but after all on the lead-lap had pitted felt there was something wrong with one of his tires and had to pit. AJ Allmendinger had the lead with Brandon Jones on the inside for the four lap shoot out to the end of stage two. Allmendinger seemed to have the stage win in his hands but Harrison Burton came flying by him to take the stage 2 win.

Noah Gragson lead early in the last stage but in the end it was his team-mates Josh Berry and Justin Allgaier who seemed to have the strongest cars and the strategy in place. On the final restart Allgaier and Berry were racing each other hard. Justin Allgaier took the win and Josh Berry finished in second. Brandon Jones was third with Daniel Hemric and Jeremy Clements rounding out the top five but only after Noah Gragson’s car didn’t pass post race inspection. JR Motorsports has appealed the DQ so we’ll see if AJ Almendinger gets to keep the Cash for Dash money or not. A shout out to Landon Cassill p.11 in the Johnny Davis #4.

I’m only going to say a few words on the Cup-race and give you the link to Vivian Simons review. Here in Sweden we get the International broadcast from NASCAR and due to a great Sat. Op. it’s commercial free. So while other viewers were on a commercial break before the starting of the engines, we got to see Leonard Wood drive their Mercury and the Bill Elliott Thunderbird around the track. What about the racing action you might ask? Well IMHO I think the racing was great even if Martin Truex Jr. had a dominant car and led 248 of the 293 laps. The race still had good, tight racing. To me, the High HP and low downforce package was a real winner.