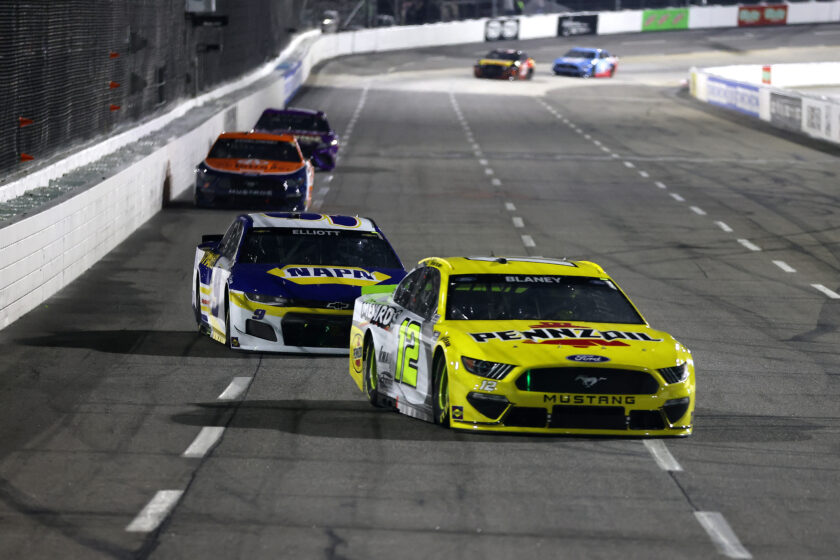 The race was late getting started due to weather, in other words, rain. The Race Day panel, Shannon Spake, Jamie McMurray and Larry McReynolds, kept us updated on what was happening on the track and with the teams while they were waiting for the rain to stop. When the rain stopped, they brought out the Titans to dry the track, hoping the rain would not come back and they could begin the race. They also talked about previous races and drivers. When they were talking with Brad Keselowski, Brad said rhythm was everything at Martinsville and to do good there, you would have to get into a rhythm. They talked about Joey Logano and it sounded strange when Shannon called him “J Lo”. Personally, I was not impressed with that. Larry Mac talked about rhythm on pit road and Clint Boyer told us what a big part lapped traffic plays in a race.

Finally, the track was dry enough to start the race. The Invocation was given and then they announced the performers who would be doing our National Anthem. Jake Peavy and the Outsiders played something, but I am not sure what it was, but it did not sound like our National Anthem. Many fans questioned this.

The cars were on the track and NASCAR took them down pit road so they could check their speed. Pits were still wet and we were told there were 37 cars in the race. Ex driver, Rusty Wallace waved the green flag and they were racing. Hamlin spun his tires but by lap 5 he was leading the race. Jeff mentioned there was action all over the track and they were showing a lot of it. Then the rain came, and the red flag came out at lap 40. Because the rain did not stop, several hours later, the race was postponed until Sunday at 4pm Eastern.

Sunday broke sunny and clear and the race resumed on time. We were told that because the weather was sunny, there would be no competition caution. Because of this, they allowed all the cars to gas their cars before the race restarted. They once again explained the choose lane rule, then the green flew and they started racing on lap 46. On lap 51, Kyle Busch spun after being hit by Eric Jones when Jones came up the track. Then Jeff advised us we were listening to T.J. Majors, Joey Logano’s spotter on restart. Jeff also told us that the SHR cars were good on 1.5 mile tracks, but not doing as well on the short tracks. They continued to show us the competition all over the track. By lap 85, Blaney was leading. They updated us on the Toyota Top Performers. Blaney continued to put cars a lap down and there were only 21 cars on the lead lap when he won stage 1 easily.

Stage 2 started and Hamlin immediately took the lead. And the broadcast crew talked about Blaney having patience. They also told us that KyBu had the fastest pit stop all season. The broadcast crew kept updating us on back in the pack racing. They also mentioned that Hamlin was trying to figure out where Blaney was better on the track. Once again, it seems the drivers all calm down in Stage 2 and there are not as many incidents on the track. They gave us another update on KyBu by saying that he had only 1 win in his last 43 races even though he is the winningest driver in the last decade. Jeff mentioned that Blaney was building up quite a lead and that he was moving through the lapped traffic very well. They then did a short segment of miscellaneous radio talk. Very interesting. Cody Ware spun with 20 laps to go in Stage 2 and a caution came out. Another caution came out with 8 to go in the stage. Mike mentioned there was a lot of contact but that is the way short track racing is. Blaney won Stage 2.

Stage 3 began and the lineup was mixed up because some drivers chose not to pit. There was much discussion about this. On lap 277, there was a caution and Jeff mentioned that there was lots of action on the track, but very little patience. Caution came out again on 290 and Larry Mac talked about how cars should need tires again so pits might get busy. After the restart, there came another caution when KyBusch spun. The cautions were now coming often and many cars were getting a lot of dings and dents on them. By this time, Logano was up to 2nd and they talked about how loose Blaney was. Jamie reported from the pits that Bowman had a bad vibration in the corners. Jeff mentioned this could be a loose tire. The cameras followed him a bit and the booth crew agreed he had a problem. Another caution with 128 laps to go and we were told there had been 7 so far in this final stage. Shortly thereafter, there was a really bad crash involving 15 cars and this one brought out the red flag. Suarez’s car was on fire and some of the others involved in this crash were Keselowski, Preece, Bowman, Jones, Custer, KyBusch, Haley, Ware and a few others. There had been 14 cautions so far in this race. Jamie talked to Suarez and Brad K after the crash. Clint told us this was happening out of desperation and because it was now money time. They went back to the yellow flag with 113 laps to go. It was still green with 104 laps to go. We were shown a fantastic save by Truex after being bumped by Logano. There was lots of rubbing now, and that was okay as Rubbin’ is Racin’ in a lot of fans minds. Cars out front were getting a bit of a lead and we had 52 straight green laps and they mentioned this was the longest green lap run so far in this race.

Another caution came shortly thereafter when Briscoe spun and we were told this should be the last pit stop for everyone. Unfortunately, Blaney not only got a penalty for taking equipment out of the pits, but lost all chance of winning the race during his stop. Jeff told us that Hamlin had the fastest pit stop this time. Truex took the lead and there was excitement in the booth as they talked about how to get it done near the end of the race. Mike gave us a recap of the top 6 cars. When the checkered flag came out, it was Truex who got there first, followed by Elliot, Hamlin, Byron and Larson. As Truex did his burnout, it appeared something came out of the car and the fellas in the booth chuckled about it, but nothing else was ever mentioned about it, and we never found out what it was. Truex did give his checkered flag to a fan, as has been the custom of most drivers since Blaney started doing that last year. They advised us that out of 500 laps, JGR cars had led 300 laps and Hamlin led 274 of those. The Toyotas were strong in this race

Overall, the broadcasters in the booth and on pit road did a good job. I think I would have to give them a B time because there are still several things that I saw that were left unanswered. I still feel they are at times biased, not only with drivers, but with car brands.