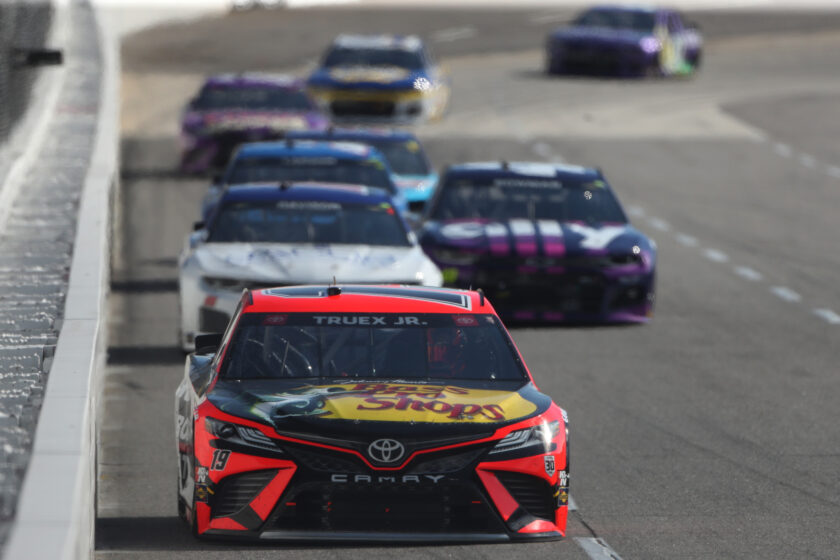 Martinsville weekend under the lights are over, not that it wasn’t to much of under the lights, Mother Nature made sure of that. I’m not a big fan of night-races, mostly due to the time-zone I’m in. When Mother Nature steps in it’s even worse. A late 8:pm eastern time green flag makes it 2:am here and delays for rain and track-drying forces most of us here in Europe to pack it in.

We finally got to see some Xfinity racing Friday night with a lot of action on the track. Some of the favorites found them self in early troubles one was AJ Allmendinger, one of the four driver qualified Dash 4 Cash price money. Allmendinger had a mechanical issue with the suspension on the car, and could never recover. Jeb Burton also found him self in trouble after getting penalized by NASCAR for laying back coming up to the choose-cone. By the end of stage 1 it was Noah Gragson who took the green white checkered flag.

Some good racing at the start of Stage 2 with the lead changing between a couple of different drivers. And then the rain came, and that was that for the night! Fast forwards to Sunday Noon, rain is gone and so was the little rubber that was on the track from Friday night. With the Sun out, completely different track conditions for the restart of the race. Again good racing at the restart of the race for about 15 laps until the #92 had a tire down and spun out. Daniel Hemric held on to the lead on the restart and won the stage.

Tommy Joe Martins had the lead on the restart, after a little pit strategy, with Josh Berry who had been running upfront for most of the race on his outside. Josh Berry hade fresh tires and a fast race car and took the lead. By the end of the day Berry stayed up front and with about 30 to go took back the lead from Ty Gibbs and would win the race with Noah Gragson second and Daniel Hemric third. JGR team-mates Ty Gibbs and Brandon Jones rounded up the top five. Small note here; JGR and JRM both hade all four driver inside top ten this time!! So the shout out this week have to go to AJ Allmendinger and his #16 team for fighting all day to repair the race car and Allmendinger coming back from two laps down to salvage a top 15.

Joey Logano had pole in the Cup race with Denny Hamlin on the outside at the start of the race. Logano took the lead but got passed by Hamlin after a few laps. Denny Hamlin held on to the lead up until lap 37 when Ryan Preece spun in turn#4 bringing out the caution. And then the rain came. NASCAR finally hade to postponed the race until Sunday, after the Xfinity. and I was off to bed.

Before the restart on Sunday afternoon NASCAR called off the competition caution, and teams where allowed to top off the fuel and adjust the air-pressures in the tires of there cars. After that teams where good to go to the stage break. Denny Hamlin took the lead on the restart and for the shorter run Hamlin was fast but on the longer run Ryan Blaney had the best car and won stage 1.

On the start of stage 2 Denny Hamlin re-gain the lead but after 34 laps Ryan Blaney took back the lead, and held on during a long green flag run. Blaney won stage 2 after surviving a couple of restarts near the end of the stag. Close racing not only up front but all over the place for every spot in the running order.

For the start of the final stage and due to the cautions near the end of stage 2 there was some mix-up in the running order. Past the half way point drivers most have felt it was time. With that there was very little give and mostly take, and with that the cautions where coming, a few different leaders as well. After we had a Martinsville “Big One” when Chris Buescher and Kyle Busch got together and spun in front of the field, we got two longer runs to finish up the day. On the money-stop, at lap 454 after Chase Briscoe had spun in turn #3, Ryan Blaney who had been running strong most of the day, run over the air-hose, and had to start at the back.

By the end of the day we got to see some GREAT Martinsville racing when Martin Truex, Jr chased down Denny Hamlin and held of Chase Elliott for the win. HMS-team mates William Byron and Kyle Larson rounding up top five. Shout out to Tyler Reddick P.8 after starting at the back due to inspection issues. JJ Yeley took the lead in the not so glamorous Fastest Man on Pit-road standing after having 3 speeding penalties this weekend!