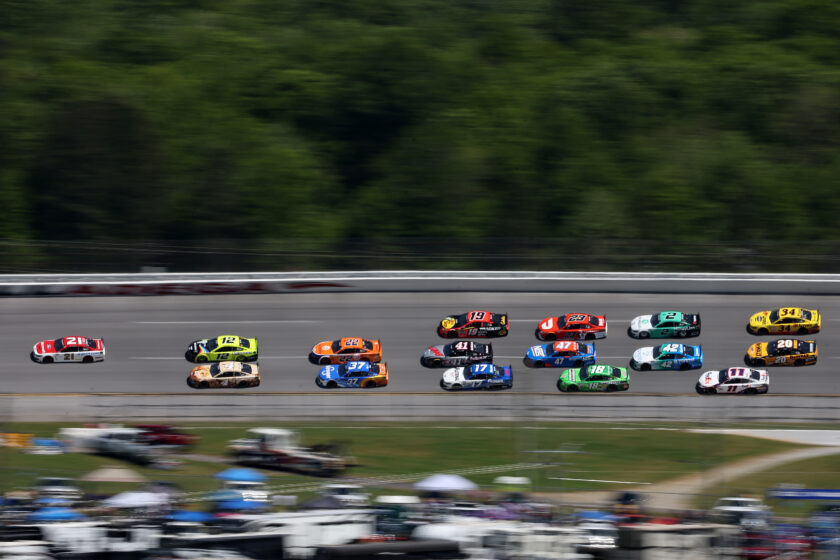 The Invocation was good and our National Anthem was great!

The line-up was given in the usual way of announcing the first few rows and then we would have to follow the scroll at the bottom for the rest of the line-up. Don’t they realize there are young fans, which are future fans, who would love to hear their favorite driver’s name announced no matter where he starts? Larry Mc talked about how the draft and fuel usage worked. Regan told us we usually had surprise winners at superspeedways and how McDowell won at Daytona. Jamie talked a little about Chase Elliot. We then saw the promotion for the Dog Brew contest. That was interesting.

Stage 1 – Hamlin and Logano started on the front row. The pace car was a 2021 electric Mustang Mach E. We were told that all Toyotas except KyBu was starting at back due to unapproved modifications between front and back window. During the first lap, the booth was quiet and just the sound of the cars as they went around was beautiful. Shortly after, Larson was running hot and he dropped back to pit. Jeff told us the drivers were getting aggressive already and had started bump drafting. Mike then said there were 7 cars in a row on the outside by lap 4. Clint mentioned there were not as many Toyotas as there were other makes in the race. Larson came back on the track and Clint said one needed to survive the race to get to the end of it. Larson started smoking and blew up on lap 8 and retired behind the wall.

There was a competition caution on Lap 25 and as he was leaving the pits, Harrison Burton took his gas can with him, thus a penalty. We were told this was his first Cup race. It was the first time we had even heard he was in the race. Truex was penalized for entering the pits too fast and Preece was penalized for crew over the wall too soon. Hamlin was constantly blocking while leading. It seemed much easier to push other cars if you were running the outside. About that time we were told that it had been mandated that all cars have slip tape on the back of the car so when someone did bump draft, they would not stay hooked up. I had never heard of slip tape before. That made a lot of sense to me, but I am not sure how the drivers felt about it. They talked about Gase’s paint scheme and how it was a tribute to Davey Allison in a promotion to get people to donate organs, as Davey had done. After that, they thoroughly explained what chain pushing was and how it could be good – or bad. At the end of stage one, Logano was turned by Hamlin after Hamlin was hit from behind by Stenhouse. Logano went up in the air for quite a ways and then when he came down, he rolled and then slide quite a ways and hit several cars which were damaged. Since this was end of stage, DiBenedetto took the green and white checkered flag as the winner of Stage 1. Me? I took a break and ate a chocolate Dale Earnhardt, Jr ice cream sandwich I discovered last week. Supposed to have vanilla wafer outer but seemed more like cake.

Stage 2 – Elliot was out of pits first so he started on pole. Again, they ran the first lap without talking and I liked that. Sometimes, other than the ‘Crank It Up’ segment, I wish we had more laps like that. I love hearing the cars without chatter in booth. However, I noticed that they seem to be taking more commercial breaks than normal. Anyone else have thoughts on this? One of the commercials was for the 2021 Mustang and frankly, I do not like the looks of it. All went well and just before halfway, the Chevys lined up and started their green flag pit stops. Fords were pitting together and everyone was taking just 2 tires. As pit stops continued, we were told Suarez was too fast entering and Elliot had a very slow pit stop. Toyotas were the last to pit and further penalties were issued. Harvick, Buescher and Hamlin all were speeding so they had to come back and serve their penalty. Hamlin went a lap down on this one. There was a caution for KuBusch as he had an oil line problem which resulted in a fire in pits. Chastain got the free pass on this caution. We saw a nice promotion about NASCAR supporting Boys and Girls Clubs and then were told Harvick’s crew was over the wall too soon so he got another penalty. During this race, I kept an eye on the leader board for Briscoe. He was always somewhere between 6th and 10th up to this point. For those of you who do not know this, I have been a Tony Stewart fan from back in the days when he raced open wheel and through his NASCAR racing, so do watch his cars and drivers more than I do others. They talked to Brad’s spotter, Coleman Pressley, and this was good. Jeff told us Coleman was one of the best spotters in NASCAR. KyBu had a great save after a DiBenedetto block. Mike told us there was usually a mix of favorites and surprise winners at Talladega and Daytona each year. Hey, Mike! Even surprise winners are someone’s favorite driver. Please make note of this, thank you. Wallace was blocking a lot while leading and he went on to win stage 2. There was a caution on final lap of stage when Truex got into Hamlin.

At the start of Stage 3, we were told there were 33 cars on the lead lap and Blaney was the leader at this time. They said Bowman’s time for repairing his car had expired so he had gone to the garage. Strange thing is they had not told us what had happened to Bowman. There was a big piece of debris on Blaney’s nose and they told us it was the backing from the bear bond. He was not getting hot right away so he stayed out front for a few laps, but finally had to give way to Almirola so he could pull up behind very close to him so it would come off. They later showed us how it had kind of rolled/blew off pit road and got into Blaney’s path and up onto his radiator opening. We had another ‘Crank It Up’ on lap 138. Sounds from this are always nice. Then they talked about how Almirola was the only one who had to run wide open since he was leading and was using more gas, while everyone else did not have to run at full speed, therefore saving gas. It was all follow the leader until 43 laps to go when a second line started forming up top. We knew it was going to get crazy now. Larry Mc told us the pit window was opening up with 40 to go and teams were starting to line up so car makes could pit together. Fords started pitting with 30 to go. Briscoe was 10th at this time. Then there was a caution for Houff. Larry Mc told us about past trends for cautions at the track and that all cars were okay now on fuel. We were told by Mike that Talladega had produced 11 first time NASCAR winners. Clint talked about blocking and said we were not through with cautions. Larry Mc had said the average caution was with 3 laps to go.

They restarted with 12 laps to go. Preece was penalized because his crew was over the wall too soon. DiBenedetto took the lead with 9 laps to go. Truex was slowly going to the back due to a tire problem. He was trying to ride it out, but caution came with 4 to go. KyBu and Wallace were the only 2 cars to pit. They mentioned we would be in Kansas next week and that this race was going to a G/W/C finish. They showed us a picture of the #3 Wrangler Monte Carlo Aero Coupe where a side back window was added so they could compete with the Fords when Bill Elliot was so dominate in his Thunderbird. DiBenedetto was leading and went up top to block Blaney so Kez took the lead. There was a big crash further back and the caution came and Kez was declared the winner. Jamie interviewed DiBenedetto and he was graceful, but disappointed. Byron was 2nd, McDowell 3rd, Harvick 4th and Grala was 5th. All but Bryon were interviewed; but they did tell us that this was Byron’s 8th top 10 finish which was the best of any Hendrick driver in 7 years.

This was a good broadcast and everyone did a good job on their portions of it. I think I will give them a B+ because I feel they could have done several things better.

Thank you for reading. Your comments and thoughts will be much appreciated. Stay safe.