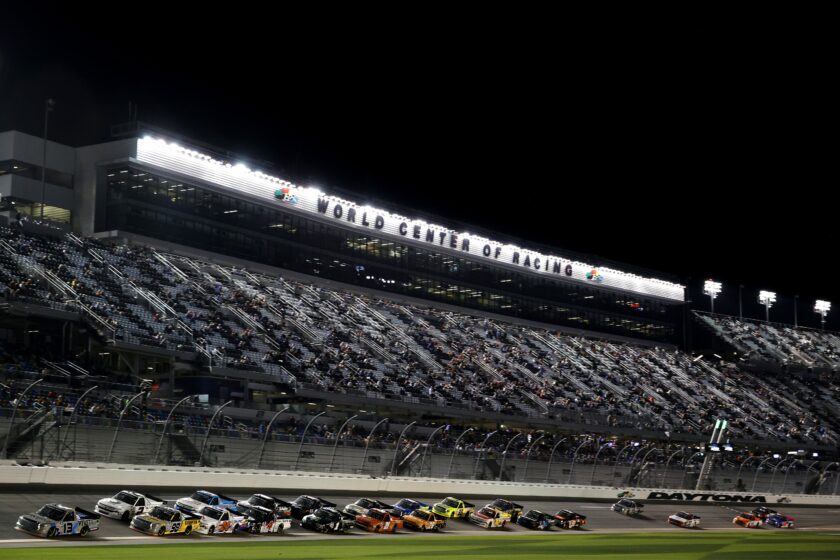 2021 is here and with that a new season of racing and also a few thing to look forward to. With the added road courses and a mix and some new to NASCAR tracks, this promises to be, from what I can see, going to be an exciting year. If the Covid-19 situation don’t shut the society and Racing down completely.

Racing started a few weeks back with the Rolex 24 hours at Daytona with some good racing even if I find it a bit hard to follow with the different classes running around track and with a TV coverage that is what it is and not as extensive as a normal NASCAR race!

So this year the Speed weeks was meant to be only one week. However due to the Covid-19 situation  in California and the decision to not race at Auto Club Speedway, made it back to two Speed Weeks, kind of. The speed weeks racing started up with the Busch Clash on Tuesday at the Daytona road course. We know from last year that racing on the Daytona Road Course with Cup cars can be quite good, so I’m looking forward to this weekend when all three series will run the Daytona Road!

With 44 cars entered for Daytona 500 this year and 40 spots on the grid the excitement for me was who’s going to make it and  who  has to go home. This year, Ryan Preece and David Ragan made it on time so no surprise there, JTG – Daugherty Racing and Front Row Racing has been the two strongest of the “smaller budget” teams.  In the Duel 1 Ty Dillon needed to pass Ryan Preece in order to advance into the 500 on Sunday unfortunately Ty Dillon didn’t quite get there and was sent back home due to slower qualifying time than Austin Cindric and Kaz Grala In Duel 2 no one of the non charter cars came close to David Ragan when only Kaz Grala was on the lead lap and the rest of the non charter cars where laps down

In Trucks there was 46 trucks entered for 36 spots making the quals interesting to watch. Well Johnny Sauter tock pool with Sheldon Creed on the outside, Jennifer Jo Cobb surprised us with a solid lap that put her in p.16 on the grid and ended up with a top 20 in the race finishing on the lead lap. Also was happy to see David Gilliland racing in one of his trucks and a father son battle is always nice to see. Unfortunately fore Todd Gilliland and his fans the young Gilliland got put 4 wide and turned around in front of the field on lap 69 and later on another accident a few laps later ended his day.

At the end of the race Ben Rhodes in his Bombardier Lear Jet 75 sponsored truck, came flying by Cory Roper to grab the win and Roper took a impressive third just after a very happy Jordan Anderson who came in second for the second strait year!  Forth and fifth place to team mates Ryan Truex and Carson Hocevar, driving for Al Niece who got a strong line up of drivers and fast trucks this year as Brett Moffitt join the Niece organisation making the Truck series very interesting to watch this year!

What a difference a day make! On Friday we got to see a very happy Jordan Anderson after finishing second in the truck race on Saturday disaster stuck him when the Xfinity qualifying was canceled, due to rain, leaving Jordan Anderson and his startup team outside the grid with no owners points to fall back on. This means IF there are full fields in the NXS races, the next chance for Anderson and the other start up teams to qualify for a Xfinity race will be mid May!

With the field lining up per the rule book it was Austin Cindric on pool and Justin Allgaier outside. The race it self was more or less quite a typical “plate-race” with building of runs and blocking and more than a few scary incidents that easily could have been so much worse. At the end of the race Austin Cindric started of this year where he left of last year and won the race Brett Moffit took second just in front of the Burton cousins  with Harrison in third and Jeb fourth and AJ Allmendinger fifth. Shout out to Brandon Gdovic in eight driving for Sam Hunt

So with the field set and the unfortunate teams gone home on Sunday it was finally time for the Daytona 500 and some good and close Super Speedway racing. The absolute best thing with “plate racing” is IF your in it you CAN win it But to get there at the end and be in the position to win takes a lot more than most people can understand. This time it was Michael McDowell Who was in the right place at the right time to get his first win and the third win for Front Row Motorsports.

The little team that could now have 19 out of 28 top tens on Super Speedways  so over the years Front Row had made a very good Super Speedway program, as well as during last year has taken a step forward. I’m not going to say to much more on the Great American race other than a little shout out to Spire Motorsports duo Jamie McMurray and Corey LaJoie, P. 8 and 9.

With the Fontana race out we got some fantastic racing in all three NASCAR series on the Daytona International Speedway Road Course. First off was the Trucks as usual on Friday night With the field set by NASCARs Metric Qualifying 40 trucks made the race and two teams withdrew. Ben Roades started on pol position with Ryan Truex on the outside John Hunter Nemechek took the lead on the first lap but Ben Roads manage to stay near the front while Ryan Truex had an eventful day and ended up thee laps down.

Cautions filled the race with 39,2 % of the race run under yellow flag condition. Also instead of the advertised 159 miles we got 184 miles and multiple attempts at NASCAR overtime  the race took almost three hours to complete. I made the right call to go to bed after stage two and watch the rest of the race Saturday morning. Well at the end of it Ben Rhodes made it two in a row with Sheldon Creed in second and John Hunter Nemechek in third and Todd Gilliland and Riley Herbst rounding up top five. Shout out to Timmy Hill P.9 this time

In the Xfinity race we had a full field lined by the NASCAR metric line up and 4 temas sent home or maybe I should say withdrew from the event, the big question seams to be would it be Austin Cindric or AJ Allmendinger who would take the win or maybe Brett Moffitt. The answer was a little bit unexpected Ty Gibbs!! I know from watching a  few  ARCA races last year Grandson of Joe Gibbs was quite good and the JGR cars are very strong but young Gibbs made no mistakes in the race and took an Impressive win. Some of you may argue that Cindrics car was damage from the earlier incident with AJ Allmandinger, BTW that incident seams a bit unnecessary.

When the dust hade settle Ty Gibbs won the race and Austin Cindric in second a good day for JGR with there four driver inside top six and Jeb Burton best of the Chevys with a P.5 finish. Shout out to Brandon Brown P8 and Jeremy Clements P10  From what we seen so far Xfinity series should be interesting to follow this year for an old Ward Burton fan like me with his son Jeb in a race car that are capable to run up front on regular bases.

Full field also in NASCAR Cup also this week and some great racing on the program Chase Elliott on pole last weeks winner Michael McDowell on the outside. With McDowell having a tire going down coming up to the first corner Chase Elliott took the lead and was by far the fastest on track most of the day and led 44 laps total on the day. Chase Briscoe also hade trubbel along with many others including Kyle Busch mostly in the infield section after restarts. In the end of the day it was a few small mistakes by Elliott him self and a strange “rain” call by NASCAR Race control that eventually made ended his Road Course winning streak in Cup.

Instead Christopher Bell had a strong car and manage to pass Joey Logano with a couple of laps to go and held of Logano and Denny Hamlin for the win, making it three for three for the Toyotas this weekend. Michael McDowell manage to recover to an eight place finish making it Two top ten in a row for Front Row Motorsports. And also Two top tens in a row for Ryan Preece P.6 in the 500 and P9 this Sunday is good start to a season where Preece runs his #37 as an open car without sponsorship for a full season

We have hade a bunch of good races from Daytona during the two weeks and decent TV coverage where the highlight for me as far as the TV coverage was the Xfinity race with Tony Stewart in the booth  even if Fox made some mysterious calls showing in-car cams instead of overviewing the action on the track. Clint Bowyer also livens up the from last season a little dull booth, lets hope they can keep him at at a resonable level, so to speak..