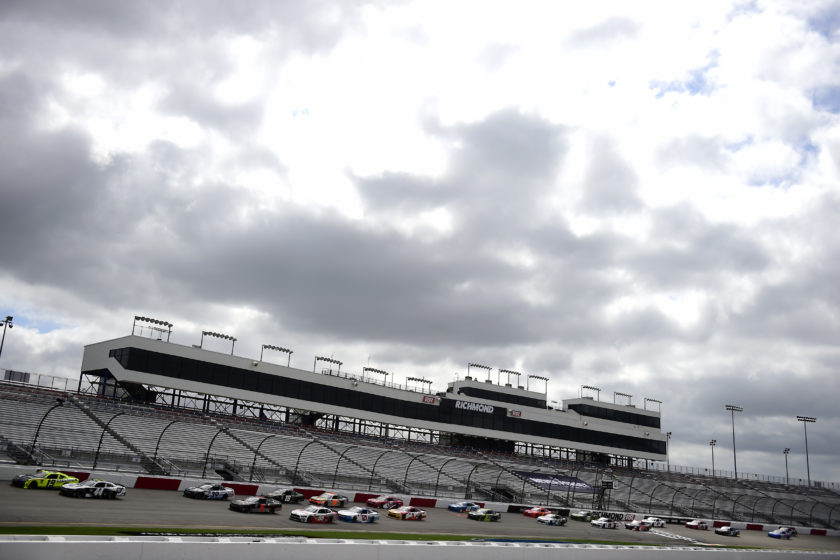 I was looking forward to the trucks’ return to Richmond. Last time they were here was September 2005 so the only ones who had raced there before in the Trucks were Matt Crafton and Johnny Sauter and  Sauter didn’t have too much luck back then, with only  100 laps in the books after a crash! This time the unluckiest one was Jennifer Jo Cobb, who was unable to take the green flag after the clutch let go in her truck.  Well, this time Johnny Sauter’s teammates took home a 1-2-3 with Grant Enfinger first followed by Matt Crafton and Ben Rhodes in third. Shout out to Codie Rohrbaugh, P6 and David Ragan, P7. This was maybe not the best Truck race I’ve seen but it was OK; maybe the best race of the weekend but it may very well be because I like the racing in the Truck Series.

Double header in NXS this weekend and Justin Allgaier won both of them, making up for some of the bad luck he had this season. Justin Haley came in second in race 1. Not even Kyle Busch in third had anything for the winner, Justin Allgaier. Again, Brett Moffitt was doing great in the #02 P6 this time in the first race!
In the second race Jeb Burton earned a solid second place finish after having right front wheel issues in race one. Ross Chastain in third was unable to do anything against the two strong JR Motorsports cars. Chastain has been running strong all season but without any wins yet! Shout out to Kaz Grala  in the #21, P9 in both races!

I really don’t know what to say about the Cup race, I’m sure there was a lot of good racing somewhere perhaps around mid-field; green-flag passes were up about 150% from last year’s snoozer. However once again NBC failed to deliver. Brad Keselowski led almost half of the race and won the race! Martin Truex Jr was second and Joey Logano third. Best of the “nonplay-offers” was Tyler Reddick just outside Top Ten with an eleventh place!

So what about Indy Car? Well Indy Car also had a double header at Mid-Ohio Sports Car Course, a nice track that I would have loved to ride a motorcycle on back in those days, but for the Indy Car races, well not that exciting. Seems to me the only way to beat the leader is by pit strategies. And when everything is decided in the Quals it doesn’t leave too much for the races. Will Power took pole in the first race and led 66 of the 75 laps and no cautions to mix up the field, he won with a margin of over seven seconds. From a Swedish standpoint, Felix Rosenqvist came in P6 and Marcus Ericsson managed to drive up to P15 after starting way back.

In the Quals for race two it had been raining all morning and a wet track caused a lot of slipping and sliding and also some spins that left Colton Herta on pole for the race, which was run under dry conditions. Herta won the race after leading 57 of the 75 laps. Unfortunately, Felix Rosenqvist and the Spaniard Alex Palou were taken out on the first lap in turn four so this time it was Marcus Ericsson who saved the Swedish honor with a P5 after starting back at 15th place. Marcus Ericsson needs to qualify a bit better to make it onto the podium.