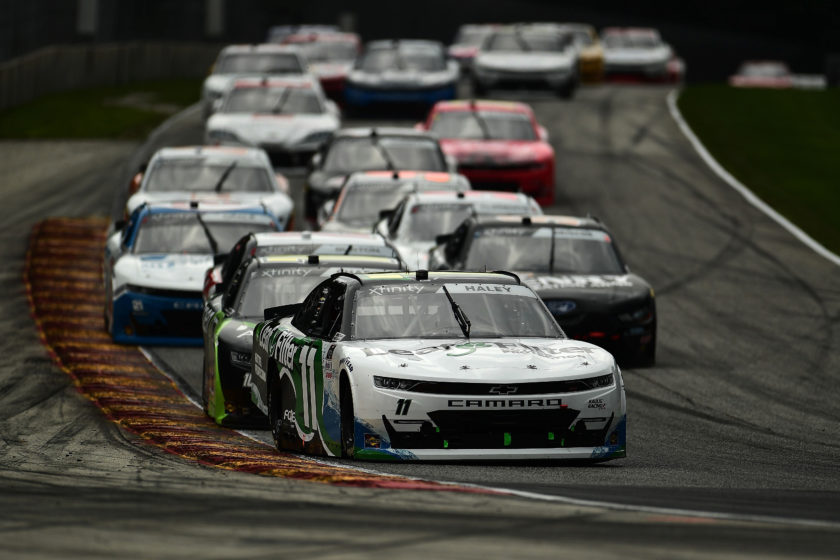 Coming into this weekend NASCAR had some new rules implemented in each of the top three series, and we saw two of them in use this weekend. First the “choose cone rule”, on how to line up the field on restarts and also new procedures on how to perform pit stops on stand-alone events in NXS and NGROTS races. For next week’s races on the Daytona road course we will have a new system on how to set the starting lineup, where NASCAR will reward both season-long and single-race performance to determine the lineup and pit selection, using owner points position and the finish and fastest lap from the most recently completed race. That metric will be weighted and averaged to establish the starting order. Points position will be weighted at 35%; finishing position at 50%; fastest race lap at 15%. We will see how this plays out and maybe get to know how this formula is set up to establish a comparable key value!
We had another packed weekend of NASCAR racing this past weekend, starting off with Trucks on Friday night with a 100-lapper at the 2-mile Michigan International Speedway followed by the NXS race at Road America and a double header in Cup at MIS on Saturday and Sunday!

Trucks at the track

Normally the Trucks offer good exciting racing however. This time it didn’t take long before the first yellow flag flew over an accident in turn 4, at lap 4… the first of a night which would be plagued cautions!! With 11 cautions for 51 of the 107 laps, 47.7 %…
that’s way too much! Grant Enfinger and Austin Hill seemed to have the best trucks. On the second overtime restart Grant Enfinger was involved in a three-truck collision at the front of the field involving Austin Hill and John Hunter Nemechek. Zane Smith was able to make it through the mess to take the checkers before Christian Eckes and Tanner Gray. Tyler Ankrum and Todd Gilliland rounded up the top five!! Top ten finishes for Parker Klingerman and Sprint Car racing star David Gravel.

Road America has been one of my absolute favorite courses ever since I first started watching American Racing back in 1992 when Stefan Johansson drove in CART. We have been blessed with a bunch of great Xfinity races from Elk Hart Lake all the way from back in 2010 when Carl Edwards won the race! However, that was not the first time NASCAR held a race at Road America. The first NASCAR race was held in 1956 and was won by Tim Flock.
This time Austin Cindric took the lead on the restart with three laps remaining, having to hold off hard-charging A.J. Allmendinger and Chase Briscoe in third with Kaz Grala in fourth and Andy Lally in fifth. This was Austin Cindric’s fourth win in the last five races. He’s the 11th different Road America winner in the last 11 NXS races on the track.

Kevin Harvick had an impressive weekend with back to back wins on Saturday and Sunday for most of the time on both days, battling with Denny Hamlin, Brad Keselowski and Ryan Blaney, up until Brad Keselowski unfortunately took out his teammate Ryan Blaney on Sunday’s lap 96 when going for the lead. In the end Kevin Harvick had by far the best car that not only was trimmed out to be fast in clean air but also drivable enough to navigate through traffic when not up front! With the invert of the top 20 on Sunday, Harvick started mid pack but still manage to lead 90 of the 156 laps and with 92 laps lead on Saturday Kevin Harvick had lead 182 of the weekends 312 laps in total.

Not too much more to say! One small note or two about the weekend! First, this stage racing doesn’t work too well on Road courses especially with the new pit rules NASCAR has implemented for stand-alone events. AND I’m still not too fond of this type of racing with the rules package we have now. Too much drafting and blocking and too little horsepower !!

Well, off to Daytona for racing on the Road Course and another exciting racing weekend with all three series. Jayski has the details here

That all from me but remember to Take Care and Stay Safe!