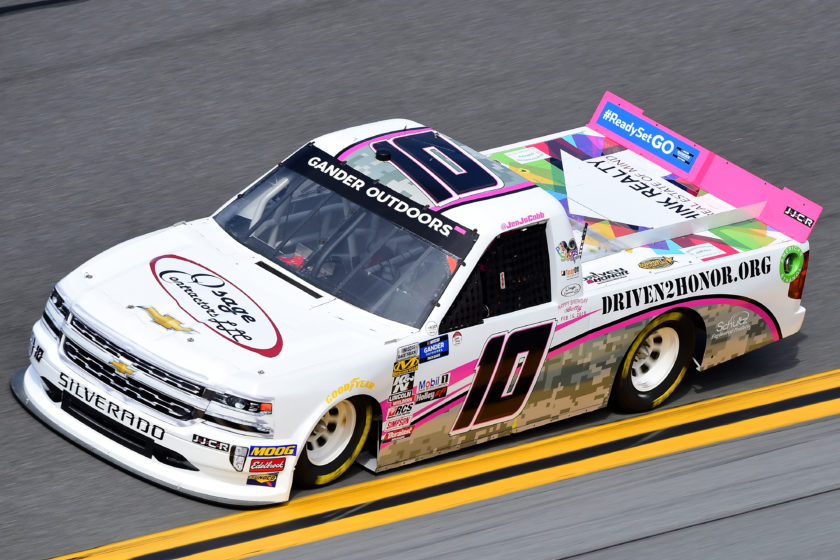 Last week was filled with racing in lots of different classes, with Indy 500 practices starting as well as qualifying but I’m going to start off with a few words on the ARCA race!  Normally we don’t get the ARCA races here in Sweden, but I was fortunate to find it on YouTube.  Some good racing between Michael Self and Ty Gibbs for the lead during the race with Michael Self taking the win. Also a shout out to Tylor Gray, in fourth place, Tylor, Truck Series regular Tanner Gray’s younger brother is only 15 years old and only got a few starts in the ARCA series driving for DGR Crosley.

After a long delay for thunder the NXS race finally got on the way! On the pace laps NASCAR change the Track condition from wet to damp leaving the teams to decide what type of tire to start the race on, rain tires or slicks. Some teams may have misunderstood the call, believing rain tires were mandated! Lots of good racing with some of the best on road courses! In the end, it was Austin Cindric who had a fast car and manage to maneuver through the mess caused by a couple of slower cars with worn tires on the late race restarts!  Shout out this time for Andy Lally, p5, Jeremy Clements, p6, and Myatt Snider finishing in tenth!!

Early Sunday morning Mike Harmon’s 47 team got their trailer and racecar stolen along with most of their equipment!

Mike Harmon Racing later put up a $5000 reward for the recovery of the stolen equipment. Truck, trailer and various items are set up with various tracking devices. The Truck was last seen going south heading back to Florida!!

Sunday’s Truck race was a bit entertaining with fighting for positions and the threat of rain and lightning in the area. This week again GMS had a bunch of fast Trucks with most of them running near the front, but in the end, it was Sheldon Creed who came home with the win before Brett Moffitt with Raphael Lessard, Matt Crafton, and Austin Hill. Shout out to Jennifer Jo Cobb; 200 Truck starts and also thanks to FOX Sports1 for giving her some much needed air time!

I was looking forward to seeing the Cup cars hit the track, but the Cup race was perhaps the least exciting of the weekend’s races on the Daytona Road Course, although a quick look at the Green Flag Pass data suggests there were a lot more passes than NBC was able to cover!! In the end, no one could catch Chase Elliott, not even Denny Hamlin or Martin Truex Jr had anything for the #9 car after a late restart due to Kyle Busch’s misfortune! Shout out for Kaz Grala, finishing p7 in his first Cup race, subbing for Austin Dillon who was out with Covid 19! Maybe he should have been a bit more careful. All in all, a good weekend for us race fans with some great racing. Oh, almost forgot the lineup for the Indy 500 has been set this weekend.

Next weekend is going to be a very busy with a LOT of racing; Trucks and doubleheaders in Xfinity AND Cup as well as the 104th running of the Indianapolis 500! (link to schedule when published)

That’s it for now!