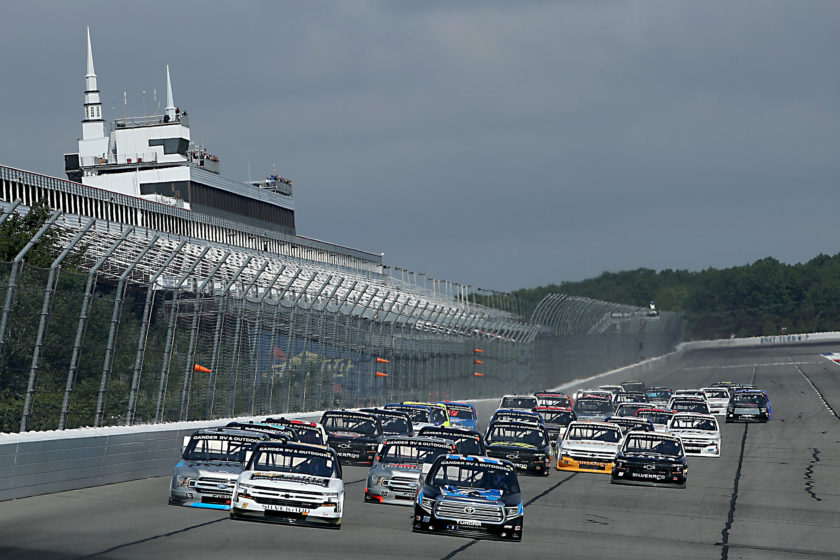 There’ something about the Stock Car racing at Pocono that I always liked and this year the racing was the best its been in many years!! Four great races in one weekend is almost to much to take in. I never thought that Mother Natur would let us get all four races in but somehow She did with some delays, so thanks for that!!

The ARCA Race on Friday

On Friday night the ARCA kicked of the weekend with some descent racing where we saw, the grand son of coach Gibbs, Ty Gibbs take home a dominant win after taking the lead on lab 26 of 80 and never looked back! High notes goes to Haillie Deegan doing the best and finishing on the lead lap while her car seems to fade a bit on the longer runs!! Low notes goes to Thad Moffitt, the King’s grand son hade no luck at all when the engine expired on the first lap.

Saturday with rain and some racing

Saturday did not start out to well due to rain and thunder and that forced NASCAR to postpone the Truck race until Sunday morning! Later on after a few lightning strikes, the Cup cars where able to take to the track with #10 of Aric Almirola on pole! Lots of great racing and excitement all day, and at the end of the day it was a great call by Rodney Childers on when to pit that got Kevin Harvick the win in the end! Good to see Christopher Bell, Michael McDowell and Chris Buescher inside top ten!

Plenty of racing at Sunday

On Sunday morning (afternoon here in Sweden) the Trucks kicked off the action on Pocono or “the Tricky Triangle” with a short but caution filled race which is to bad, because the Truck Series have provided us with good racing all year long. When their actually where green flag racing, it was very good, but running 48,3% of 60 laps under caution is way to much! But at the end, Brandon Jones was able to win, followed bye Austin Hill and Sheldon Creed!

In the NXS race, we again saw a bit too many cautions but also some fantastic racing! Chase Briscoe took home the checked flag after doing battle with Ross Chastain on the last laps! Good finishes for Jeremy Clements and Myatt Snider inside the top five, and a top ten for Jesse Little driving the Johnny Davis #4!

Who should have thought we get the whole Cup race in after looking at the weather forecast, but we did. When the dust had settled, Danny Hamlin took the win before Kevin Harvick and Erik Jones – who drove up through the field after starting at the back and going into a backup car after crashing out early on Saturday.

I have to say that NASCAR have hit it with the invert – this makes the racing more exciting! Lets hope this spills over to this weekend at legendary Indianapolis due to the fact that there are some similarities in between the tracks!!