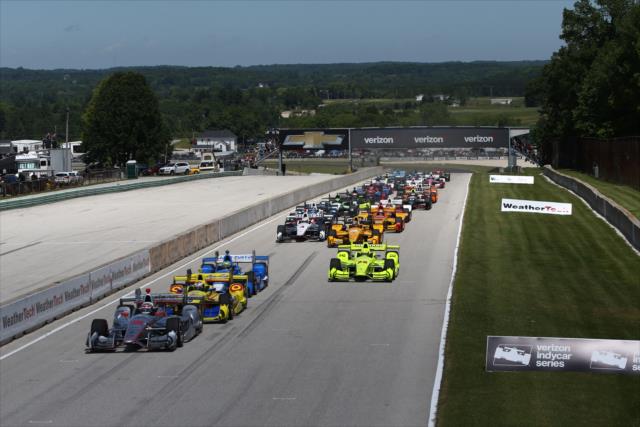 The Verizon IndyCar Series returned to Road America, for the first time since 2007. Road America is the setting for round nine of the IndyCar Series, the Kohler Grand Prix, a 50 lap 200-mile race. The road course is a beautiful 4.014-mile asphalt track located in wooded Elkhart Lake, Wisconsin, a tiny town with a population of 967. It is your typical rural America small town full of friendly “Folksy” people.

The track itself, is known as “America’s National Park of Speed” it’s the fastest road course in North America with 14 flowing corners and three long fast straight-aways, reaching a top speed of 185 Mph. Drivers say that it is very fast, technical and that they spend much of the lap looking for grip. It’s the kind of track that drivers have to pro-actively manage tires and fuel to win.

From a spectator perspective, the track has a few great corners from which to view racing. The famous Canada Corner is always action-packed and the high speed Carousel also offers some astonishing views. It’s a classic old school style road course similar to Watkins Glen & my home/favorite track Mid-Ohio. It is the kind of classic road course that this race nut loves. NBCSN reporter, Racer Magazine writer & all around race guru Robin Miller had this to say about Road America ” The best of road racing in North America.”

For the Kohler Grand Prix, Will Power took his 44th career pole and Scott Dixon lined up second on the front row. The parade lap started the way it always does with three-time Road America race winner, Mario Andretti taking some lucky Honda promotional winner out for a spin in a Honda two-seater IndyCar. (Every time I see this I secretly wish it was me.)

On the opening lap of the race, the cars made a beautiful grand stand start and got through the danger zone of turns 1,2, & 3 cleanly without any major incident. Will Power led the opening lap with Scott Dixon all over his rear wing. The bright yellow Clorox car of Dixon pushed Power to use more fuel and to wear his tires more quickly than usual.

Dixon is desperately trying to get back into the championship fight, that has been dominated by Simon Pagenaud and Team Penske. The race strategy of Scott Dixon and Chip Ganassi Racing is to get up front and stay there. The Ganassi camp is prepared to use his teammates to help make that happen.

On lap seven, Dixon experienced mechanical problems with his engine and had to pull off track. The team continued to work on the car in the garage, so they could squeeze out every possible point, but sadly it wasn’t to be. After his retirement Dixon had this to say: “We have a car that can win this race, and when we have a car this good we have to take advantage on days when Simon Pagenaud isn’t as good.”

At this point in the race Will Power seemed to hit his stride and get into a good rhythm. On lap 40-43 there was a caution flag due Conor Daly having a rear suspension failure. This bunched the field up making for an exciting seven-lap shootout. Tony Kanaan caught up with and reeled Will Power in, but there weren’t enough laps for him to make a pass. Will Power won the race leading all but four laps. Tony Kanaan was second and Ohioan Graham Rahal finished third.

After the race, Tony Kanaan said that IndyCar needs more events like Road America and Mid Ohio, where families can camp and bring their kids. I strongly agree. Family friendly race tracks widen the fan base and are simply good fun.

This got me to thinking of some other great road racing venues that could be added to the IndyCar Schedule like Virginia International Raceway, Lime Rock Park and Mazda Raceway Park at Laguna Seca (this track has an Indy Lights race but not an IndyCar race.) 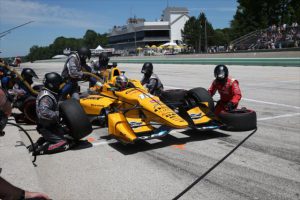 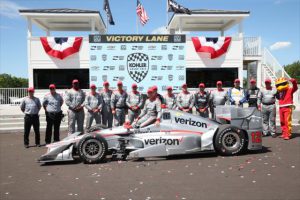 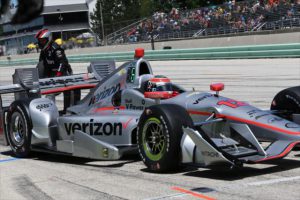 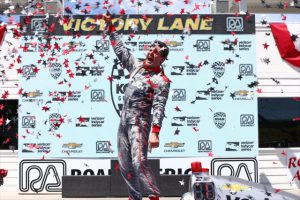 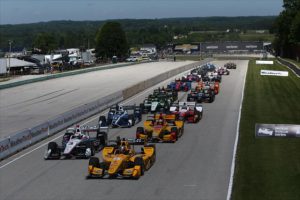