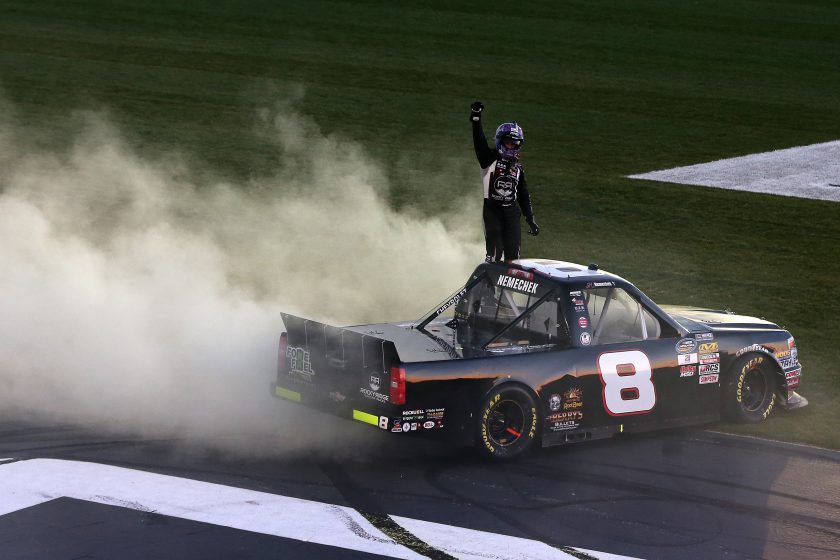 The young Mooresville, NC native is named after his Uncle, John Nemechek. Sadly, 27-year-old, John Nemechek was killed in a 1997, racing crash at Homestead-Miami Speedway, in what is now known as the NASCAR Camping World Truck Series. In 2002, five-year-old racing talent John Hunter began his road to NASCAR stardom by racing go-karts, quarter midgets and dirt bikes, like both his father and uncle before him.

In 2010, the teenage wheelman moved into stock car racing. By 2012, the 15-year-old Nemechek had become a Champion in the Allison Legacy Series winning 15 of the 18 races. In 2013, the teenage prodigy further progressed up the racing ladder into the NASCAR K&N Pro Series East.
In October of 2013, he was ready for his first NASCAR CWTS start in the Kroger 200 at Martinsville. In the #22 SWM-NEMCO Motorsports truck, co-owned by Sid Maudlin and his father. John Hunter finished a solid 16th after qualifying 30th.

In January of 2014, NEMCO Motorsports announced that Joe Nemechek and John Hunter Nemechek would share a truck. Joe, behind the wheel for the races on tracks larger than one mile, since John Hunter was too young to race on these tracks at only 17. (The minimum age to race on NASCAR tracks larger than one mile is 18.) During this season, John Hunter led his first laps in NASCAR CWTS competition leading a total of 53 laps and earning a total of $ 137,220.

In 2015, John Hunter ran 18 of the 23 NASCAR Camping World Truck Series races. On September 19, 2015, John Hunter Nemechek would get his first NASCAR Camping World Truck Series victory at the Chicagoland race, a piece of NASCAR history that I was lucky enough to have witnessed firsthand from the infield. After the race, John Hunter said “This is definitely a special moment, and I can’t thank these guys on the NEMCO Motorsports team enough. We work hard in the shop to put these Chevrolet trucks together, and we do the best we can. We’ve had a few close calls, but I can’t thank everyone enough.”

His father had this to say after the victory “He’s won his first truck race. I haven’t been able to win a NASCAR Camping World Truck Series race yet, and it’s his first of many to come. He’s such a talented driver. For what we’ve had to work with–he’s accomplished a lot. I am so proud of him because we have such a small group of guys on a very limited budget.”

Ironically, this victory came 16 years to the day after Joe Nemechek’s first Sprint Cup victory. 2015 was a stellar season for the small- budgeted family- owned NEMCO Motorsports. The team had one victory, led 61 laps, racked up eight top five’s & ten top ten’s, and made $460,734 in prize money. John Hunter was named a 2015-2016 NASCAR Next Driver and voted CWTS Most Popular Driver.

Early in the 2016 season, John Hunter Nemechek has already won a race, at 1.5 mile Atlanta Motor Speedway. I see this young racing talent winning at least one perhaps two Camping World Truck Series races this season. Both of his CWTS wins have come at 1.5 mile oval tracks. So look for him to do well at the next few races in Charlotte and Texas, as well as at Kentucky, Chicagoland and Las Vegas. Richard Childress has recently expressed interest in John Hunter -possibly having the younger Nemechek race for him in the Xfinity Series. I look forward to watching this NASCAR Next driver further develop and climb the racing ladder. I hope to watch him win for many years to come.