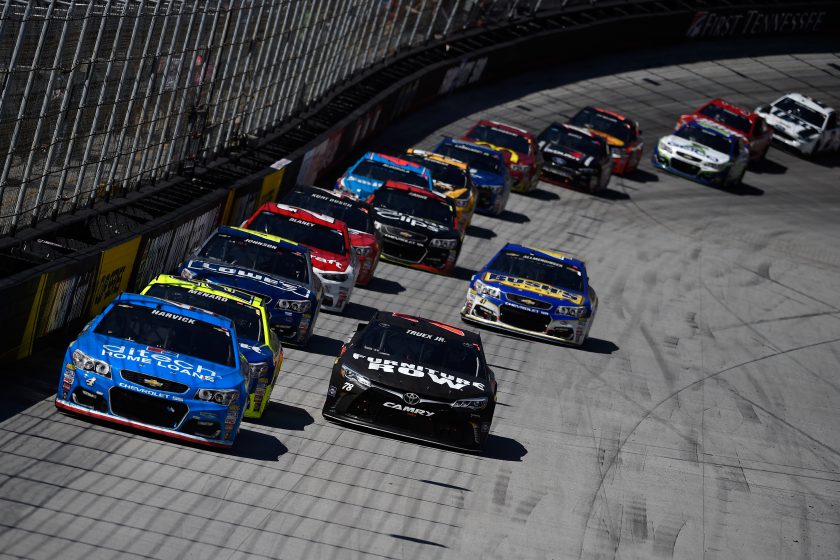 Once again, it was time for my favorite track of Bristol Motor Speedway last Sunday – or “The last Great Colosseum”. This short track was built in 1960 and NASCAR started race here in 1961. Its four turn concrete surface track is only 0.858 km (0.533 miles) long.

First, I must start to say that the Bristol track itself always is a memorable moment to watch races at. I love this little short track because you get it all here; tight and rough racing, action around the track at all times, drivers really shows their racing skills and you are able to witness it all from the stands. And one more important thing, intensity, intensity and even more intensity between the drivers. Doesn’t matter if you are on the lead lap or five laps behind, NASCAR drivers at Bristol will not give you anything for free – and that’s what I want to see as a NASCAR fan. Don’t you agree?

Hendrick Motorsports driver Dale Earnhardt Jr. early problem when the green flag waved. The #88 car didn’t get going as it supposed to and “junior nation” was freezing to ice (!) on the very first lap. It was an issue with the braking system that caused the engine to shut down. After hitting the pit road and falling two laps behind, Dale Jr’s rebound was remarkable to witness. After fighting for many laps to get the “lucky dog” (free pass of one lap) Dale.Jr managed to drive all the way up the second spot at the finish. This is exactly why I love NASCAR. The race isn’t over just because you get an early problem, as in so many other motorsports around the world.

Who will not remember Matt DiBenedetto’s best Sprint Cup race finish ever last Sunday at Bristol? Matt drove that #83 BK Racing Toyota like he has stolen it. You could early see that there was something really positive going on in that #83 team. Crew chief Gene Nead did all the right adjustments and calls for his driver. Driving in the top ten positions for longer periods, Matt ended up in a sensational sixth position. This is exactly what a smaller team like BK Racing needs to do – carry on fighting against the “big wolves” in Sprint Cup.

I think I wasn’t the only one that was surprised to see Front Row Motorsports #38 car with Landon Cassill at the wheel up front and leading laps. Crew chief Donnie Wingo did make some remarkable swings to put the #38 car up front and in top ten positions for longer runs. It didn’t really pay off in the end with a position 22 at the checkered flag, but Landon managed to lead 22 laps and got some valuable Tv-coverage for his sponsors. A good day for Front Row Motorsports.

Rookie of the year contender Chase Elliott (Hendrick Motorsports) impressed in his legendary #24 car. It’s not easy to compete against so many veterans at a track like Bristol. The kid got his dad’s (Bill Elliott) sensitive driving hands – no doubt about that. Chase did some excellent, tough, “slide jobs” against many of the veterans and that impressed me. Bristol is a track that the drivers really can show what they are made of and young Chase did pass the test with remarks. And yes, Chase did end up in position four at the end…

Well I normally don’t mention Danica Patrick in my articles, but here we go. The #10 Stewart-Haas team hasn’t had a good start of the 2016 season so far. There have been some bumps here and there and there have been some better chances to a good finish, but the #10 team has not yet closed the deal so far. Unfortunately, this was the case at Bristol also. But, at Bristol I saw something that I personally liked with Danica that day – she really put up a fight on the track. I’m recalling when Danica was about to get laped and she fought so hard to stay on the lead lap that the leader had to work for many, many laps just to get by her. She was up there in top ten mix for some times and had something good going on but it didn’t hold for 500 laps. Danica ended up in position 27.

I cannot end this article without mention our Food City 500 winner Carl Edwards. The Joe Gibbs Racing driver of the #19 Toyota was the pole sitter for this race. Leading 276 laps out of 500, Carl was putting up a tremendous display of strong racing. He was tested so many times at numerous restarts, but managed to get the lead every time. Carl and his #19 team, with crew chief Dave Rogers calling the shots from pit road, was ahead all competition in this race. I don’t think anyone would raise their eyebrows when I say that Carl Edwards was the rightful winner of this Spring Bristol race. It is always nice to see Carl doing his classic “backflip” from his car after winning a race. Now Carl is clinched for the (in)famous “the Chase” or playoffs or whatever NASCAR wants to call it. (JS)