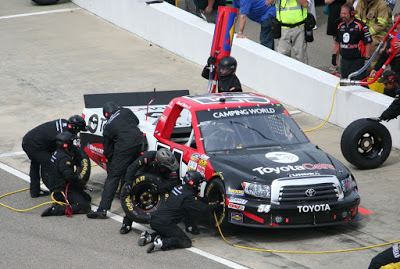 Wednesday July 22nd, its a beautiful sunny, lazy summer day in rural New Weston Ohio. The Eldora Speedway, owned by three time NASCAR champion Tony Stewart, is the setting for the 1-800-CAR-CASH  Mud Summer Classic. Eldora speedway is the only dirt track on the 2015 NASCAR calendar.

The Eldora Speedway is a half mile clay oval that was built in 1954. It is the self- proclaimed “World’s Greatest Dirt Track”, an idea that’s hard to argue. Eldora is a uniquely American, old-school dirt track that is a throwback to NASCAR’s grass roots history. The Camping World Truck Series only gets a few action-packed, mud-slinging hours of  practice, since the Mud Summer Classic is held on one day rather than a whole weekend. Eric Jones led the first of the two practice sessions with a speed of 89.454 miles per hour. Tyler Reddick took the second  with a speed of 89.264 MPH.

After practice sessions, track workers went to work watering the track down, grading, and driving on it with various vehicles to prepare for qualifying. Of the 34 trucks entered , only 32 drivers can qualify for the feature race. Drivers know they must “Go, or Go Home”. As the track “rubbers in” and gets faster, the line moves closer to the wall. The clay hardens and you can see a glossy sheen on it.

Underdog, fan-favorite, first-time NASCAR Camping World Truck Series starter Bobby Pierce set the pole. Pierce,  is a dirt track specialist driving for the Mittler Brothers, a small under-funded team. The Mittler Brothers, who have raced in the truck series since its inception, have had little success in their 200 plus starts. After qualifying  there are five ten- lap heat races, and a last chance race to set the final grid for the feature race.

The mudslinging, throwing- it- sideways, panel -bashing race was action-packed and caution laden. The 150-lap race was run in three 50-lap segments. For much of the race, pole sitter Bobby Pierce and Christopher Bell dueled. Pierce led 39 laps, Christopher Bell led 106 of the 154 lap race. The race was extended to finish under green-white-checkers.

Bell who won in only his third Camping World Truck Series start for Kyle Busch Motorsports stated: “This is unbelievable!  I’ve been coming here quite a few times and if you would have told me two years ago that my first win at Eldora was going to be in a truck, I would have told you that you’re crazy.” Christopher Bell won with the number 54 Toyota Tundra – the same number that Darell “Bubba” Wallace won the 2014 Mud Summer classic for Kyle Busch Motorsports.

The Eldora race is always a much-anticipated event, and the 3rd annual Mud Summer classic delivered a thrilling race to the 17,000 plus fans. The large crowd  at the track made Eldora Speedway the largest city in Darke county Ohio on that evening.

Racing fans from any state or country will enjoy the action at the Mud Summer Classic at Eldora Speedway in western Ohio. If you can make it over from Europe this is a highly recommended and unique NASCAR event.
____________
Complete results from Eldora here