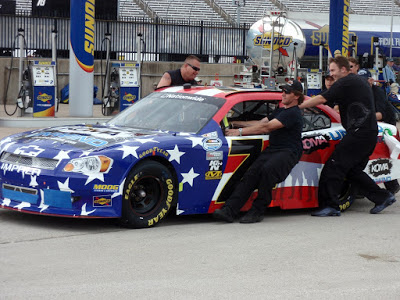 It’s time to start up a new article series here at PTR. I hope that you have read the introduction in a previously published article “Everything that Glitters is not Gold in NASCAR“. As mentioned, this series will focus on Xfinity teams that normally finish in lower part of the standings. Teams that are underfunded with drivers that sometimes have passed their prime time in the media’s spotlight. It’s time to give them a little focus also – they deserve it.

First out in this series is Mike Harmon, driver of #74 Dodge Challenger for Mike Harmon Racing. Mike Joseph Harmon, born January 24, 1958 (age 57) in Birmingport, Alabama made his NASCAR Busch Series debut in 1996 driving the #24 MedPartners Chevrolet at South Port Speedway. Harmon finished his debut race in P31 with a transmission failure. Mike was well known by many fans, long before his NASCAR debut, in various short track racing, with an impressing 300 career wins. People who have worked with Mike in the ARCA series said “he is probably the most focused individual I’ve ever met“. A very talented driver, especially on the short track, that really never got the chance to drive with good equipment.

Returning to Busch Series (Xfinity) in 2001, this time driving for Mixon Motorsports for 15 starts, the #44 car only finished 1 race (P28) that season (27.4% laps completed). Continuing with Mixon Motorsports in 2002, the story remains the same; 25 starts and 21 DNF. Best finish that year – P22 (started 41) at Daytona. In 2003, Mike started 32 times, a career high for this series again with Mixon Motorsports. 15 DNF, Avg.start: 35.0, Avg.finish: 31.3, 61.8% completed laps and 1 top-20 as best finish. With a new team partner in Mixon Motorsports (GIC – Global Industrial Contractors) Mike was released from his ride in 2004, starting 7 times that year. Harmon, together with Oostlander Racing, bought some assets from Innovative Motorsports and tried a couple of starts without success.

Mike Harmon is also famous for his terrible Bristol practice crash in August 2002. Splitting his #44 car in half, Mike miraculous walked away unharmed. In 2003, Mike got the chance to drive a Sprint Cup car at Daytona but failed to qualify his #78 Chevrolet (owned by Anthony Desmond) in Gatorade 125 race 1.

After not making it work in 2004 (Busch Series), Mike headed back to drive full season in ARCA Series 2005 (Oostlander Racing), collecting 4 top-10 finishes. Mike also made a few “start-and-park” appearances/year in NASCAR Camping World Truck Series 2001-2009 and in 2009 with his on #42 truck. Continuing driving in the ARCA Series full time to 2008, Mike tried a comeback in the Busch Series in 2007, starting 7 times for Richardson-Netzloff Racing. This attempt ended up with 7 DNF. Jennfier Jo Cobb took over the wheel later in that season.  In 2008, Mike tried once more in the Nationwide Series (former Busch Series), this time with his own team driving the #84 Chevrolet. He qualified for 11 starts and ended up with 10 DNF but collecting his best result ever with a P17 finish at Talladega (starting P43).

In 2009, Mike continued driving his #84 Chevrolet in the Nationwide Series, but also drove the #07 Chevrolet for SK Motorsports that year. He managed to qualify 10 times total that season. The stats showing Avg.start: 38.1, Avg.finish: 33.1, 58.1% laps finished, 6 DNF. Average finish is better than the starting position this year, showing that if the car holds up, Mike is able to advance a few positions.

In 2010, Mike took a year off from racing in Nationwide Series and drove part-time (15 starts – 12 DNF) in Camping World Truck Series for Lafferty Motorsports.

When finally Mike got some positive results from his long racing career, he managed to get himself arrested on May 15, 2013, accused of stealing a hauler and other racing equipment from Jennifer Jo Cobb. After first denying the accusations, the police found 2 Nationwide and five Camping World Truck Series cars in Harmon’s garage belonging to Cobb. An arrest warrent was issued and Mike turn himself in to the police in June 16. Cobb demanded the charges to be dropped in October. Cobb’s request was approved.

Trying to restart in the 2014 season, the stats from 2013 were not to be found this year. Starting more races costs more money for a team owner. 16 starts (4 DNQ) and 13 DNF with 38.2% completed laps ratio. Best results was a P28 finish at Talladega. Mike handed over the wheel of the #74 Dodge Challenger (switched to Dodge full time in 2014) under his owner/driver years to, for example, Carl Long who started 7 times in 2013 and Kevin Lepage, who started 8 times in 2014.

How is it going for Mike Harmon Racing in 2015 season then? Well, the stats is looking better then 2014. Driving the #74 Dodge full-time by himself, Mike has managed qualify for 16 of 18 Xfinity Series races. 1859 laps of 2971 laps total completed (62.6%) is showing that the team is going in the right direction. Avg.start: 36.8, Avg.finish: 33.2, 9 DNF, best finish at Dayota (P24). Also, looking into the stats real deep, you can see that the MHR intentions is to run full races more and more. In Camping World Truck Series, Mike have left the driver seat in the #74 Chevrolet to young Jordan Anderson with good results so far (82.2% completed laps).

The DNF is still to high but bare in mind that Dodge is a “newcomer” in NASCAR and with a week-to-week sponsorship it’s hard to put a competitive car in the Xfinity Series. The costs is enormous. Few series cost so much to race in as the NASCAR world, even down to ARCA series level. Having one Xfinity team and one CWTS team running afloat is not an easy business. Its very, very hard to do.

With all that Mike Harmon has been through in his long career, he never got the chance to show his talent with a fast race car/well funded team, I personally think it’s amazing that he fights to drive a race car year after year. Mike Harmon is race driver that’s loves racing – what more do you need?

Perhaps you will think different about Mike Harmon next time you watch an Xfinity race. Maybe not. Its up to you. For me, I will think about that black #74 Dodge Challenger a bit more.