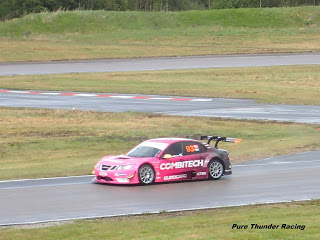 There have been long waiting, since 2007, but finally STCC returned to classic Anderstorp Raceway. Anderstorp Raceway, built 1968, held Formula 1 races from 1973-1978 with legend Nicki Lauda as winner 1975 and 1978.  The raceway total length is 4,031 km, with 8 turns and includes a 980 m long former airstrip that offers fast and exciting racing.

My review of the premiere in STCC Skövde was, from a crowd point of view, like heaven and hell (read more). This time, with a “proper” racetrack, the logistics (queues, spaces, parking etc.) was all good. The only thing that STCC couldn’t control this time was the bad weather. Cold (9’C), rainy and windy was bad for the teams and awful for the crowd. I think the weather held many racing fans at home this weekend and that’s sad, because racing at Anderstorp is worth a visit – even with bad weather.

The classes that competed at Anderstorp 30th of May was, as usual, STCC, V8 Thunder Cars, Carrera Cup, Formel Renault 1.6 and Clio Cup.

V8 Thunder Cars
The weather played its role for many new drivers. Some drivers had never driven on rain tires and some was not familiarized with Anderstorp Raceway.  Anyway, it was again, the double pole sitter #77 Alexander Graff  (Memphis Racing) that dominated the wet and rainy races. Graff took the lead in both races and held it in a dominant way. The only Dodge Challenger in the field, driver of #7 –Mattias Lindberg, (teammate to Graff) bounced back from a bad start at Skövde and finished P3 and P2 respectively. Stein Frederic Akre – driver of the #98 Chevrolet Camaro, is continuing to drive fast with a impressive P2 and P3 finish. Some drivers, like #78 Jonas Fors, gambled with slicks tires, because there were a small window of no rain, but the gamble miss fired and Fors ended up +1 lap in race 1. #76 Borgar Hansli didn’t make it to Anderstorp, due to a reported injury at Skövde.

STCC
It was 4-time STCC champion Richard Göransson (Team Tidö) who qualified best. That didn’t matter at race 1. Like so many times before, Thed Björk (Volvo Polestar Racing) finished first at the checkered flag with Fredrik Larsson (WCR) and Fredrik Ekblom (VPR) at P2 and P3. Only Erik Jonsson (Sportpromtion) ended up with a DNF.

In race 2, there were more excitement for the fans. Much more position changing between the cars and more tight battles everywhere in the field. Daniel Haglöf was up at the front with hard driving, but ended up at P5. Little surprisingly, Björk was not at the podium this time. Larsson impressed with strong driving and he was +3,2 seconds faster over second place Ekblom. Emma Kimiläinen (PWR), reported with a cold, drove her Saab 9-3 all the way up to the third place. Finally Kimiläinen finished top 3 again.

Carrera Cup
I must say, somewhat surprisingly, the most exciting event for me and my friends this race day. It was almost worth to whole entrance ticket to see brilliant driver Johan Kristoffersson (Kristofferson Motorsport) maneuver his Porsche 991 Cup car! Qualified at P15 (of 18) he had a long way to go in both races. It didn’t matter, Kristoffersson passed them one by one; on the front stretch, in the curves, almost anywhere. In race 1, Kristoffersson won by +4,6 sec. over Mats Karlsson (XL Racing) and in race 2 with +2,3 sec. over Oscar Palm. Mats Karlsson had a nice P2 and P3 finishes this race weekend. Jocke Mangs had the opposite race weekend, with P17 in race 1 and P5 in race 2. Mangs, who battled Kristoffersson so hard in Skövde didn’t stand a chance this time, but there will be more chances ahead…

Formula Renault 1.6 only had one race at Saturday’s event (the rest on Sunday). The German driver of Laurents Hörr (Dutt Motorsport) took the pole but couldn’t hold the lead and finished in P3. Both the race winner of Ilmari Korpivaara (Finndrive) and the runner-up Oliver Söderström (PWR Junior Team) impresses so far in Formula Renault 1.6 series.

In race 1, the margin to runner-up Andreas Wernesson was +10,5 sec.! Albin Wärnelöv finished at P3 with +11,3 sec. Just to strengthen my argument about Skoog, he won both races in Sundays event also…