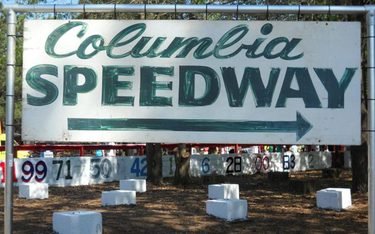 (Editors note: If you missed any of the previous parts of Tim Leeming’s Magic Window series they can be found Here; NASCAR Guest Articles Archives – Pure Thunder Racing )

The 1957 Plymouth the team had bought was taking shape into becoming a race car. Gutted, stripped and the 318 engine removed, work was ready to begin. Installing the roll cage and beefing up the suspension went without problems. When all that was done, Willie pulled the engine from the old Plymouth into the “engine room” and began to tear it down. On the second day of that process, Willie called Tim into the room to show him how the crash had damaged the engine internally to where it could not be repaired. Tim, not being very mechanically inclined, didn’t really understand the issue, but he knew that was it for the engine. This time there was no wrecked pickup truck from which to obtain an engine. Although this was a huge letdown for the crew, Willie began to search around for a replacement slant six engine.

One would have thought that buying an entire race ready car for $600.00 in 1969 finding a new engine in 1971 could not cost that much. How wrong was that thinking! Willie finally located a 225 CI slant six in a junk yard but the guy wanted $850.00 and we had to pull the engine from a wrecked Dodge. First issue was the Competition Incorporated bank account now had less than $100.00 in it and the likelihood of putting more in soon was very slim. The only alternative, at this point, was to look for sponsors and prepare for the 1972 season.

Before going sponsor seeking, we painted the ’57 with a beautiful red, white and blue paint scheme. The number 2 was put on the car and pictures were taken to show any potential sponsor. Tim went to any business that could remotely be associated with humanity in search of a sponsor. The only real potential was the local hamburger restaurant Tim had frequented during his high school days. Problem was the owner didn’t want to put up enough money to make it over the hump with the expenses.

It seemed there was no hope of returning to the race track and seeing the wrecked number 2 behind the garage every day started to become and distraction and a depression for Tim so he had a friend with a backhoe come in and dig a hole on the two acres where he resided and had the wrecked Plymouth pushed in the hole. Tim actually buried his first race car. No real ceremony to it, just pushed it in the hole and covered it up.

Willie and those with Tim’s crew migrated over to brother Richard’s team and the big tin garage of Competition Incorporated was locked with the red, white and blue Plymouth resting inside minus an engine. Tim continued to go to the races each Thursday night but as for serving on the crew, Tim’s talents were limited to cleaning Richard’s windshield.

When the season ended in September, Tim had more or less given up on obtaining a sponsor or returning to the race track ever. Tim was not usually a quitter but it seemed as though he had reached the insurmountable obstruction. While kids from the neighborhood would still come by from time to time, it was nothing more than to talk and look at the engineless car in the garage. Tim had covered the car with sheets to keep dust from accumulating on the car and, from time to time, the kids would remove the sheets so they could sit in the car and pretend they were racing at some track known only to their personal imaginations.

It seemed all the excitement of so many people who had come to the track that August night in 1969 had waned over the three seasons Tim raced. It was a long and cold winter for Tim, although he enjoyed the holidays. He always did. As the New Year dawned, Tim thought about what could have been. What if there had not been all those clutch problems in the early part of 1970? What if he had tried just a little harder or rougher to beat drivers he could have easily moved with his bumper? What if………?

February 21, 1972. Not sure what other significance that date has in history, but for Tim it was the night he got a phone call from Leonard. Leonard had been a very successful, ultra-successful Hobby Driver at several tracks. His success had moved him up to Late Model (NASCAR did those things back in those days) and he has his 1955 Chevy Hobby Car sitting in his shop in need of a driver. He asked Tim to come down to his shop, about 50 miles from Tim’s house to talk. The Saturday of the meeting, Leonard told Tim he hadn’t really decided what he was going to do but he was thinking having a driver for his car in Hobby would be to his advantage. During that meeting, he had Tim get in the Chevy and measured for seat location and the like. When Tim was leaving, Leonard shook his hand and told him he had a ride for the first race at Columbia Speedway in April.

As Tim drove the 50 miles home his minded raced with the thoughts of what this was going to mean. A chance to drive for someone in a car that was a proven winner and it was not costing him anything but the $10.00 to renew his NASCAR license. That sounded like a good deal to anyone.

The dank cold days of February bled into March with hints of spring in the air. March was its blustery self as Tim counted the days until the first race in April. The calendar that hung on Tim’s kitchen wall had an “X” crossing off each day that passed along with the countdown to the first race date. Finally it came. The day was warm, sunny and the promise for the evening was warm weather and clear skies. A perfect night for a race.

Tim pulled into the Columbia Speedway infield about 5 pm sharp, parked and walked into the pits. Leonard and the Chevy were not there yet and Tim felt a momentary fear that maybe it had all been a dream and there would be no Chevy appearing through that infield gate. Finally, around 6:30 the tow truck and race car pulled in and parked in the infield. The car was unloaded and Leonard drove it over to the pits. Tim walked over and talked with Leonard who was as calm and unassuming as anyone in racing. Leonard told Tim everything was ready to go and he felt like we could win this race.

The drivers’ meeting was held and Tim reached into that little canvas bag Dan Scott had to draw out our little metal tags with numbers on them. Tim drew number 13 which put him in the second heat race starting 8th for the heat. The first heat race was crash filled and only 6 of the 15 starters finished. Tim was hoping the second heat race would be less of a crash fest.

Tim had felt odd in practice in the Chevy because he was used to torsion bars and leaf spring suspension. The Chevy had the coil springs which gave it an entirely different feel. The power was good, in fact awesome, but, in Tim’s mind, not quite what he had enjoyed with that new Plymouth engine in 1970. Nevertheless he was ready to race.

Dan waved the green flag to start the second heat and Tim moved to the high groove where he had experienced success with the Plymouth. Entering turn one, high and on the outside of the 7th place starter Tim immediately realized two things; First, the Chevy was an inside groove car, definitely not an outside groove competitor. Secondly, as the 7th place car drifted up and almost scraped the side of the Chevy Tim was driving, Tim realized he was not in his car and he didn’t want to tear up Leonard’s car. Having that load on his shoulders brought about an overly cautious mindset. By the end of the 25 lap event, Tim had moved into 5th place but was far behind the 4th place car. It was definitely not a good showing. In his graciousness after the race, Leonard told Tim he was just going to park the car and not spend any more money on it. So the Chevy ride for 1972 was a “one and done” deal.

The next week when Tim showed up at the track, Dan Scott walked over to talk with him. Dan wanted to know if Tim would like to work with him as a NASCAR assistant handling such things as lining up the cars and holding that little canvas bag from which the competitors drew numbers for heat race starting positions. Of course, Tim agreed. That would allow him free admission to the track every race and Dan was one of the greatest guys Tim had ever met. Tim didn’t know it for sure, but he suspected Dan was a Marine Corp Drill Instructor, but with a soft side for racers. That is unless the racer violated the rules.

For the remainder of the 1972 season, Tim worked with Dan and NASCAR, not only at the Columbia Speedway but at Savannah on Friday nights. Tim would ride with Dan to Savannah each week. In 1972 Dan was driving a Pontiac Bonneville and the trip to Savannah was about as thrilling as qualifying at Daytona. Dan only knew two speeds, stopped and flat out. Tim often wondered why Dan never drove a race car because he surely felt the need for speed. Tim also wondered how Dan made that trip each week with some highway patrolman giving pursuit. Tim finally established the fact that any highway patrolman on duty would not attempt pursuit of that speeding bullet also known as a Pontiac.

When the season was finally over, Tim, Dan and a few of the drivers from Hobby and Late Model divisions all got together for sort of an end of season celebration and the well-known Bar-be-que restaurant just down the road from Columbia Speedway. There was much talk among the drivers as to their plans for the 1973 season. Some Hobby drivers were moving up to Sportsman the next year and some of the Sportsman drivers were building new cars. Tim listened to the plans, laughed at the appropriate times, but was feeling left out as he would not be returning to the track as a driver. That was just not in the works. But, as always, unpredictable things seem to come about at the most unexpected times.

Don’t forget our podcasts, The Racing Spotlight and Ghosttracks & Legends Race Talk on Tuesdays and Thursdays at 7:00 Eastern Time.