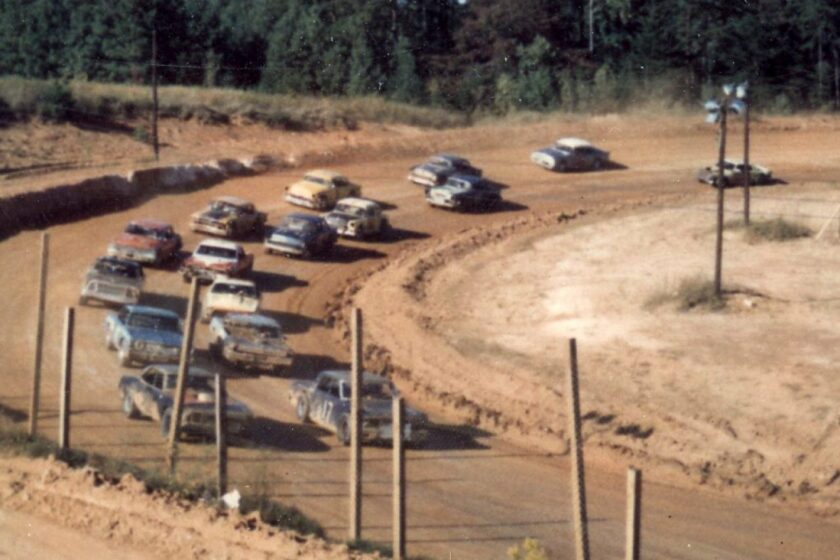 (Editors note: If you missed any of the previous parts of Tim Leeming’s Magic Window series they can be found Here; NASCAR Guest Articles Archives – Pure Thunder Racing )

When we left Chapter Four of this amazing journey, the Plymouth team had almost won a race, had it not been for a clutch that decided to remove itself from the power train thereby rendering all the power of the newly built engine useless. That was the first of five consecutive weeks of clutch issues for the Plymouth. Second race night, we were second in the heat; lost the clutch on lap four of the feature. Third week, same thing with the clutch, but the details are lost to a misty mind. Fourth week, another clutch problem. Fifth week, another.

As we were loading the car on the trailer to head home, pretty certain that we would not be returning to the track in 1970 due to lack of funds, Herbert Corley walked over and talked with Willie a few minutes. I never knew what was said, but Friday Willie was over at Corley’s garage to pick up some “spacers”. Then Willie talked his Daddy into “just one more clutch expenditure” and although that conversation remains private between those two even today, we got the new clutch and Willie went to work under the car. By Tuesday, the clutch had been replaced and whatever those spacer things were had been added. The neighborhood boys had washed, waxed and polished the car to the maximum allowed under the rules (just a little joke there.) We were ready for Thursday night. We had already decided that we would run only Columbia Speedway for the rest of the season as here we were approaching June and had exhausted every penny of the Competition Incorporated bank account.

Thursday night was clear, with the moon providing almost more light than the dim 40 watt bulbs that lined the speedway. Ok, exaggeration there but there WERE spaces on that speedway where it was a little dark. The crew unloaded the car in its usual pit space right next to the Chevy driven by this young guy named Dennis. Tim and the crew had watched the races for the past five weeks (funny how that worked out) and knew that Dennis had a fast car and was a better than average driver. This Thursday night the team was to find out just how much better he was.

On the track for practice and track “smoothing” Tim was a little more than anxious about the clutch situation, but after about 10 laps, he began to feel confident that this was going to be a good night. He actually thought about bringing the car in early so as not to overdo the clutch issue but about that time, that Dennis guy in that Chevy came up behind him fast as Tim was slowing down to enter the pits. Dennis bumped the rear end of the Plymouth hard enough to jolt Tim in his seat. Well, Tim thought to himself, let’s see what he have here. Dennis had passed the Plymouth and was heading for turn one when Tim caught him. Dennis was low, Tim was high, and as they came off turn two, Dennis rubbed the driver’s side of the number 83 and left those telltale “doughnuts” just behind the numbers. Same thing happened in turns three and four.

In the pits, Willie saw what was going on and walked to the edge of pit road to wave Tim in. Next time around, Tim pulled in and Dennis came in right behind him. As the two cars stopped in their adjoining pits and Tim and Dennis exited the respective cars, some were anticipating a fight. Instead, the two drivers were laughing and immediately started talking about how much fun that was. As the two crews and drivers talked together, the track operator showed up and asked if we were seriously having issues to which we both responded “absolutely not”. The track operator hinted that a nice rivalry in the Hobby Division may be a good thing.

As it worked out that night, Tim was in the first heat race, starting sixth, and Dennis was in the second, starting fourth. Tim finished third as did Dennis in their respective races which meant a side-by-side start in the feature. That would provide the track operator exactly what he wanted although neither Tim nor Dennis could anticipate what was about to happen.

The green flag was waved and the field raced into turn one. The third place starter bumped the fourth place starter moving him into the oak wooden guard rail in the turn. The mess behind that wreck was confusing enough to the Flagman that he threw the red flag to stop the race, realign the cars, and get ready to the “real start” of the race.

The green flag was back out and Dennis was in front of Tim going into turn one when Tim went to the outside, the part of the track Tim liked best although not always conducive to success in passing. Off turn two, side by side, went the Plymouth and the Chevy. This time they didn’t touch. Coming off turn four was another story as Dennis pushed Tim almost high enough to engage the guard rail. The guardrails on the front straight at Columbia were actual railroad tracks welded to railroad tracks as posts. Tim would learn, in the distant future, how destructive that system could be, but tonight, the race was on. Dennis was third, exchanging that position every few yards with Tim. On lap 16 or 17 of the 25 lap feature, the car in second place experienced some mechanical malfunction and it was now up to Dennis and Tim to decide either second position or the win. It was appearing as though the race was for second because Ray, in that Falcon, was at least a half straightaway ahead.

On that night, and for the rest of the 1970 season, the Chevy and the Plymouth were as evenly matched as the future IROC cars were deemed to be. It seemed as if the two were welded together as they rubbed, sometimes with sparks flying. When the white flag was displayed, Tim looked over at Dennis as they crossed the line and felt as though he had the position by at least a foot. In turn one, Dennis pushed Tim really high and the back of the Plymouth almost went over the embankment where there was no guard rail off turn two, the exact place where Maurice Petty had wrecked in 1962 which, he later said, decided his fate as an engine builder instead of driver.

That little shove by the “Menace” gave him just enough lead to keep the Plymouth in the rearview although Tim made a strong effort to catch him enough to bump him off turn four. Couldn’t get close enough though. So, it was Ray in first place, Dennis in second, and Tim in third. Tim was so elated by the excitement of that race that he had forgotten all the clutch issues of the previous five weeks. Of course, Willie was ecstatic that we didn’t have clutch issues.

By the time Dennis and Tim exited their cars, a good size crowd had gathered on the other side of the pit fence. No doubt they were hoping to see a fight, or at the very least a good cussing out. It was almost as if the two drivers had rehearsed the moment but such was not the case. Both drivers scowled at one another and approached each other menacingly. Tim grabbed the front of Dennis’ shirt and got right in his face to whisper “let’s play this up.” After three or four minutes of pretended aggression, the two drivers and their crews went about watching the Late Model Feature.

At the pay window, the track promoter shook both Dennis’ and Tim’s hand as he whispered “that’s what the Hobby Division needs.” As the cars left the track, we headed down the road to the Bar-be-Que place that always stayed open late on race nights. The Dennis and Tim teams ate, laughed, and planned the next week’s show. Fans thought there was animosity between the two, but nothing was further from the truth.

The remainder of the 1970 season was what Tim and the crew consider a success, especially after the way it started. We ran Columbia Speedway each Thursday, ventured to Savannah on Friday nights a couple of times when funds supported it, and even made a couple of runs to Myrtle Beach. Both Savannah and Myrtle Beach were happy to have us although the uniqueness of the Plymouth had faded some now that Mopar had the Superbird and Daytonas on the track.

When the season was over and the Plymouth backed into the tin garage for an overhaul to prepare for the 1971 season, the team discussed the fact that since we had so many second place finishes and never a win, we would change the number to 2. We also decided a new paint scheme was in order and it was decided that blue, white, and gold would become the colors of Competition Incorporated.

Tim’s brother had entered the racing scene as a driver in 1970, in the Hobby Division, with a second (maybe third or fourth) hand Ford. A cement block garage was built for him and fully equipped with everything needed. At the same time, two of Tim’s friends, Roger and George had both bought used race cars, George a Ford and Roger and Chevy, so with funds provided by those two we added onto the tin garage behind Tim’s mobile home. It was decided that all cars would carry the “CI” of Competition Incorporated on the front fenders, much like the “HM” on Holman and Moody.

As it happened, the drivers and crews took only a few days off before beginning the addition to the tin garage and the preparation to repaint and renumber the Plymouth. It was six months until racing season would begin at Columbia Speedway and the teams were always working on plans to run other tracks, funding permitting. The bank account for Competition Incorporated was not huge, but having run only the Columbia Speedway for the most part and having success after the debacle of season beginning, we had a few dollars in that account. Enough to repaint the car and rebuild the engine. We were happy and already looking forward to that next season.

One Friday afternoon, as the crew was working just “make work” things to be together and be around the race car, Tim’s phone rang inside the mobile home. Tim raced in to answer it. The caller was the owner of a local heating and air conditioning company that specialized in Payne heating and air systems. It seems he was at the track every Thursday and had even come into the pits to meet Tim more than once. Tim’s mind raced through all the pit encounters and although he could not specifically recall the man, he listened intently to what the man was saying. That phone call would change the outlook for the 1971 season.

Don’t forget to check out our podcasts, The Racing Spotlight and Ghosttracks & Legends Race Talk on Tuesdays and Thursdays at 7:00 Eastern Time.