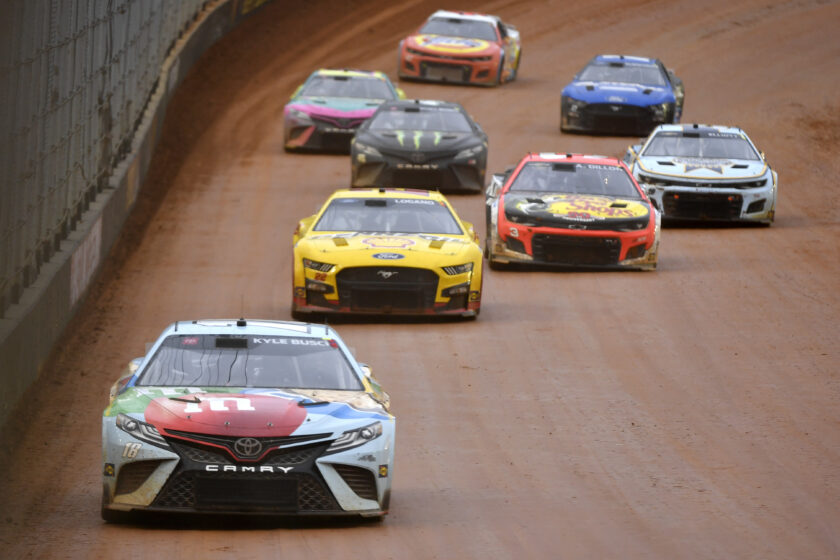 I’m doing this one to maintain consistency. The race format was like no other so it makes any comparison nearly worthless, but here goes.

Busch, who was critical of Cup racing on dirt, found himself the lucky beneficiary of a slide job gone bad when Chase Briscoe’s banzai move took out leader Tyler Reddick in the final turn of the final lap.

Reddick completed a 360 degree spin, collected his Camaro and almost beat the trailing Busch back to the line. He missed his first victory by 0.330 seconds and had to settle for another second place finish. Briscoe was less fortunate as his Hail Mary move for the win resulted in a 22nd place finish.

NASCAR saw it’s first NEXT GEN dirt 250 lap race punctuated 14 times for 82 laps of caution along with a most untimely red flag. There were 6 lead changes among 5 different drivers with Briscoe taking the point twice. Runner-up Reddick led 99 laps to top all leaders.

Race winner Busch led one lap, the most important one.

The average speed was 34.973 mph… quite a bit different from what we’ll see this coming weekend at Talladega.

Here is how the remainder of the numbers from the race broke down.

Lead Changes-A Closer Look. As mentioned earlier, there were six lead changes among five different drivers. The Lead Changes broke down as follows-

Five Green Flag Lead Changes. There were three Green Flag Pit Stops that occurred on the Restart after the Caution period ended, including a gutsy pass by Tyler Reddick as he shot the gap between Kyle Busch and Joey Logano at the start of Stage 3.

The other two Green Flag Lead Changes occurred when the Leader wrecked or was wrecked from the lead, giving the lead over to a trailing competitor.

In the first instance, Chase Briscoe had a tire go down, spun and gave the lead to Kyle Larson. Everyone knows the other instance, where Briscoe took out the leader Reddick on the final turn of the final Lap.

Hard to believe… There was so much action. So much excitement and drama or so it seemed. Unfortunately, that’s how the numbers broke down.

The numbers that count

So that’s a wrap on the 2022 Bristol Dirt Race. Ir provided an unexpected finish along with some unexpected numbers. About the only thing that wasn’t unexpected was the announcement we’re going to do it again next year.

On to Talladega for the next phase of the Great NEXT GEN Experiment. We’ve seen how it takes to high banked, short track dirt. Let’s see how it does on the high speed, high banks, big track. Talladega is always filled with its own uncertainty and adding a new car to the mix will only escalate the uncertainty.