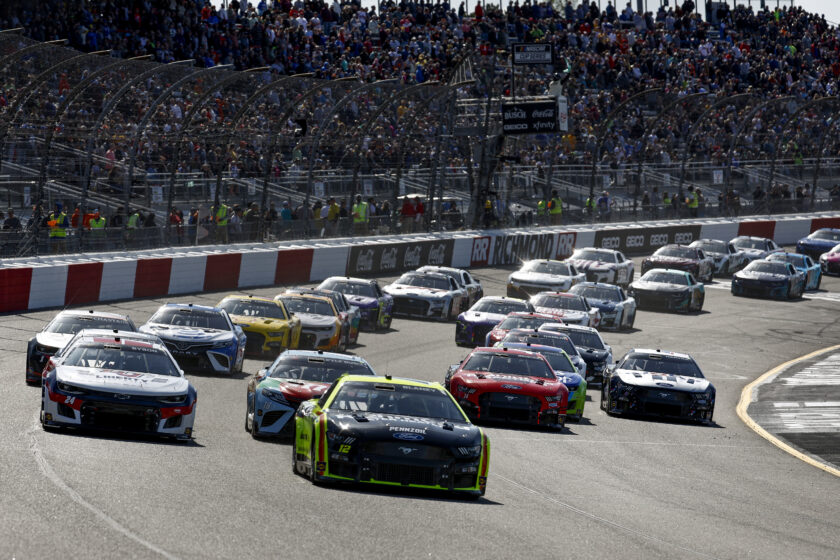 “Strategy” has been THE word used to describe NEXT GEN’s 400 lap short-track coming out party since the Checkered Flag dropped at the .75 mile “Action Track”.

Hamlin used it to become the seventh new winner this season and the first winner in the last twelve races over the age of thirty. His win marked the first win for Toyota since his 23XI driver, Bubba Wallace won at Talladega, twelve races ago. Hamlin’s last win came the week before that at the Las Vegas Playoff race. It was his fourth win at his hometown track and his 47th career Cup win. That moved him into 17th place ahead of two time Champion Buck Baker and one behind two time Champion Herb Thomas-both NASCAR Hall of Fame Inductees.

Hamlin beat another “Old Dog”, Kevin Harvick by .551 seconds. Both took on an extra set of tires in the final Stage and used the fresh Goodyears to run down Byron five laps from the Checkered Flag to take the win.

Hamlin led one time-the final five laps, including the one that mattered most. Ryan Blaney sat on the Pole and led the first 129 laps of the 400 Lap Race to win Stage One. Martin Truex, Jr. came on to win the caution-free Stage Two as tire strategy began to play out.

The race saw five Cautions for 35 Laps and saw seven different drivers lead laps, with Truex, Jr. and Christopher Bell taking the point four times each. Pole-sitter Blaney led once for 128 Laps. There were 13 lead changes for the race, the bulk a result of Strategy.

Strategy shows up in the number of lead changes

The 13 lead changes saw four occurring during caution flags with the remaining nine lead changes taking place over the 365 green flag laps. Three of the four Caution Flag Lead Changes were a result of Pit Position, with the final one being caused by William Byron staying out (Strategy) and assuming the lead when the others pitted.

In previous races this season, restarts have been a focus of viewing excitement. Richmond was the first race of the season where no one passed the Leader during the first three laps following the Start or Restart of the race.

Seven Green Flag Lead Changes occurred when the Leader pitted from the lead (Strategy) turning the lead over to P2.

Strategy to the max!

Yet as the race come to a close, we saw one-stopper “tortoises”-Byron and Truex, Jr. being run down by the two-stopper “hares”-Hamlin and Harvick with the race decided by a final Racing Lead Change.

For a Strategy race it’s about the most you could hope for.

Richmond’s two Racing Lead Changes places it fifth for the season, ahead of Phoenix and COTA’s single RLC

How did the NEXT GEN do?

Long green flag runs is something that had been absent this season. Only one run to date ran long enough to require Green Flag pit stops. Richmond, known for its green flag runs would give NEXT GEN a chance to show its stuff. Unfortunately, varying Strategies made it difficult to determine exactly how it performed under those circumstances.

What about the passing?

Green Flag Passes-One indicator was the main NASCAR metric-Green Flag Passes. This race saw 3072 Green Flag Passes, the most every recorded at Richmond. In the 34 races where that stat was recorded this is only the second time GFP’s exceeded the 3000 pass mark with the other occurring in the 2013 Fall race. Last year’s race had almost 700 fewer passes.

Quality Passes-1,145 Green Flag Passes or 37.3 % of the passes were in P1-P15, making them Quality Passes. These passes were distributed slightly to the back part of the field who is not a surprise with the different pit Strategies used by the teams.

Green Flag Passes For Lead-this stat indicate how much “racing” took place up front. The bigger the difference between this number and Green Flag Lead Changes indicates the “back and forth” that took place throughout the lap

This race had 9 Green Flag Passes For Lead. It had 9 Green FlagLead Changes. There was 0 differential. This means there was no “back and forth” at the point. This is not a surprise and further points to a “Strategy Race” as Lead Changes that occur because the Leader Pits from the Lead or a significant tire differential produce no exchanges-just the pass. That’s what we saw on track

How about Cars On Lead Lap?

Are there any other numbers of interest?

222-The number of laps between crew applying tape to the grill of the #18 and NASCAR black-flagging the car to bring it in to remove the tape. Violations are violations but the race is only 400 laps long and the tape went on at Lap 126.

102-Number of minutes into the race before fans saw a car pass the leader for a Racing Lead Change. Converting to hours and minutes that’s 1:42

87-Number of minutes after the first Racing Lead Change fans saw the second and final one. That’s 1:27 in hours:minutes.

30-the number of green flag laps it took Denny Hamlin to come from a lap down to pass the leader. All under green. Shows what a difference fresher tires make here.

9.1-the number of seconds it took the Kyle Busch’s team to perform a four-tire stop using the new JGR Pit Stop Choreography…everyone to the front!

9-The average number of Caution flag laps for a Stage Break. This is three more laps than it took to clean up for the multi-car incident cautions. Just sounds backwards.

9-Positions gained by Hamlin and Harvick in the final 10% of the race, making them the biggest Closers

2-Number of multiple car incidents in the race. Each involved three cars and was the first multi-car incidents at the Spring race since 2018.

0-The number of tires lost this weekend.

0-Also the number of crew chiefs who will be sent home for four weeks for losing wheels.

0-Number of cautions that happened in the final 137 laps of the race that allowed the various Strategies to play out.

Richmond was a different race than what we have seen so far this season. Tires was the name and Pit Strategy was the game. The race had so many variables from New Car to new tires to new wheels to new Stage Lengths to new Pit choreography it was hard to determine why it was what it was. For those fans who enjoy Pit Strategy races and everything coming together at the end for a final overtake like an F1 race this race was for you.

If that isn’t your cup of tea then Martinsville should be more to your liking.

One race doesn’t a trend make but if this is indicative of NEXT GEN racing at the .75 mile oval, the new, incoming track president may want to rethink their long-time moniker “Action Track”.

Hopefully, we’ll see more when they return under the lights in August.