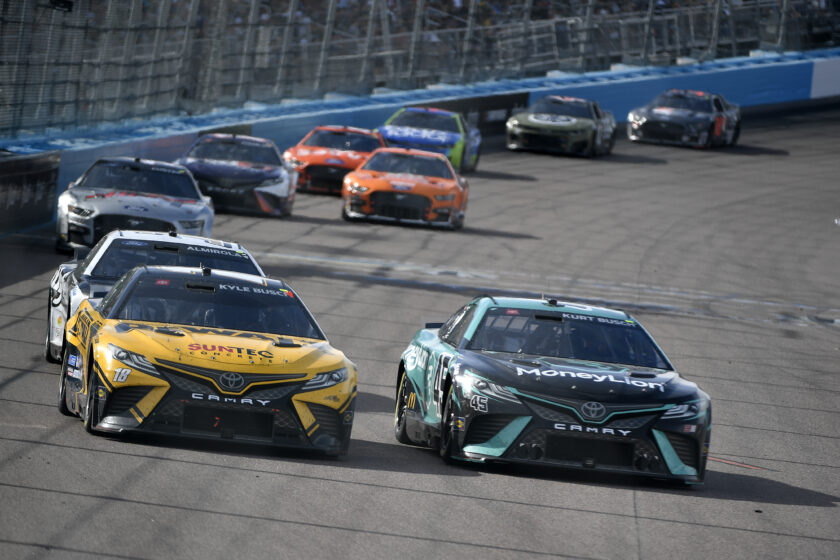 Phoenix completed the Western Swing and finished the first round of tests for the 2022 Cup Series and it’s new NEXT GEN car.

This is the primary metric NASCAR uses to to measure the competitiveness of the racing.

942 of the GFP were between P1-P15 making them Quality Passes. 45.8% of the GFP took place in the front 41.7% of the field which indicates this action was taking place toward the front.

This is the most positive statistic for the race.

These are Green Flag P1 passes captured at the scoring loops or Start/Finish line. Over the 260 Green Flag Laps there was a total of 13 GFPFL.

Green Flag Passes For Lead that occur or are held to the Start/Finish Line are scored as Lead Changes.

For the race Sunday there were 14 Lead Changes among 6 Drivers. 11 Lead Changes occurred under Caution meaning…

Of those, 2 were during Restarts.

There was 1 Racing Lead Change for the race

Looking back over that time period we see

But what about those Restarts?

Phoenix is known for its wild restarts where cars take to the apron through the dogleg to go 5, 6, sometimes 7 wide in an attempt to make up positions or take the Lead.

On the 9 Start/Restarts, Chase Briscoe was able to pass for the Lead on the restarts of the 2nd and 7th Runs, passing Joey Logano and Chase Elliott respectively.

So the 9 Starts/Restarts looked exciting for the fans but when scored, 7 resulted in no Lead Changes

But it had an exciting finish

Yes it did and Chase Briscoe did a masterful job to bring his car home ahead of Ross. Chastain and Tyler Reddick. The .771 second Margin of Victory chopped nearly a second off the 1.698 second 2021 race, but fell short of the .276 second MOV of 2020.

It was the fourth closest finish since 2016 when the MOV was an incredible .010 seconds.

A contributing factor to the close finish was for the fourth race in a row the final restart came with four laps or less remaining.

What did the other Green Flag Runs look like?

The 9 Green Flag Runs varied in length from 3 to 61 Green Flag Laps. None were long enough to require Green Flag Pit Stops.

Here is the race breakdown with the Run#, Green Flag Laps and number of Lead Changes that occurred in each

When you look at Runs that’s a lot of Green Flag Laps without any action up front.

How were the Stages won? How did Briscoe win the race?

Stage 1 was won by William Byron when he took the lead coming down to take the Flag on Lap 52-the Final lap of the Caution and lead the final 8 Laps of the Stage.

Briscoe won the race with a Pass on the Restart on Lap 230 and held the lead except for one lap during a pit stop, which has been discussed earlier.

Are there any other stats from the race of interest?

Of the 15 drivers with RLCs, 8 have multiples. Outside of Daytona, only two drivers have multiple RLCs-Ross Chastain and Tyler Reddick– the drivers who finished P2 and P3 behind Briscoe on Sunday.

Was Phoenix a good race?

The Chase Briscoe story, not the race statistics have dominated the Phoenix post-race discussion, as it should. It’s a great story and to go through what he has gone through just to get to Cup is phenomenal and to win…

Couple that with he was racing two other drivers competing for their first Cup win only adds to it.

Underlying it all is the NEXT GEN car and all that surrounds it. As the teams work to figure out the car, how to set it up, service it and adjust it and drivers figure out how to race it, the needle for potential mistakes and misjudgements is pegged. The constant, looming level of uncertainty surrounding the car and everything about it in and of itself heightens fan interest.

Combined, it makes Phoenix an interesting race, but I can’t help but wonder what the story and tone would be like today if that was Martin Truex, Jr., Kurt Busch and Kevin Harvick instead of Briscoe, Chastain and Reddick at the front of a Three Green Flag Lead Change race that only had one Racing Lead Change?

Would the buzz and reactions be the same?

Congratulations Chase Briscoe for win No. 1 and for punching your ticket to this year’s Playoff. May your year keep getting better.

Congratulations to SHR and Mahindra Tractors for getting into Victory Lane. It looks good on you.

With Phoenix in the rear view it’s time to head East to Atlanta-the Intermediate that identifies as a Superspeedway.

Another new track. Another NEXT GEN test.

Tune in and let’s see how it all unfolds Sunday.