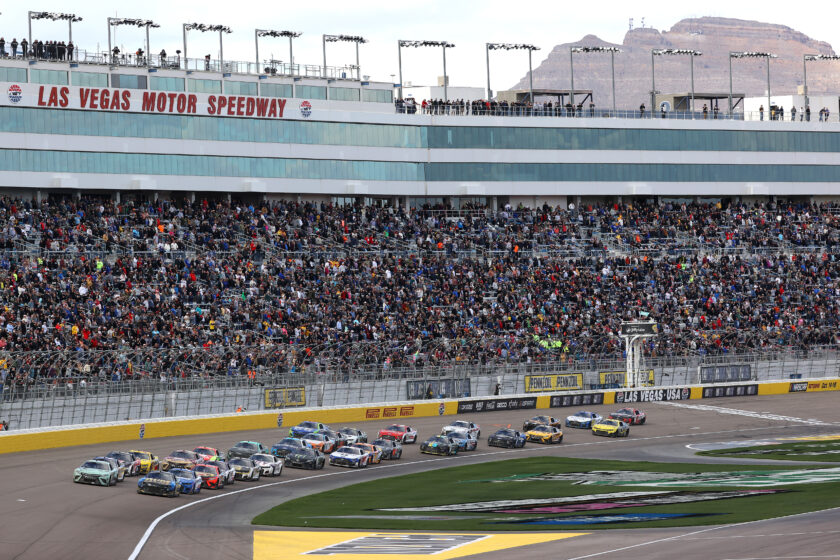 Another 2022 Next Gen Cup race and another week of rolling out impressive numbers.

Before we totally close the door on the latest race from Sin City, let’s take a deeper look into some numbers from the you might not have seen reported.

This year’s Pennzoil 400 was an overtime event that went for a total of 274 laps. There were a total of 12 Cautions for 60 laps, resulting in 214 Green Flag Laps.

Race Winner Alex Bowman also won Stage 1 led a total of 16 laps including the final three of the race. His winning pass took place on the last lap of the 12th Caution when he beat Race Leader Kyle Larson to the Green Flag for the final restart and held on till the Checkers.

Third Place finisher Ross Chastain led the most laps-83 and won Stage 2. Kyle Busch was the next closest in laps led with 49. Considering he was racing a hastily assembled backup, had to start in the rear, spun and went to the back again, was in the Top 10 before the end of Stage 1 and was leading when the final Caution flew, that was one heck of a ride.

This is all pretty standard fare. Leta go a little deeper.

There were 13 Green Flag Runs which varied in length from 1 to 47 laps of Green Flag Racing. Predicted as a Race of Long Green Flag Runs, only one Run had Green Flag Pit Stops. Three Runs had no Green Flag Passes. Five had Passes during the first three laps following a Restart while the field was bunched and restarted double file.

The inaugural NEXT GEN race at Las Vegas saw 23 Lead Changes among 15 Drivers.

Of the 23 Lead Changes, 11 occurred under Green. The Green Flag Lead Changes break down as follows:

Green Flag Passes For Lead counts the number of Passes for P1 detected at the Scoring Loops and Start/Finish Line. GFPFL May or May not result in a Lead Change depending on whether the pass is sustained to the Start/Finish Line. This race saw 57 GFPFL that resulted in 23 Green Flag Lead Changes. This 34 Pass differential indicates the amount of “back and forth” and “competition” at the front of the field.

This race saw 3271 Green Flag Passes for Position or 15.3 Passes per Green Flag Lap. 1283 were Quality Passes or Passes in the Top 15 Positions. That means that 39,3% of these Quality Passes occurred in the top 40.1% of the positions. This indicates the passing was nearly evenly distributed throughout the field.

So what was so good?

The fans who voted in the Jeff Gluck poll gave the race exceptional marks, even though the race saw only 4 Racing Lead Changes. Maybe the race was just that much better than the 2021 Version? Let’s see what the stats say.

Comparing this race to the first Vegas race of 2021, we see the following-

Statistically, the 2021 race had more Green Flag Laps, more Green Flag Passes and more Lead Changes than 2022 but the fans overwhelmingly chose the 2022 race as the better race.

The finish had to factor in. A tire strategy call to put HMS cars in front of the dominant Joe Gibbs Racing cars for the Green-White-Checker finish had to help. Bowman and Larson running side by side for the last lap and three quarters didn’t hurt.

Maybe the vocal fans like shorter runs punctuated by spins and find it more appealing than the long green flag runs we saw in last year’s race from the “Greatest Season Ever”.

The new car with increased horsepower and different aerodynamics are making the cars a handful to drive. One bobble sends the car up the track and quick deceleration to correct can result in a snap spin which was non-existent in the GEN-6 cars of yore.

The drivers are still trying to sort out the new aero and how to race with it. Less sideforce makes the sidedraft less effective as a passing aid, but the narrower wake behind the cars appear to allow runs on the lead car and to race side beside with less effect.

Runs and completed passes are two different things and it will be interesting to see how the drivers adapt as the season rolls on.

The new bodies have shown they can take a lick without cutting down the tires as car after car hit the wall but continued on unlike previous years. At one point in the race, Ross Chastain was the only car in the Top Ten that hadn’t had at least one issue either on track or in the pits, yet teams were able to rebound and remain competitive, which adds a new twist.

Teams are still trying to figure out routine pit stops as well as how to address damaged cars. Addressing a car coming in on flats was second-nature last season is now a new and different adventure this year. Seeing the teams adapt to get a car up for repairs without additional damage to the underwing adds a whole new element.

The race saw teams going through a ton of tires and as the race unfolded found themselves executing different tire strategies throughout to try and wind up with one good set for the final run to the Checkers. Tire conservation strategies are not in common in the lower series but has now made its way into Cup. We all saw how a good tire strategy paid off Sunday.

There seemed to be a better response when flats occurred as drivers kept their cars moving so as to not get high centered as we saw in the first two races. Hopefully, we’ve seen the last of that issue-but Vegas oddsmakers say no.

Whatever it is, if 4 Racing Lead Changes over 400 miles will get you a 90+ rating in the Gluck Poll I wonder what 5 would score?

Let’s watch Sunday. Maybe we’ll get to find out?