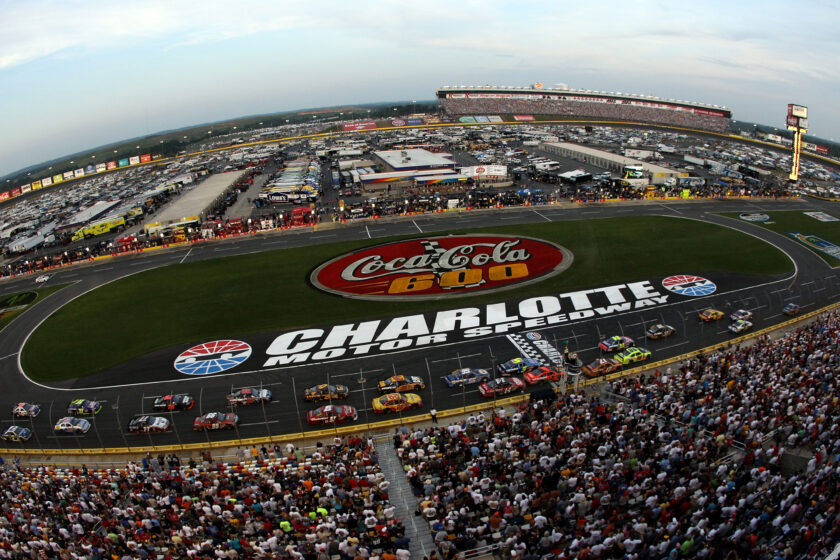 A few weeks ago, Richmond Saturday was the 20th Anniversary of the terrorist attack of 9/11.

Those around then will never forget the horrific event after horrific event that unfolded before us that day. The beautiful September calm shattered by what first appeared to be a very unfortunate accident. Less than three hours later, 2933 innocent were dead including 412 first responders. The Pentagon was severely damaged. Both Towers of the World Trade Center collapsed into smoldering heaps and a nation forever changed.

We raced that Saturday at Richmond. A double-header. Xfinity and Cup. NASCAR, Richmond Speedway, the teams, drivers, sponsors, fans and media did a magnificent job remembering that day and honoring those lost.

There were many pieces done on how those event affected the industry and those in it. How we didn’t race the Sunday after the tragedy, but came back strong the following week as patriotic NASCAR fans flooded Dover. The pre-race chants of “U-S-A” by the flag waving Dover crowd became a lasting image of the resolute of a hurting nation.

It was an image this race fan hopes to never forget.

But there is another NASCAR event that followed that touched me even more than Dover. It was two weeks after Dover, twenty-six days after that horrific day. It was my first trip back to the track at Charlotte. The trip had been planned long in advance, long before the world changed.

There was concern being in such a large crowd during these uncertain times. A gathering of 100,000+ people at a televised sporting event seemed ready made for those behind the initial attack. But since no one knew what lie ahead, where we might be, whether there would even be racing in the future, Dave Rosenbaum, Keith Smith and I decided to make the go ahead and make the trip to our favorite fall race-Charlotte (pre-ROVAL).

It was different from previous races there. There was the normal pre-race road trip excitement but admittedly it was coupled with a nervousness and uncertainty about the outcome-not of the race but of the weekend. Would I be coming back was a new but real thought. The good-bye hug and kiss with my wife lasted just a little bit longer. A final reminder for her to just this once watch the broadcast… just in case, was a final instruction.

Such is the effect of terrorism.

On race day, we pulled into our usual parking spot in the lot off Morehead Road. It all seemed normal enough, well as normal as it could be considering the circumstances. Hanging out in the parking lot beforehand, bench-racing and people-watching before eventually packing up and taking the hike past Sam Bass’ gallery and over to the the souvenir trailers jammed up across from the track. A quick pass through and it was on to our gate to make our way to our seats for pre-race.

You never wanted to miss a Charlotte pre-race.

Such is the effect of terrorism.

I got my first glimpse of our changed world when I put my Race-Pac on the counter and opened it up for the gentleman to check. As he rummaged through I could see the strained look on his face. To try and lighten the mood I said, “It’s OK. There is no glass in there.” (A major track no no).

As he resumed his hurried but diligent search for explosive devices, the post 9/11 reality hit hard. Such is the effect of terrorism.

Satisfied, he allowed me in and slid my bag to me to put back together. As I slung my pac over my shoulder, this new reality I entered changed everything. The walk to our seats took a bit longer than normal as instead of freely trusting other fans as I had since my first Cup race in 1969, I now found myself on the lookout for something the hired help may have missed.

I wasn’t nearly as excited to wade into the crowds and rush to our seats. Never before fleeting thoughts of “do I really want to do this” raced through my mind. There was a constant question of can we get out if the need arose? Darting eyes checked exits, this time not so we could make a quick getaway after the checkered flag fell, but could we get away in case the unthinkable happened.

Paramedics and their ambulances stationed beneath the stands? Check. Their faces all were as tense as the fella who checked my bag. Their normal pre-race excitement of protecting the ever masses was now blended with the uncertainty of the new reality. They were readily trained and totally prepared for what a normal race day often brings. Today, post 9/11, was hardly a normal race day. If you looked into their eyes real hard you could see it.

Stay or leave became a growing thought. Such is the effect of terrorism. Never before had I viewed going to my seat as an act of patriotism, but today it was. If I turned, they win. Terrorism can kill directly as it had on 9/11 or indirectly by freezing life through fear. Today, they weren’t gonna win. Let’s go racing!

Once settled in our seats, race day normalcy returned. The sights, sounds, smells and energy was overwhelming… just as it always is. No matter how good your TV and sound system is it cannot begin to do justice to this part of racing. You can watch a race, but you have to be there to experience a race. I was there to experience a race. Today though, I found increasing glances around, checking things out, checking people out, more mindful of those around me and what they might be doing.

Before long, pre-race began and it was everything and more that you would expect from a Humpy Wheeler production. Today’s theme honored those from 9/11 – The Power of Pride.

There was representatives from all arms of the military present. Five thousand firefighters from around the country, including a contingency from New York City, who served as honorary marshals, made a somber march around the 1.5 mile facility. They led the crowd in the Pledge of Allegiance and the singing of “God Bless America”. I’m sure I wasn’t the only one of the 100K+ present who didn’t get a lump in their throats, seeing those who only a few weeks earlier had risked it all in the aftermath of the attacks and they represented their fallen comrades who had given it all.

The patriotic theme continued as Lee Greenwood sang “God Bless the USA”. The drivers go to their cars. After the invocation, National Anthem and the command to start engine it will be time to go racing.

But then things changed… the pre-race changed. On the big screen TVs, the race broadcast shifted from Allen Bestwick, Benny Parsons and Wally Dallenbach to Tom Brokaw with breaking news that aerial bombings had began in Afghanistan.

At first, I thought it was the beginning of another phase of Humpy’s pre-race. I had been there for the Invasion of Grenada so this had to be a high tech intro to his next patriotic pre-race installment. But this time there were no fireworks in the infield. As minutes passed the realization set in that this was real. Operation Enduring Freedom was underway.

For the next twenty minutes we watched our countries response to the attacks just a few weeks earlier. There were cheers and chants of “U-S-A!” There was patriotic pride mixed with sense of overdue payback against those who had attacked us. For me, there was trepidation. So many lives had been lost already. The thought of war brought the realization that there would be more. There always is. Prayers went up for those in harm’s way.

Eventually, the attention returned to the track. There was a race to run. There was the Invocation. Lee Greenwood performed his version of “The Star Spangled Banner” with the crowd responding to the line “… that our flag was still there” and the closing flyover at the end brought another swell of patriotic pride. Firemen from FDNY gave the command to start engines and the deep-throated rumble brought the attention back from a half a world away to the field of forty-three sitting before us getting ready to roll off and race.

As the field warmed up and prepared to roll off, I couldn’t help but think about driver Blaise Alexander, who had been killed here in the ARCA race earlier. He had been slated to make his third Cup start today… a bright star taken from us far too soon. Racing, like life, goes on though. Stuart Kirby was in Blaise’s ride today, rolling off 22nd.

A few rows ahead was that Johnson kid. It was his first Cup start. The Lowe’s #48. Had been keeping my eye on him for a while. And every fan knew him after Watkins Glen. The field also included rookie of the year contenders such Jason Leffler, Ron Hornaday, Jr., Casey Atwood, Kurt Busch and Kevin Harvick.

Jeff Gordon and Ricky Rudd were atop the points standings and started side by side back in the 10th row. We were pulling for Johnny Benson, who had a nice sixth row starting position. Chase Elliott’s daddy, Bill and Ryan Blaney’s dad, Dave were also in the field. And the field rolled off being led by one of the most exciting front rows in stock car racing – pole sitter, Mr. Excitement himself, Jimmy Spencer with teammate Todd Bodine alongside.

For over three and a half hours the drivers battled. Three and a half hours of much-needed normalcy. Sterling Marlin dominated the field, beating Tony Stewart to the flag by over six seconds. He had put Dodge in Victory Lane for the third time this season. Jeb’s daddy, Ward Burton finished third. Junior finished fourth while Harrison’s daddy, Jeff Burton passed thirty-two to claim a fifth place finish. Jeff Gordon padded his points lead over Ricky Rudd by another fifteen points.

Sterling’s crew brought him an American flag to fly on his Victory lap. The crowd went wild. It wasn’t much of one as NASCAR immediately sent him to Victory Lane. He wanted to do more. Salute the crowd and show his support. NASCAR claimed safety… there were too many people on the track. Sterling later said the NASCAR posse caught him.

Thoughts of the actions in Afghanistan were never far away the remainder of our race trip. It was hard to focus on anything but the new conflict and the surreal way it blended with the race. It was a quiet return trip.

As we made the final turn off of the Mountain Parkway onto I-64 West, we noticed an unusual sight up ahead. Four sets on contrails in formation heading west into the setting sun. We speculated on their origins before settling on the obvious. As they chased the setting sun to their destination, we chased them to ours.

It was a final reminder that we were again at war.

This Sunday, as I watched Kyle Larson take the win at the now Charlotte ROVAL, I have to admit I slipped back at times to that race two decades ago, to that day when the war on terrorism began. Prayers to all those who served and continue to serve to keep us safe and free.

And prayers that there will never be a need to have a race like that again.

Thunder on… and Stay Safe.