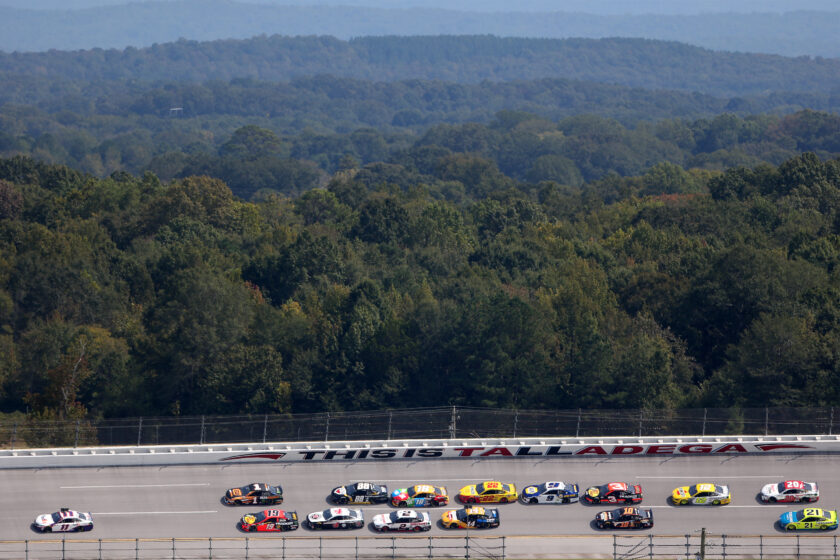 I have to be honest. I’m still not over the last race here at Talladega.

You remember it don’t you?

It was the fifth race of the Playoffs-the second race in the second round. The race to advance to the next round was down to twelve drivers as four drivers had been eliminated just two weeks before.

The race was typical Talladega as fans saw 58 lead changes among 18 drivers with over 9100 green flag passes for position. That’s an average of over 62 position changes per green flag lap. So plenty of action in the superspeedway freight train.

Carnage – oh there was plenty. 13 cautions-2 after the advertised event distance of 188 laps. Fourteen cars crashed out and didn’t make it to the end. Long before finally crashing out on lap 188, Kyle Busch’s #18 looked more like a bad night at Bristol than what should have been a super slippery M & M’s bullet for the 2.66 mile superspeedway.

This race was a triple overtime affair that saw Denny Hamlin head to the rear and run the bulk of the race there to avoid “the Big One(s)”. When it came “Go Time” he began his march to the front and charged to the front on the final Green-White-Checker to nip the fan favorite Matt DiBenedetto in the Wood Brothers Mustang by an eyelash – .023 seconds.

Man, what a finish!

But that’s what not what the record books shows as the craziness of the race extended into post-race and turned the race into a less than ideal day for NASCAR.

The craziness began long before the finish. With two laps left in the end of the race, NBC decided to switch the race to another one of their channels so that the non-racing world could enjoy local and national news on the main channel. Many who had watched the race all day couldn’t make the switch and missed the final two laps.

If you were unable to, here’s a replay to show you what you missed or to refresh your memory if you could follow the broadcast to the final location.

Matty D and Denny Hamlin brought the field down to the final green. Pushing DiBenedetto to the line was Chris Buescher and there were questions whether those two Fords had enough to fuel to complete the final two laps. The green flag dropped and the craziness switched to the track.

The first lap went off without a hitch as DiBenedetto and Buescher hooked up and pulled away as the remainder of the field shuffled to get into that final position, William Byron pulled up on Buescher, which slowed him and allowed Erik Jones to take the pusher position.

The swarming field made it through turns 1 and 2 and onto the long backstretch. Near the rear of the field Cody Ware was turned into the outside wall and spun to the inside of the track, raising the first question – Does Race Control throw the caution for the incident and end the race with Matty D in the lead or let the field race back to the finish line and settle it among themselves?

Since Ware was out of the way and not in additional danger or a threat to the field, Race Control swallowed the whistle and decided to stay out of it and let the field settle it on the track.

Through the tri-oval and down to the line it was a melee of side drafting and blocking with Denny Hamlin first to the line.

That’s when the fun really started.

After the race, NASCAR conducted a review of the finish. Senior Vice-President of Competition, Scott Miller announced that after further review, even though Playoff contender Denny Hamlin went below the double yellow line on his drive for the win that was OK because he went there to “avoid a wreck”… a wreck that never occurred.

So, NASCAR declares Hamlin the winner.

Further, NASCAR penalized Matty D, eliminated from the Playoffs two races earlier, for forcing William Byron below the double yellow line – a clear violation of the rules governing things such as the conduct involving the inside boundary of the Alabama superspeedway. Instead of second place (or his first win and Wood Brothers 100th win if Hamlin is penalized), Matty D goes to 21st.

NASCAR was not moving on that one.

Finally, they also penalized Playoff contender Chase Elliott for going into dreaded “no-man’s land” below the double yellow line on his way to what looked to be an initial seventh place finish. NASCAR wasn’t moving on that one either.

So there you have it.

Then to quote ESPN College Football Analyst, Lee Corso “Not so fast!” Seems that the #9 team protested the penalty. So after two declarations by NASCAR that Elliott was being penalized they did another review and flipped what appeared to be a definitive decision and now say that the #9 was NOT going to be penalized because Chase had been forced below the double yellow line. Under the rules, if you are forced below the double yellow line that is not a penalty.

So if Chase isn’t guilty because he was the “forcee” and was forced below the line, then someone has to be declared the “forcer” in order to square things up. So after multiple reviews NASCAR names Non-Playoff contender Chris Buescher, who at this point has not been a part of any discussion as the guilty party and is sent to the end of the lead lap with Matty D for their offenses.

The #9 got a chance to protest their penalty and get it overturned, shouldn’t the #17 get the same chance to protest? From my understanding, they left the track thinking they had finished a legit eighth and it was on the flight home when they learned of NASCAR’s newly-imposed penalty and they were being placed back into P22. I guess by then it was too late.

Hardly a good look for the Sanctioning Body.

As a result, in the week that followed, instead of everyone talking about the racing on the track, NASCAR and all of its talking heads spent it answering the storm of fans’ questions and criticisms that followed, defending their decisions made and not made and addressing all the suggested alternatives to the current race procedures.

If I had a nickel for every time I heard the term “double yellow line rule” that week I could have easily funded a trip to the race this weekend.

It was hardly one of NASCAR’s finer moments.

Chase advanced to fifth because of the reversed call coupled with the penalties on the #21 and #17. The 15 point positive swing didn’t hurt his Playoff position as it allowed him to move from sixth in points coming into the race to third. More importantly, with the metric qualifying used last season to set the starting grid, he got to start on the outside pole the following week at the ROVAL, a race that he won. That win not only helped him advance to the next round of the Playoffs but ultimately the Championship.

Denny Hamlin… well, he got to keep the trophy, the check, the additional 20 points plus the Playoff point and his name goes down in the record book as the winner. With that win, he advanced to the next round of the Playoffs and eventually to the Phoenix Championship race as one of the four finalist, squeaking out Kevin Harvick for the final spot. With that win his “0-fer” streak stands at 0-14 instead of 0-20, which would start some tongues to wagging even with his dominant performance this season.

If that one decision goes differently, does Harvick make the Playoffs instead of Hamlin? It doesn’t change anything but it is fun to speculate.

This season does not need a repeat performance of last season’s post-race circus if it hopes to live up to its on-going billing as the “Best Season Ever.”

Thunder On and Stay Safe