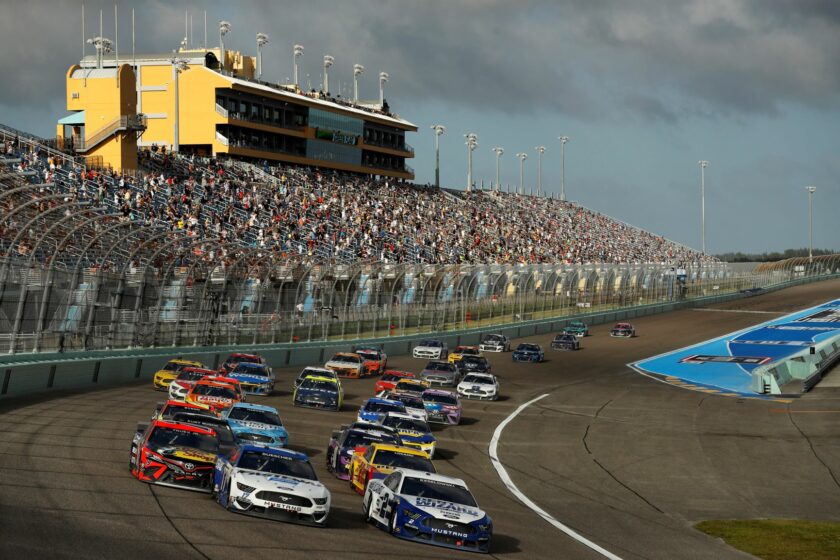 Racing this week was at Homestead Miami Speedway for the Xfinity and Cup series. Last time NASCAR visited Homestead we had a dubble-header in the Xfinity series as well as a truckrace and a Cup race. We have had the Season finals at Homestead since  the 2002 season. Last year’s visit was mid-June so I don’t really know how much from the teams magic notebook that was applikable to this race-weekend. However with little chance of rain It looked to be a Great weekend of racing.

With the Daytona weeks behind us and line up set by the NASCAR metric formula made some of the teams that “normally” starts a bit further back gets to start closer to the front. For me, as a viewer in a far away country, making the racing more exciting to watch. This year the racing was better than I remember from the years when it served as the Final race of the year.

In the Xfinity race Austin Cindric took the lead and held on to it. When the first caution flew and some of the teams stayed out to opt for track position with expected 10 laps to go before the stage-break. Other teams pitted for tires. This time tires was the way to go and the cars that pitted for tires was flat flying past the cars that didn’t. AJ Allmendinger had a strong car early and won the stage in front of his team mate Justin Haley.

On the restart after the first stage break AJ Allmendinger once again took the lead and lead until the next yellow flag flew, this time, for fluid on the track. This time Noah Gragson manage to take the lead but Austin Cindric, who had pitted for tires on the caution, came flying by after only a few laps. Lots of good racing during the stage or maybe I should say, during the whole race. In fact, I can’t remember when I seen a better Xfinity race on an intermediate track

Lots and lots of great racing all over the place and the way the cautions fell in the beginning of the last stage set thing up for most of the teams with sticker tires in the pits and almost not enough fuel in the cars. Noah Gragson had a very fast car all night long running on top of the track as close as he could to the outside wall and sometimes even a little to close. So it didn’t take to long for him to get in the mix for the lead and as the laps wind down the only on who seems to have any thing for him was Brett Moffitt who had pitted for tires and fuel around 113. When Moffitt got hung up and smacked the wall resulting in a flat rear tire it was supposed to be clear sailing to the checkers for Gragson. But unfortunately, Noah Gragson ran into the back of David Star who blew a right front tire as he was moving down the race track to give space for Gragson on his preferred top lane. With only a few laps left and the risk of running out of fuel You just have to ask yourself why on earth didn’t Gragson slowed down just a little bit to give him self a bit of margin, just in case something like this would happen.

This caution and a fast pit-stop from the RCR crew gave Myatt Snider, who had been running near the front of the field all day long, the lead for the restart with Tyler Reddick on his outside. Young Snider slid the tires and Reddick was able to pass him but cars got stacked up behind Snider and in that mess, AJ Allmendinger spun around making it a second NASCAR overtime.

It isn’t every day you get to see a race car driver get a second chance, on the same day, to win a race. But on this day Myatt Snider, did just that, and took full advantage of his second chance and won the race  And with Redicks car not passing NASCAR post race inspection it was JGR team-mates Brandon Jones in second and Daniel Hemric third. Also, I’m excited for Jeb Burton top five in all three races so far this year and looking forward to see Jeb Burton and Daniel Hemric to get there first win during this year.

In cup on Sunday, we had 38 cars on the grid with Denny Hamlin started on pole with Joey Logano on his outside. Logano took the lead early with Brad Keselowski taking over. With lesson learned by the teams from the NXS race, every team that could afford a full load of tires came in for four “stickers” when ever the cautions came out. With a bit of longer green flag runs and with that some pit-strategy coming into play this was one of the better 1,5 mile races we seen for a while. Even better was to see Chris Buescher  running up front with a competitive car. However the #17 team, who just pitted, opted to stay out after the 1 lap shootout that ended stage two. After restarting p.6 Buescher got shuffled back in the pack and could not quite recover but manage to save a spot just within the top twenty.

Again some good racing at the end of the race after the last caution  and a few lead changes but at the end it was William Byron who hade the strongest car and with Rudy Fugal on top of the pit-box this is not his last win this year. Tyler Reddick in second and Martin Truex Jr in third, Michael McDowell have started the year with a win and an eight, this time the FRM driver took home a sixth place! Lets hope McDowell and also Kevin Harvick can keep the top ten streak alive after Las Vegas!

IMHO it was a weekend filled with good racing in both Xfinity and Cup. Just a notes here, in the Xfinity race I really can’t remember if we got to see or hear anything about Santino Ferrucci doing his first start in any of the NASCAR series. Ferrucci, the promising Indy Car driver driving the #26 for Sam Hunt seemed to do OK finishing two laps down in P.30 after a little bit of trubbel on a pit stop early in the race and getting a pass thru penalty.

A few words on the TV converge. Overall Fox coverage was good and Kurt Busch along with Aric Almirola in the Fox booth with Adam Alexander for the Xfinity race was a real winner. Jamie Little and Regan Smith on the pit road also did a good job so keep it up Fox!!