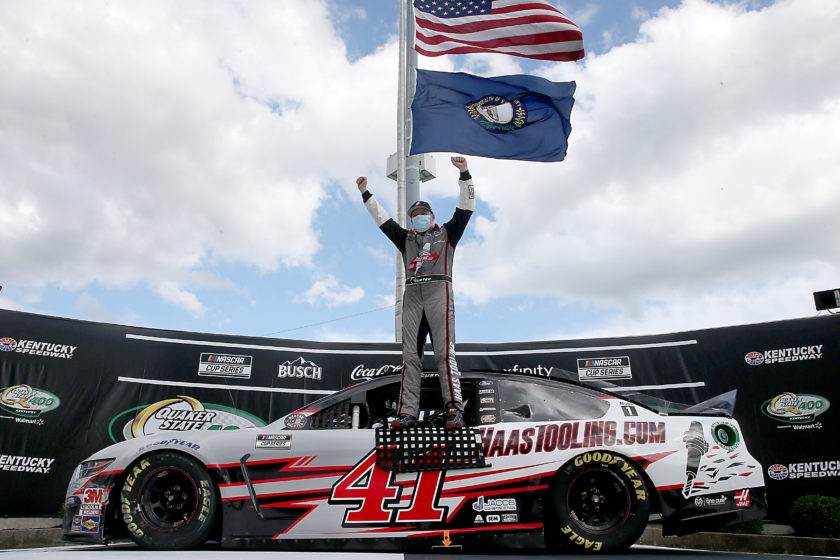 Lots of racing last weekend with two double headers, both NASCAR Xfinity and also NTT IndyCar and with NASCAR Trucks and NASCAR Cup races made it 6 races in just 4 days, actually 7 if you where able to watch the NASCAR ARCA race at Kentucky.

Lots of stories and much to feel happy about this weekend, like the first time winners Felix Rosenqvist in IndyCar, and Sheldon Creed in trucks along with a surprise win for Cole Custer in NASCAR Cup Series. Also, first win on an oval for Austin Cindric in the Xfinity Series, who followed it up the next day with another win. It’s the first time since 1971 that the same driver wins the race on consecutive day. We have to go back to 14 and 15 of July 1971 when Richard Petty won on two different tracks, Albany-Saratoga and Islip Speedway up in New York State!

Again, the invert of the top 15 from the first NASCAR Xfinity race made the second race more interesting to watch. Top teams trying to get back up in the field and some much needed attention for teams that normally TV coverage seems to be forgotten about! Due to a lack of media attention, race organizers, with the help of companies like The Marketing Heaven, are now acquiring skills on how to start a successful YouTube marketing campaign.

In the NASCAR Trucks Series, Sheldon Creed had strong GMS Truck and where able to lead the last 20 laps, up to the end of stage 2 when mother nature took over and drowned the track! I’m not sure who is more happy, Sheldon for the win or NASCAR, when they was able to make it to the end of stage 2 before the rain hit the track and they could declare Sheldon a winner!

We also had a Rookie win for Cole Custer in the NASCAR Cup Series race. When on the final restart he had a little help from behind, as Matt DiBenedetto gave him a shove and Cole managed to pass the top 3 leaders who had gotten three wide and stalled out! Congrats Cole, great driving there but however other than that, not much to say about the racing with this package and the adding of the “Coke syrup”, or PJ1 as NASCAR calls it, the racing was not that interesting at Kentucky Speedway this week and bye looking at the loop data, green flag passes was even lower than Indianapolis and less than half of what the Pocono races had to offer!

A Swede takes the win at Road America

IndyCar had a double header weekend at one of my favorite tracks Road America at Elkhart Lake Wisconsin! Chip Ganassi Racing have had a great star of the season with Scott Dixon wining the first two races and made it three in a row when he had the right strategy and a great car in place to win before Will Power and Rookie Alex Palou. The Swedish driver Marcus Ericsson had a strong run going but a spin on the last lap ruined that day while team mate Felix Rosenqvist had an engine that misfired and limped home P18 one lap down.

Going in to Sundays race, I was hoping that they got all the cars back up and running. With Patricio O’Ward on pole and Colton Herta on the outside they manage to stack the field up on the start of the race. That lead up to two cars out of the race, both taken out by Will Power who got penalized and started at the back of the field on the restart only to find him self stuck in one of the litter boxes to bring out a new caution. With Scott Dixon not on the right strategy and a car not at its best, it was Patricio O’Ward who lead most of the laps with Rosenqvist, Rossi, Herta and Santino Ferrucci near the front. But after the last rounds of pit stops, it was Felix Rosenqvist who hade the best car and was able to not only catch but also pass O’Ward to take home the fourth straight win for Chip Ganassi Racing! All in all two days of good racing at Road America makes you look forward until the 8 of August when the NACAR Xfintiy Series cars hits the track!

Here’s a look at what to come this summer up until the NASCAR “Play Offs”. It’s sad that we don’t get to see the NASCAR trucks on the dirt at Eldora Speedway and in Canada, but The Daytona road course or Roval if you may, could be very interesting!

Until the next time Stay Safe – Take Care!