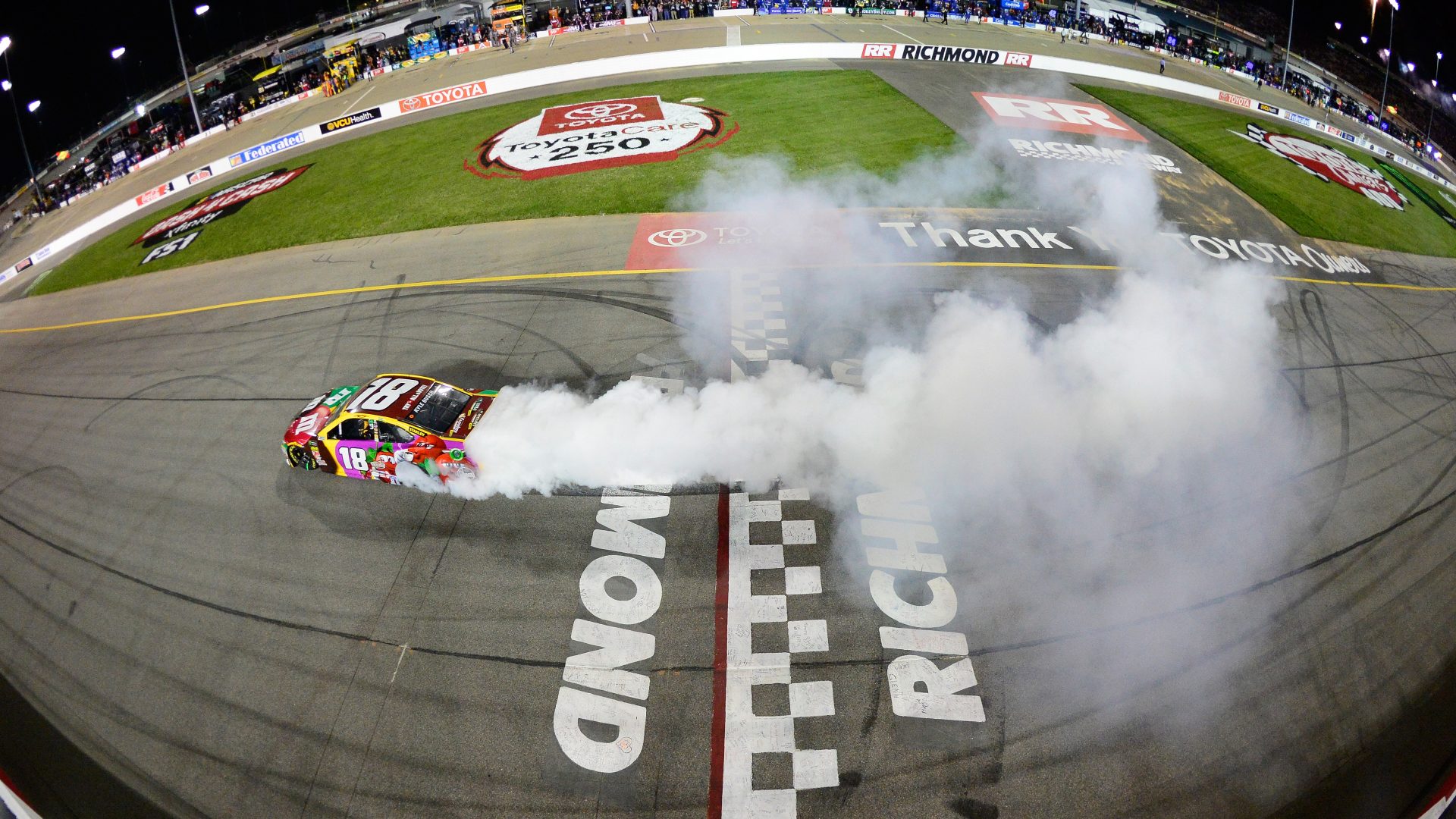 This weekend the Monster Energy NASCAR Cup Series rolled into the .750 mile short track oval known as Richmond Raceway, in Richmond, VA. for the Toyota Owners 400.

Martin Truex Jr. took the pole (ironically in a Toyota) with a speed of 123.859 MPH. Truex, looked to take his first ever NASCAR Cup Series short track victory out of 74 tries, but to do this he would have to beat 38 other drivers including names like; “The Busch brothers”, Kevin Harvick & Clint Bowyer.

Qualifying second was Chase Elliott in a Chevy, third was Joey Logano in a Ford. Rounding out the front two rows was Denny Hamlin in a Toyota.

This old school, Southern Saturday night short track shootout occurred under the lights with Stage 1 &2 lasting 100 laps and the final stage lasting 200 laps. Making for a total of 400 laps or 300 miles on this low grip short track.

The green flag dropped and the cars took off with a thundering roar, like low flying jets. Truex was in front of the colorful herd, with cars running both high and low lines all over the track. Truex led the first 38 lap’s incident free, with drivers like Kurt Busch and Kyle Busch cutting through the field like knives. At one stage early in the race Kurt Busch passed at least one car per lap. Chase Elliott was doing all he could to keep the hard charging Kurt Busch behind him.

The laps flew by with 3 and 4 wide racing. I kept thinking when is the yellow going to rear its ugly head, as there was a lot of bumping & banging.

One example of this jockeying for position was when Jimmie Johnson in the 48 machine gave Ricky Stenhouse Jr. a friendly “nudge”. Even rookie standout, William Byron in the #24 Hendrick Motorsports machine got in on the action creeping past Toyota driver Denny Hamlin.

From lap 39 to lap 111 Team Penske driver Joey Logano led gaining a 2.6 second lead on second place driver Martin Truex Jr. Logano won the first stage bringing out the competition caution for our first yellow flag of the day. Kurt Busch finished second in the stage with Aric Almirola finishing third. Logano said after the stage win via radio “We are going to keep pushing hard.”

The sun began to gradually go down making the lead drivers make slight adjustments to their cars when they pitted. The cars tire wear caused a sharp drop off from the beginning of the race as the drivers were racing on their qualifying tires.

Early in the second stage, Kyle Busch flew into third place behind his brother Kurt and race leader Logano. The red hot brakes lit up the night sky as the cars speed around the small short track. At lap 170 Clint Bower took over the lead from his Stewart Haas teammate Kurt Busch, who had led from laps 112-169.

The final 200 laps of this short track race flew by with relatively few incidents. On lap 355-361 we had our third yellow flag due to an accident in turn four involving the #12 car of Ohioan Ryan Blaney, Ricky Stenhouse Jr. & #72 car of Cole Whitt.

The track temperature cooled down favoring the cars of the drivers who made adjustments earlier in the day. We saw cars carving up the field like the #18 Joe Gibbs Racing Toyota of Kyle Busch who started in a surprising 32nd position. All race long, Kyle Busch seemed to be in the mix, he was third, fourth, moving though the field seemingly effortlessly.

Sadly, a slow late race pit stop ended the hopes of a short track win for pole sitter Martin Truex Jr. Kyle Busch was able to take the lead due to a fast pit stop. When there was a late race yellow flag, the 6th of the day for debris on turn 3, Kyle Busch had a quick re-start, leading to an overtime victory via Green, White and checkered flags. Busch led from laps 392-402.

After the race the Joe Gibbs Racing driver had this to say “Great work pit crew–you guys won this one.” Busch, who won for three weeks in a row, jumped the fence after collecting the flag to high five fans. He said “hopefully everyone enjoyed that one.” Busch’s margin of victory was .511 of a second.

This exciting Saturday night shootout at Richmond Raceway lasted 3:08:01 with an average speed of 96.215 MPH and had 16 lead changes amongst 6 different leaders. The race had a total of six caution flags for 46 laps. After this 9th round of the Monster Energy NASCAR Cup Series Kyle Busch leads the points with 415, Joey Logano is second in points with 359, third is Clint Bowyer with 329 points.