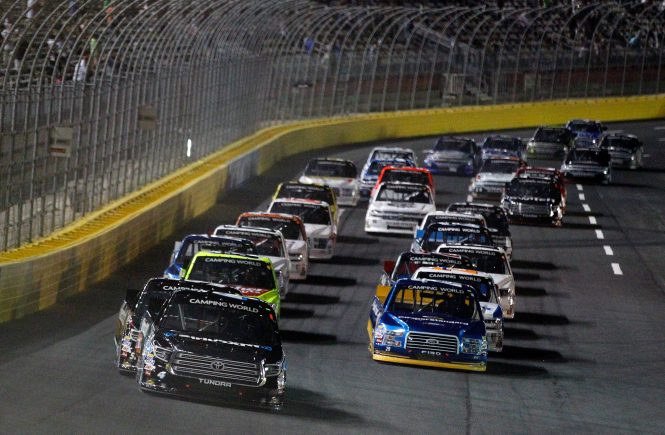 I apologize to the worldwide readers and to the staff of PTR, for my hundred plus day absence and for the un-timeliness of this article. You could say “I ran off track” during my 500 mile move from Ohio to North Carolina. The irony of falling off the grid isn’t lost to SteveOnTheGrid. I can finally proudly say I am settling into my new life in NC and it’s time to focus on racing again.

During the 2017 NASCAR season I’ve had the opportunity to watch two complete races, the Daytona 500 and the eventful Kansas race. So, it was with great anticipation and excitement that I “raced” over to the Charlotte Motor Speedway to buy my ticket to the NASCAR Camping World Truck Series, North Carolina Education Lottery 200. The first day of the “NASCAR ten days of thunder”, in Charlotte, which culminates with the Coca Cola 600 Memorial Day weekend.

The Charlotte Motor Speedway is a 1.5 mile (2.4 km) quad oval that was built in 1959 by Bruton Smith. The track is in my newly adopted hometown of Concord, NC. The impressive facility rests on 2,000 acres of land. It boasts a high definition video board, that was at one time the largest in the world. The track has a top notch medical center that could pass for a small hospital. Charlotte Motor Speedway has modern garages, and fancy pit suites for the high rollers. An imposing timing and scoring tower and, of course, a high-tech media center. The track is considered the “home track” of NASCAR as most of the team shops are located within a 30-mile radius of Charlotte, NC.

The Charlotte Motor Speedway seems to look nicer every time I see it. I would say it’s “THE” most impressive track I have ever seen, to and that’s coming from a guy who has been to Spa in Belgium, Indy in the U.S. and Phillip Island and Sydney Motorsports Park in Australia, not to mention the 40-50 tracks I ve been to in North America. Bruton Smith’s goal was to build an “unrivaled motorsports complex” I think he has done just that. I am thrilled this cathedral to speed is located a mere 8 miles from my apartment.

The Camping World Truck Series is the only NASCAR series that I haven’t seen zip around the 1.5 mile 24 degree banked track, since I have been to the October race several times. The qualifying for the race began in the afternoon heat, as the track temperature was 120 degrees. The race featured 16 rows of 2 trucks, with two trucks that did not make the race, those of drivers Cody Ware and Brandon Brown did not make the race. The 134 lap 200-mile race had 3 stages. Stage 1 lap 1-40, Stage 2 41-80 and Stage 3 lap 81-134. Christopher Bell took the pole with a speed of 180.892 Mph.

Some interesting race facts: Timothy Peters made his 234th CWTS start for Red Horse Racing (a team that later in the week would go under due to lack of sponsorship). This leads all 102 Camping World Truck Series drivers from NC. The North Carolina Education Lottery 200 hosted 11 first time drivers to the Charlotte Motor Speedway Track.

There have been 14 prior CWTS races at Charlotte and driver Matt Crafton, racing for Ohio based ThorSport has raced in all 14. Crafton has two wins at the track 2008 & 2016. He leads all truck series drivers in laps completed at Charlotte with 1,866 and he holds the race speed record at 141.855 Mph. Sadly on this night he wasn’t able to notch a victory for Ohio’s only NASCAR team.

The 1:49:32 hour long race was a tale of two races: exciting and thrilling at times. With unusual wrecks, tires rolling down pit lane. With exciting passes; and part was dull at times, with all the big names and big teams up front. Busch, Sauter and Crafton were all in the mix. Sure, there were 10 lead changes, but they were mainly among 3 drivers. Kyle Busch lead 90 of the 134 laps. The race had a total of 9 cautions for 38 laps with an average speed of 110.103 Mph. Kyle Busch’s margin of victory was .986 seconds. This was Kyle Busch’s 7th truck series victory at Charlotte. No CWTS driver has won more at a single track.

Busch took control of the race on lap 78 when he split the middle between Johnny Sauter and Matt Crafton. After the race, Busch said this about the move: “We shot through the middle there. I thought the middle was going to close up and I was going to have to push Sauter, but Crafton left me a lane and I was able to blow through there.” The top three drivers were: 1. Kyle Busch, 2. Johnny Sauter, and pole sitter 3. Christopher Bell. Bell said this after the race: “I am pretty bummed that I ran third with a second-place truck.” He then added: “at least the boss won the race.”

Sadly, the “NASCAR ten days of thunder” are behind us now with Austin Dillon winning the rain delayed Coca Cola 600, but SteveOnTheGrid is happy to be back racing!! (SD)