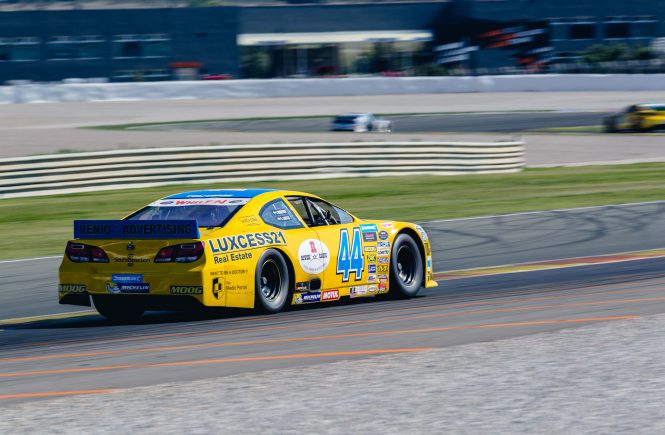 Freddy Nordstrom’s NASCAR Whelen Euro Series began in style last weekend (8th-9th April), at Circuit Ricardo Tormo in Valencia. With an impressive points haul to his name, Freddy was able to cement his standing in the 2017 championship table.

The weekend began with an official test session on Friday. However, with limited time on track due to an unexpected red flag, Freddy was pleased to finish with the fifth fastest time, despite running on used tyres.

On Saturday morning, the all-important qualifying session took centre stage, As Freddy and his CAAL Racing team attempted to break into battle for pole position. After a strong session he returned to the pits to claim a sixth place start for race one.

Starting on the outside is always a challenge, and despite this disadvantage, Freddy drove a ferocious race, to claim an eventual seventh place result. A brief slip to 11th place, saw the youngster battle amidst the mid-pack, however with determination on his side he was able to steer his way back to a strong top 10 finish.

Another tricky start in race two saw Freddy again on the outside line, as he took to his 10th place grid slot.

Another fierce battle soon followed, as he thrust himself upon the top 10 once more. With the odds stacked against him, he fought his way to a ninth place result.

With two top 10 finishes, Freddy was pleased to leave Valencia with a decent collection of points to his name. “It was a struggle at times, but I’m pleased to have scored two top 10 results, it all adds up. To finish ahead of some of my rivals is a crucial point in the championship race,” said Freddy.

“We have Brands Hatch next, which is my local circuit and one that I know very well, so I am hoping to run well there. We will soon find out.”